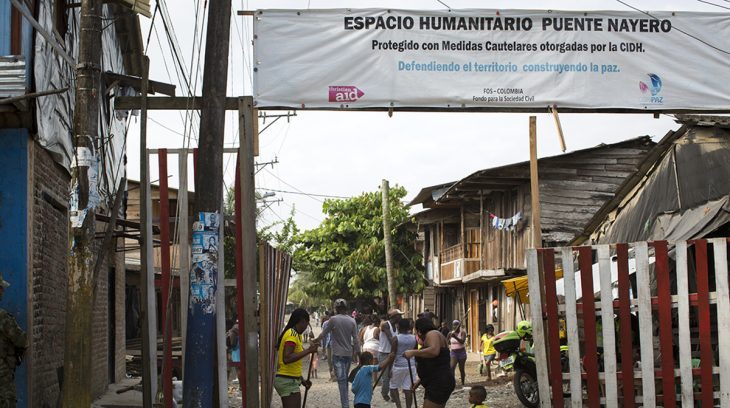 Duván Ballesteros was assassinated on the 5th April, one hundred metres from the community of Puente Nayero. The community, located in Buenaventura, Valle del Cauca, declared itself free from violence and armed groups, and created what is known as a ‘humanitarian space’ several years ago. JFC delegations consisting of British and Irish trade unionists have visited the community on numerous occasions.

On the same day as Duván’s murder, members of the community found a soldier smoking marijuana and offering it to a young person. A similar incident took place the day before, with another soldier offering marijuana to young people from the peace community. On both occasions, residents intervened, calling for the community’s space to be respected and for the immediate withdrawal of military personnel. Soldiers have also been seen repeatedly consuming hallucinogenic drugs in front of residents, particularly children and young people.

Puente Nayero is at high risk from the coronavirus pandemic due to the close living spaces and poor health provisions. The surrounding areas are controlled by neo-paramilitary groups and the lack of a state response to their presence means that the community is even more endangered by the virus. Valle del Cauca is one of the departments most affected by Colombia’s armed conflict. The community have demanded appropriate measures be taken against the army’s actions.