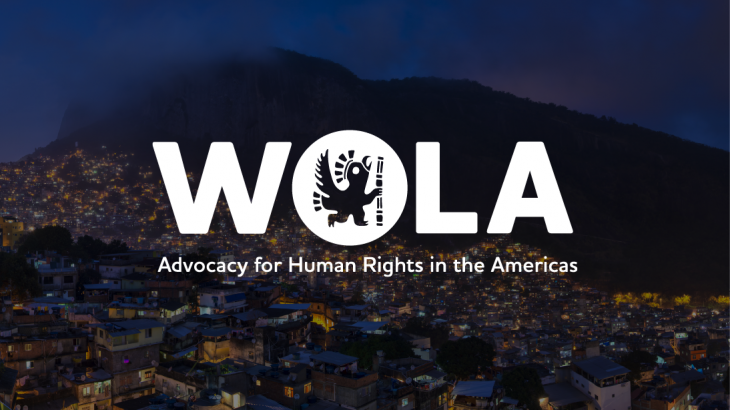 Below is a briefing by the Washington Office on Latin America (WOLA) on current human rights abuses committed by state and non-state actors in Colombia.

Today we write you to ask that you intervene in the following human rights situations:

WOLA is saddened to report the loss of two of its partners that form part of the Ethnic Commission for Peace. We urge that there is justice in the murders of Don Temis, Afro-Colombian community leader with the Black Communities Process (PCN) and key organizer of the May 2017 Buenaventura civic strike and Embera indigenous leader, Eleazar Tequía Vitucay, killed by the Colombian armed forces.

On February 7, Sandra Yaneth Luna’s body was found dead with three gunshot wounds in the Campo Dos Township in Tibú. Sandra was a community leader and president of her Community Action Board in Tutumito Carboner. She had been missing since September 2017 when a group of armed men violently kidnapped her from her home. The perpetrators of this killing are still unknown, but ELN (National Liberation Army) and EPL (Popular Liberation Army) guerillas operate in the region. Authorities believe that the attack is due to a crime that Sandra reported in 2016.

On January 29, Nicomedes Payan was shot repeatedly and killed in the López de Micay municipality in Cauca for yet to be determined reasons. Nicomedes was known for his political leadership in his Afro-Colombian community and for his efforts to ensure the well-being and development of his community.

The Regional Corporation for the Defense of Human Rights (CREDHOS) reported that on January 30, Nixon Mutis was found shot dead in the Cantagallo Municipality in the south of Bolívar. Nixon was a member of CREDHOS and municipal facilitator of the agreement on the substitution of illicit crops.

The Movement of Victims of State-Sponsored Crimes (MOVICE) reported that on January 25, Humberto Manuel Escobar Mercado, Prisciliano Manuel Mercado García, and Manuel Eusebio Osorio Escobar were shot and killed for trying to reclaim their land. The three brothers’ land was illegally occupied by William Martínez who used force to kick them off of the property in 2016. Using a police warrant, the brothers went to trace the boundaries of their property when three men belonging to Martínez’s private security shot and killed them. This incident is part of a larger pattern of violence against land claimants as they try to return to lands that legally belong to them.

On January 30, the Titan Force Squad of the Colombian military bombed the Wounaan Indian Reservation of Chagpien Tordó in the municipality of Litoral de San Juan. While the military was carrying out an operation against the ELN, various community members were injured. Fearing further violence, the nearby communities of Santa Marta Pangala and Estrella Pangala became internally displaced to avoid becoming injured by confrontations between the military and illegal armed groups. In 2017, the same community was victim to various forced displacements due to armed confrontations between the ELN, military forces, and paramilitary groups. On January 31, the National Indigenous Organization (ONIC) issued a statement denouncing these forced displacements and asking the Colombian government to take adequate measures to protect the rights to life, integrity, and security of this community.

The Petroleum Workers Labor Union (USO) reported that on January 22, Wilmer Gustavo Pedraza, a former Ecopetrol S.A. employee, was murdered. The motive of the killing is still unknown. On January 21, prior to Wilmer’s murder, Victor Manuel Barrera, a sub-contracted electrician for COFIPETROL. Victor was accidentally shot and killed due to crossfire between an unidentified armed group and National Protection Unit bodyguards. The incident occurred in Arauquita during a crop substitution meeting. The armed men were targeting Henry Pérez and Juan Torres, demobilized members of FARC. Neither man was injured in the attack.

On January 18, two hitmen shot Iván Darío Gómez Tobón 4 times in his Medellín office. Police forces captured one of the assailants, Juan Camilo Benítez Ospina, later that day. His accomplice, Alejandra Carrasquilla Cárdenas, was arrested on January 24. The shooting was captured on surveillance cameras. Luckily, Iván survived the attack. The reason he was targeted is still unknown.

On January 27, María Cecilia Lozano, victims’ rights advocate, survived an attempt on her life in Villavicencio. While María was heading home, two persons on a motorcycle approached her. One of the riders attacked her, beating her to the ground and striking her with his knife. María is a survivor of the Mapiripán massacre, a Coordinator of the Network of Displaced Women from Meta (ASOMUDEM), and a social leader working on land restitution. Since 2016, ASOMUDEM has reported threats against their members to the authorities. To date, the government has been unresponsive.

The National Indigenous Organization of Colombia (ONIC) reported that on January 20, the Bokshí indigenous community was attacked by the ELN. Combatants fired at three members of the community as they travelled down the Oro River near the Colombia-Venezuela border. One person, Leonardo Castú was seriously injured. The community released a statement expressing concern that the presence of armed groups poses a threat to their territorial autonomy.

The Inter-Ecclesial Commission for Justice and Peace (Justicia y Paz) reported that on January 27, Rosario Anaya received information about a violent plot to stop her from returning to her land. In December, she was forcibly displaced when 30 armed men occupied her property and threatened her son’s life. On January 28, James Ruíz, a land claimant in Playa Roja, received a call informing him that armed men would kill him and the other 29 leaders in his community for being “government snitches,” and warned him that he’d never get his land back.

On February 3, Justicia y Paz reported that Dagoberto Pretel, an Afro-Colombian displaced leader, received a phone death threat while participating in a community meeting. The perpetrator threatened to kill Dagoberto or anyone else who tried returning to claim their lands. In April 2017, the community was displaced when ELN combatants entered the territory in the Litoral de San Juan Municipality and killed 5 people.

On January 26, human rights groups condemned the death threats against Luis Fernando Quijano, director of the Corporation for Peace and Social Development (CORPADES). Recently, Mr. Quijano received numerous threats to his family and his person for continuing to report on the presence of Mexican cartels and paramilitary structures operating in his region. While the Inter-American Commission on Human Rights already issued him precautionary protections, the Colombian state has not offered him any meaningful security measures.

On January 10, Aracely Cañaveral received a death threat letter from the Gaitanista Self-Defense Forces (AGC), a paramilitary group operating in Antioquia. Aracely is a former union leader of Sintratextil. Sintratextil forms part of the Central Union of Workers (CUT), and the Colombia branch of the World Federation of Trade Unionists (WFTU). On January 29, the WFTU denounced the threats against Aracely and systemic violence against social leaders in Colombia. According to the WFTU increased paramilitary violence is due to the upcoming elections.

On February 2, the Peace Community of San José de Apartadó reported that paramilitaries were present in their territory. On December 29, a group of paramilitaries entered the San Josesito settlement with the intention of killing members of the community. The group was unsuccessful, and citizens captured two of the armed men, confiscating and destroying their weapons. On January 30, two armed men on motorcycles drove through a section of the city firing their weapons and threatening to kill members of the community. The community asserts that this act was meant to threaten them and to show that they are immune from repercussions of the state authorities.

Verdad Abierta reports that AGC paramilitaries are circulating death threat pamphlets in Valledupar. These are targeting 18 members of social organizations and the communities they represent in la Nevada, los Milagros, Don Alberto and las Torres neighborhoods of Valledupar city. The security situation in Cesar Department has deteriorated rapidly since the FARC peace accord was signed. This pamphlet comes two weeks after 32 social organizations gathered and denounced the negative impacts of mining in this region and the need for authorities to step up actions to protect human rights defenders. These persons are under threat for calling for the implementation of the rural land reform portion of the peace accord. It is believed that paramilitaries are sending a message against those who plan to advocate for rural farmers’ and indigenous peoples’ land rights in Cesar.

On November 11, an unknown armed group killed one person and kidnapped seven more in the Inda Guacaray indigenous reservation. This attack caused the displacement of 85 families, totaling 261 people. On December 26, armed men fired guns to scare away the remaining 57 families; a total of 190 people were displaced as a result. On February 4, a member of this community was killed in the Inda Guacaray reservation. On February 7, the community denounced the presence of all armed groups on their territory and demanded that they respect their lives and autonomy.

On January 29, Sintracarbón union workers voted to hold a strike in response to the accidental death of Carlos Alberto Urbina. Carlos died when the mine that he was working in collapsed and he was trapped in the machine he operated. In July and August of 2017, 13 similar accidents left a number of workers injured. The company denies the workers’ requests to offer better conditions for subcontracted workers, and has not offered any proposal to advance safety, health, or environmental conditions.

On January 21, the General Union of Third-Party Agricultural Workers (UGTTA), which represents 1,010 subcontracted workers at Indupalma, declared a strike in San Alberto. This strike is a response to persistent refusal from the company to treat its subcontracted workers with respect and its subsequent refusal to negotiate with the workers. In the days leading up to the strike, UGTAA members documented at least four threats of violence and death related to members’ individual participation in the strike. The union is asking the Ministry of Labor to facilitate labor formalization negotiations between the union and the company.

A Popular Training Institute Press Agency (IPC) study supported by USAID concluded that mining companies in Segovia and Ituango routinely violate human rights. Between May and July 2017, IPC interviewed farmers, miners, business-owners, public officials, and community leaders to determine the degree to which mining companies in the region respect the rights to their workers and the communities they operate in. It found that companies like Gran Colombia Gold and Hidroituango create environmental harm and engage in forced displacements, threats against communities, and the erosion of cultural traditions. 69.2% of respondents said that the State’s institutions protect the interests of these companies over the well-being of the communities.

On January 30, thirty-three Human Rights Organizations issued a statement calling for peace in Colombia. These organizations reject the ELN’s recent attack on the police in Barranquilla; persist in calling upon parties to de-escalate the war, and urge the national government and the ELN to declare a new ceasefire. They stress that peace cannot be negotiated as fighting continues.

We thank you in advance for your attention to these important matters. Please contact us for further details if needed.

Director for the Andes