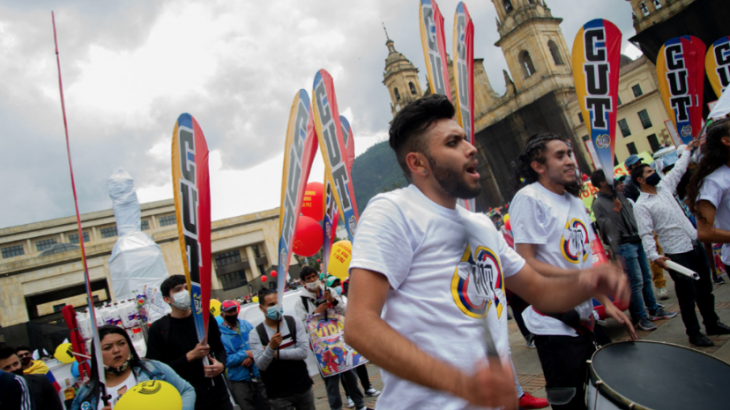 Trade unionists in Colombia faced higher levels of violence than anywhere else last year, as the country maintained its appalling record as the world’s most dangerous country for labour organising. Between March 2020 and April 2021, 22 trade unionists were murdered in Colombia, a sharp rise on the previous year’s tally of 14 killings. The alarming findings have just been published in the International Trade Union Confederation’s Global Rights Index 2021, which monitors anti-union violence and abuses against workers by governments and companies.

The increased number of killings of trade unionists in Colombia reflected a global crackdown on trade unionism, with the number of countries where authorities enacted anti-union policies or impeded their registration rising to 109 from 89 the previous year. Colombia retained its place among the ten worst countries in the world for workers, alongside Bangladesh, Belarus, Brazil, Egypt, Honduras, Myanmar, the Philippines, Turkey and Zimbabwe. Trade unionists were murdered in six countries: Colombia, Brazil, Guatemala, Myanmar, Nigeria and the Philippines.

In addition to facing violence in 45 countries (nowhere more so than Colombia), workers around the world commonly faced denial of freedom of speech and freedom of assembly (64 countries), restricted access to justice (65 per of countries) and arbitrary detention or arrest (68 countries), while they were also subjected to increased surveillance. 87 per cent of countries violated the right to strike, 79 per cent the right to collective bargaining and 74 per cent the right to join or form a trade union. The report also highlighted violations of rights committed in the wake of the pandemic.

According to the ITUC’s report, the majority of murders of Colombian trade unionists remain in impunity due to the government’s failure to allocate necessary resources for thorough investigations. Many trade unionists are at risk but are not provided with any protection, forcing they and their families to live under constant threat. Companies operating in Colombia deliberately targeted trade unionists for dismissal and the non-renewal of contracts. The ITUC highlighted abuses committed by the US-owned private security company Brinks, which fired eight unionised employees ‘in what appeared to be a deliberate anti-union strategy’.

The report also names the 22 murdered trade unionists registered by the ITC. They were:

JFC has documented several of these appalling crimes, while British and Irish trade unions also responded in several cases. One notable case was the murder of 18-year-old Jayder Quintana in October last year. Jayder was a member of the FENSUAGRO agricultural union, which has a formal partnership with Unite the Union and which has seen around 35 members killed since late 2016. Jayder met with delegates of the Justice for Colombia Peace Monitor which visited Colombia’s Cauca region in May 2019 to hear about human rights abuses there. His murder elicited responses from Irish and British parliamentarians who had participated on the delegation. At least three of the other victims – Hamilton Gasca Ortega, who was murdered in his home along with his two young sons, Erminso Trochez Ilamo and Nelson Ramos Barrera – were also affiliated to FENSUAGRO, while Omar Moreno Ibague was the brother of a leader in the union.

Anti-union violence is a major factor in Colombia’s appalling record for overall labour conditions and rights. The National Trade Union School (ENS), a Colombian labour rights organisation, has documented the murders of 3,280 trade unionists in the country between 1971 and 2018. This has contributed to very low rates of union membership, with only around 4-5 per cent of the workforce unionised. Consequently, policies which reduce standards of pay, benefits, conditions and safety face lesser opposition as they are pushed through by politicians who consistently prioritise the profits of big business over the interests of ordinary people. The pandemic is one clear example of this, with more than five million Colombians estimated to have lost their main source of income with virtually zero state support.

Download or read the ITUC’s Global Rights Index 2021 below