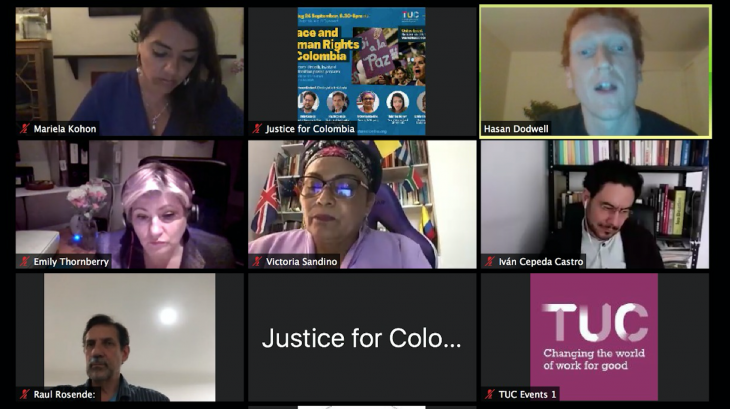 Watch the full video of our recent event co-hosted with the TUC.

On 24 September 2020, Justice for Colombia (JFC) and Britain’s Trades Union Congress (TUC) hosted an online event on the current situation around human rights and peace in Colombia.

Colombia’s peace process brought hope to millions of people. However, its implementation is taking place in a human rights crisis that is seeing social and community leaders and former FARC guerrillas murdered at an alarming rate.

We are joined from Colombia by some of the most significant actors in the peace process to hear an update on the situation and to explore how the international community can work to support it and end human and trade union rights abuses in Colombia.

Iván Cepeda is a Colombian Senator for the Democratic Pole Party, a leading voice for peace and justice and an outspoken human rights defender.

Raul Rosende is Director of Verification for the United Nations Verification Mission in Colombia, mandated by the UN Security Council to verify the implementation of several of the agreement’s key chapters.

Victoria Sandino is a former FARC commander and peace negotiator who led on the inclusion of gender equality into the agreement and now sits in the Senate for the FARC political party.

Mariela Kohon was an advisor to the peace negotiations in Havana and in Colombia and is now Senior International Officer at the TUC.

The event is chaired by Justice for Colombia, a British-Irish organisation that campaigns with parliamentarians and trade unions for peace and social justice in Colombia.