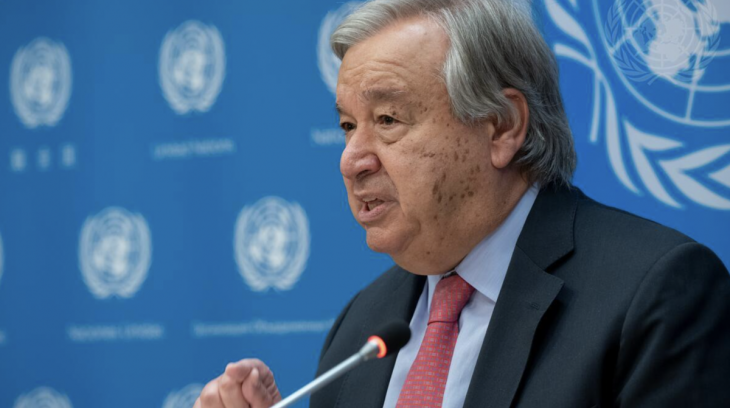 Bogota, 6 January 2023. In his latest report on the UN Verification Mission in Colombia, covering the period from 27 September to 26 December 2022, United Nations Secretary-General António Guterres affirms that, during the first months in office, the new government has taken steps that attest to its determination to advance towards the consolidation of peace in Colombia. “I am pleased that the comprehensive implementation of the Final Peace Agreement is at the core of its efforts,” says the Secretary-General.

For the Secretary-General, the Government’s outreach toward rural populations and the agreement it reached with the Cattle Ranchers Association for the purchase of land intended for the comprehensive rural reform are encouraging. “This is a clear demonstration that all sectors within Colombian society can and should contribute meaningfully to the implementation of the Agreement.” Furthermore, the Secretary-General highlights the participation of communities, including those affected by conflict and former FARC-EP members in the dialogues for the design of the National Development Plan, and trusts that “this instrument, which will guide public policy for the coming four years, incorporates concrete measures geared towards meeting their expectations for peace and development, and towards the implementation of the Final Agreement.”

The Secretary-General states that constructive dialogue between the parties is essential to move forward in implementation. In this regard, the Secretary-General welcomes the resumption of sessions of the Commission for the Follow-up, Promotion and Verification of the Implementation of the Final Agreement and other fora created by the Agreement to address key issues such as the implementation of its ethnic and gender provisions.

In his report, the Secretary-General notes that the Government’s comprehensive approach to peace implementation should be a boost to the reintegration process of the over 13,000 men and women former combatants who remain committed to peace. As a positive development, the Secretary-General highlights the recent resumption of the National Reintegration Council and the appointment of a new director of the Agency for Reintegration and Normalization and looks forward to the cooperation between the Government and former combatants’ representatives to act upon their shared responsibility to ensure the long-term success of the reintegration process. To date, 75% of accredited former combatants participate in collective and individual productive projects. Although 84% of women former combatants are involved in productive projects, many continue facing challenges to actively take part in decision-making.

Notwithstanding some of the positive recent developments, for the Secretary-General violence remains undeniably the greatest threat to the consolidation of peace in Colombia. Regions historically affected by a limited State presence, such as Arauca, southern Bolívar, Chocó and Putumayo continued to suffer the violent actions of illegal armed actors during this period.

Since the signing of the Peace Agreement, the Mission has verified the killings of 355 former combatants (11 women, 48 Afro-Colombians and 33 indigenous), 12 during this period (all men). In total, 50 former combatants (one woman) were killed in 2022, a decrease of 7.4% compared to 2021.

Violence against civilians, social leaders and human rights defenders remains of great concern especially in departments prioritized for the implementation of the Agreement. The Office of the UN High Commissioner for Human Rights received allegations of 244 killings of human rights defenders during 2022 (101 verified, 25 under verification and 118 deemed inconclusive). Indigenous and Afro-Colombian leaders, as well as members of local administrative boards, were the most targeted leaders. For its part, the Office for the Coordination of Humanitarian Affairs indicated that between January and November 2022, 78,154 people were forcibly displaced and some 108,665 were confined. Cauca, Chocó, Nariño and Valle del Cauca departments accounted for most of the affected civilian population.

Given the complexity of violence, the policy of “total peace” with the full implementation of the Final Agreement and the promotion of other dialogue efforts will play a fundamental role in improving communities’ living conditions.

The Secretary-General notes that given the complexity of ongoing violence, the Government’s “total peace” policy incorporates new approaches aimed at halting the suffering of communities, highlighting positive results in some of the most critical regions, such as Buenaventura. The Secretary-General describes the resumption of negotiations between the Government and the ELN as encouraging and reiterates his full support for this process through his Special Representative. The Secretary-General further emphasizes that “dialogue efforts, combined with the implementation of key provisions of the Peace Agreement, can significantly reduce violence.”

The Comprehensive System of Truth, Justice, Reparation and Non-Repetition is taking decisive steps placing victims at the center of its advances

The report also describes progress by the Comprehensive System of Truth, Justice, Reparation and Non-Repetition. In a step towards the issuance of restorative sentences, the Special Jurisdiction for Peace (SJP) recently presented concluding resolutions within cases 01 and 03 which determined that seven former FARC-EP commanders, 22 members of the army and one civilian are eligible for the SJP to impose restorative sentences. For the Secretary-General, this is proof that the SJP “is working decisively to bring justice for grave crimes committed during the conflict”.

The report highlights that, since its creation, the Unit for the Search for Persons Deemed as Missing has recovered 611 bodies and handed over 167 bodies to their families. For its part, the Committee to follow-up on the recommendations of the Truth Commission has continued to raise awareness and foster ownership of the recommendations among State institutions and civil society. According to the Secretary-General, the mechanisms put in place to ensure that victims are at the center of the process are essential to meet the objectives of Colombia’s cutting-edge transitional justice system.

For the Secretary-General, Colombia’s peace process is in a dynamic new phase that deserves strong international support.

“The United Nations is honoured to continue to work alongside Colombians in this encouraging moment of opportunity for consolidating peace.”