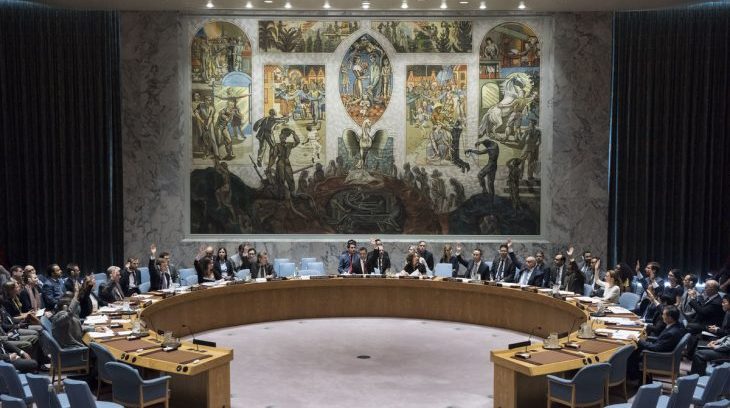 On 11 January, the Head of the United Nations Verification Mission in Colombia, Carlos Ruiz Massieu gave a statement on the implementation of the 2016 peace agreement in a UN Security Council meeting on Colombia. British government minister David Rutley MP also made a statement in response. You can read Ruiz Massieu and Rutley’s statements below in full.

Briefing by Carlos Ruiz Massieu, SRSG and Head of the UN Verification Mission in Colombia

It is a pleasure to address the Council at the beginning of this important year for peace in Colombia.

It is also a very particular honor, a special honor, to be here in the presence of Vice-President Francia Márquez, the Vice-President today but a historic peacebuilder in Colombia. An equally special welcome to Minister of Foreign Affairs Álvaro Leyva, who is also a historic person for peace in the country. I take the opportunity to thank them both for the trust as well as the support extended by the Government of Colombia to the UN Verification Mission and to the UN System in general. I would like to express once more my solidarity and reiterate my absolute condemnation of the attempted attack against the Vice President reported yesterday.

I am also pleased to have in today’s session the participation of Armando Wouriyu Valbuena, a prominent indigenous leader and Secretary of the High-Level Forum of Ethnic Peoples created by the Peace Agreement, who works day-to-day to advance the rights of ethnic communities across the country.

The developments described in the most recent report of the Secretary-General on Colombia speak of the potential of the year ahead for the consolidation of peace in Colombia. I am confident that, with the commitment of the parties, 2023 can bring decisive progress to deliver much needed security and development opportunities for communities in conflict-affected regions.

Just a week ago, President Petro and Vice-President Márquez traveled to Chocó, one of the most neglected regions of the country, to sign the law which enacted the Ministry of Equality. This is an exciting development for Colombia. This new institution, under the leadership of the Vice-President, seeks to address deep inequalities affecting especially women, Indigenous and Afro-Colombian Peoples.

It can be certainly an important instrument for advancing the goals of the peace agreement by helping to bridge disparities within Colombian society.

In his report, the Secretary-General welcomed the Government’s recent actions to move forward in some of the areas of the Agreement with the greatest transformative potential. I echo his praise for steps taken in the last few months regarding the comprehensive rural reform, such as the agreement on purchase of land and the increase in the budgets for agriculture.

Further momentum in rural reform issues was seen in the convening by the authorities of the first National Convention of Peasants, which I attended last December. In that Convention, representatives of peasant communities, shared testimonies and came forward with many proposals for deepening the implementation of elements of the Agreement’s comprehensive rural reform, reaffirming once again their key role in peacebuilding.

Rural reform is, now and finally, clearly moving to the center of efforts to build a more peaceful and prosperous Colombia.

As the Secretary-General has reiterated, constructive dialogue between the parties, as well as between the Government and civil society, is of the essence, and I am very encouraged by the positive environment that has characterized the past few months within the Commission for the Follow-Up, Promotion and Verification of the Implementation of the Final Agreement, as well as in other fora created by the Agreement, and I trust that this spirit will shortly translate into joint actions to overcome pressing challenges so as to move forward decisively.

This year is also key to advance outstanding legislation to implement the Peace Agreement. Victims’ representatives in Congress, as well as members of political parties from across the spectrum, will all have a fundamental role to play.

Mr. President and Distinguished of the Council,

The success of the reintegration process is essential to building a stable and lasting peace, as foreseen by the Government as well as the former FARC-EP in the Final Peace Agreement. In this sense, I welcome the recent appointment of Alejandra Miller, a former Truth Commissioner and a women’s rights advocate, as new director of the Reintegration Agency, which is a key entity in ensuring this success. Her emphasis in integrating the gender and ethnic approaches into the reintegration process is very encouraging.

Likewise, the recent extension until June 30 of the basic allowance, which guarantees access for thousands of former combatants to a basic monthly income, is a very positive step, while the parties continue working jointly on medium and long-term measures to ensure the sustainability of reintegration. To this end, it remains critical to guarantee the necessary resources to support the thousands of men and women former combatants who remain committed to their transition into civilian life despite enormous challenges and threats.

President and Distinguished Members of the Council,

It is regrettable that, over six years since the signing of the Agreement, violence against communities, social leaders and former FARC-EP members continues. Numerous acts of violence have taken place in the last few weeks, especially in areas prioritized for the implementation of the Agreement.

Of special concern is the continuity of the violence against Indigenous and Afro-Colombian leaders and communities, such as the Awá People and the Alto Mira y Frontera Community Council, both in Nariño department, where the implementation of ethnic provisions of the Agreement is imperative.

As the Government takes bold steps to reduce violence in the framework of its “total peace” policy and implements a new human security approach, the coordinated implementation of the Agreement’s provisions on security guarantees is also necessary. I trust that the recent steps taken by the National Commission on Security Guarantees will allow progress towards this objective.

President, Members of the Council,

Progress by the Comprehensive System for Truth, Justice, Reparation and Non-Repetition, one of the core axes of the Agreement and one of its most innovative aspects, is encouraging.

The issuance by the Special Jurisdiction for Peace (SJP) of its first conclusive resolutions is a decisive step towards the first sentences, which could be issued this year, and as pointed out by the Secretary-General, the recommendations included in these resolutions, built based on a dialogue process with the participation of victims and individuals under the SJP’s jurisdiction, clearly illustrate that peace and justice can and must reinforce one another.

The Mission will continue supporting the SJP and Government entities as they prepare to ensure the conditions for the implementation of these sentences.

While pressing forward with the implementation of the Final Peace Agreement, Government engagement with illegal armed actors has continued in the framework of the “total peace” policy. Last month the Government and the National Liberation Army (ELN) concluded the first round of peace dialogues in Venezuela amid a constructive environment. They plan to hold a new round in Mexico in the coming weeks. The parties’ decision to reinitiate discussions is widely supported in Colombian society, and is valued especially by communities affected by the conflict in several regions.

At the request of the two parties, the Secretary-General has agreed to permanently accompany their dialogue process though my presence at the talks. I have been carrying out that role as part of a supporting group that includes the guarantor and accompanying countries, and the Catholic Church. The parties have also decided to share with the Security Council documents agreed at the negotiating table. I will ensure that the first of such documents, focused on the rules and architecture of the negotiating process, reaches the Council through the Secretariat.

Mr. President and Members of the Council,

The New Year began with a hopeful announcement by the President of six-month ceasefires with several illegal armed actors operating in various areas across the country. The Secretary-General has welcomed this announcement, and if carefully designed and carried out with commitment, de-escalation measures agreed with armed groups can help to significantly reduce violence and suffering of conflict-affected communities while building trust in ongoing dialogues.

There is a fundamental reality that has to be acknowledged. The lasting success of the Colombian Peace Agreement, which we all wish to see, is contingent on the ability of the Colombian authorities to address the persistent violence that poses its greatest threat. The Government is making an admirable effort to do so, in part, through differentiated dialogues with the illegal armed groups aimed at ending the violence.

If these dialogues are successful, this would greatly contribute to generate the security conditions necessary for the different provisions of the Final Agreement to materialize. The effective implementation of the Agreement in itself would bring about the transformations required for lasting peace to take root.

Mr. President and Members of the Council,

The Council’s decision today to authorize the expansion of the Mission’s mandate to include the Agreement’s comprehensive rural reform and the ethnic chapter in its verification tasks will enable the Mission to increase its contribution to peace in Colombia. I am very grateful for your trust and that of the parties.

There are plentiful of opportunities ahead for peacebuilding in Colombia. The role of the United Nations and the solid support of this Council remain as important as ever. I take this opportunity to express my gratitude to the hundreds of men and women within the Mission and the Country Team whose day-to-day work is a clear reflection of this commitment.

The UK Government remains committed to supporting the consolidation of peace in Colombia through the full implementation of the peace agreement with the FARC.

We welcome the Colombian Government’s commitment to implement the 2016 agreement as a fundamental part of its work to secure a broad and lasting peace.

We have been pleased to see renewed momentum over the past three months, including the government purchase of 3 million hectares from the Cattle Ranchers Association; the reactivation of the National Reintegration Council, and the concluding resolutions passed by the Special Jurisdiction for Peace.

We welcome today’s Council’s decision to expand the mandate of the UN Verification Mission, to cover progress on the rural reform and ethnic chapters of the peace agreement. It is clear that progress on these two chapters is vital.

As the Secretary-General set out in his recent report, violence remains the greatest threat to the consolidation of peace in Colombia.

We welcome the decisive action taken by the Government to strengthen public security forces in new reintegration areas, and the Vice-President’s announcement of increased funding to safeguard women leaders and human rights defenders.

We share the Government’s concern about attacks on human rights defenders, environmental advocates, and other civil society activists. We are committed to tackling these threats together in order to secure a better future for the Colombian people. We also welcome the continued close cooperation between Colombia and its international partners on tackling drugs and organised crime.

In this context, we welcome Government-led efforts to secure a ceasefire, in order to reduce insecurity and alleviate the suffering of conflict-affected populations.

We also welcome Special Representative Massieu’s support for the Government’s ongoing dialogue with the ELN.

President, Colombia remains an example to the world of the transformative potential of dialogue and leadership. I’ve seen that commitment first-hand on a recent visit.

As the Colombian people seek to overcome the remaining barriers to a broad and lasting peace, the UK is proud to stand with them.