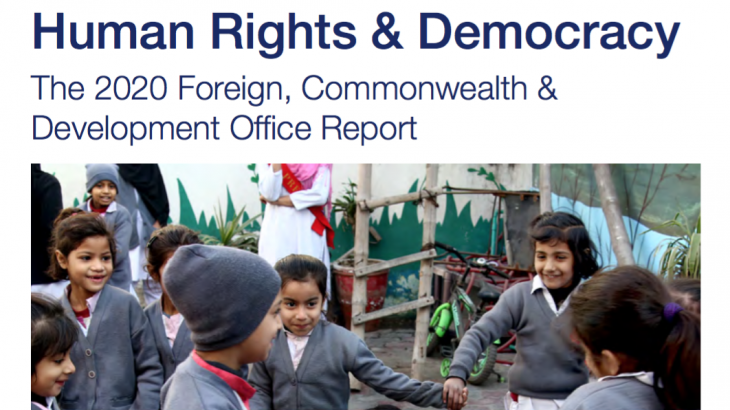 The British government’s Foreign, Commonwealth & Development Office has released its 2020 report on human rights and democracy around the world. The UK has designated Colombia as a ‘human rights priority country’, while, as penholder on Colombia at the United Nations Security Council, it works closely on issues relating to the country. It has also contributed funding to Colombia’s peace process.

In the report’s section on Colombia, the FCDO expresses concern over the killings of social leaders and former combatants in the peace process, while reiterating its position that full implementation of the 2016 peace agreement is crucial to improving security. It also welcomed investigations into police officers accused of killing protesters in Bogota in September 2020.

Below is the report’s section on Colombia. You can download the full report at the bottom of the article.

While significant progress had been made since the signature of Colombia’s landmark Peace Agreement in 2016, considerable human rights concerns remained, particularly around the high number of killings of human rights defenders (HRDs) and continued violence in some areas. The UN Secretary-General’s Special Representative, Carlos Ruiz Massieu, identified these concerns as the biggest threat posed to the success of the Peace Agreement.

Although there was a reduction of the national homicide rate (from 25 to 23.7 per 100,000 persons in 2020, compared to 2019), killings increased in certain areas of the country throughout the year, largely where the Peace Agreement’s crop substitution programme and the PDETs (Territorially Focused Development Plans) were being implemented.

Lockdown measures and travel restrictions introduced to combat COVID-19 increased the risk to HRDs from illegal armed groups, since they were more easily targeted, and often killed, near their homes. Community and indigenous leaders were most affected. The Office of the UN High Commissioner for Human Rights (OHCHR) confirmed that at least 133 HRDs had been killed in 2020, an increase from 108 in 2019.

The Colombian Government reiterated its commitment to protecting HRDs, and there were some improvements in the situation. The Attorney General’s Office increased convictions of perpetrators, including of those ordering the killings. The UK contributed to the protection of Colombian HRDs in many ways. For example, we supported the special unit at the Attorney General’s Office in charge of investigating attacks against HRDs; helped boost the capacity of the Ombudsman’s Office early warning system to act against

threats; contributed to the funding of a study to identify patterns and causes of attacks against HRDs; and supported the system set up to establish protection mechanisms. In 2021, the UK will support a new joint programme, funded through the UN Trust Fund, working across the Colombian Government to establish safe spaces for social leaders and former FARC fighters.

The full implementation of the Peace Agreement continued to be crucial to improve the security situation for former FARC combatants, 248 of whom were killed from 2016 to 2020, with 73 of these killings taking place in 2020. The Government expressed its solidarity, and committed to protecting them and their families, but not enough was done to provide security in conflict-affected areas.

Colombia’s lengthy lockdown because of COVID-19 allowed illegal armed groups to expand and exert more control over certain communities. As well as threats and killings, armed groups carried out forced displacements and vehicle incinerations as punishment for not abiding by their movement restrictions. In addition, they blocked land and waterways, and disrupted the arrival of food and medical supplies. Although the national lockdown was lifted on 1 September, armed groups continued their own lockdowns in some regions.

Criminal groups settling scores or vying for control of territory led to the killing of at least 292 people, with perpetrators ranging from narco-trafficking organisations to armed groups and dissidents who rejected the peace process. The Colombian Defence Ministry created a Special Unit to identify, locate and prosecute the perpetrators.

Colombia fell one place in the Reporters without Borders Media Freedom Index, ranking 130 out of 180 countries. Violence and fear leading to self-censorship were the most common threats. The UK continued to defend media freedom through supporting projects to strengthen and facilitate the creation of local media outlets in municipalities lacking them.

The Preventing Sexual Violence in Conflict Initiative (PSVI) remained one of the UK’s top priorities. We engaged in high-level conversations to address sexual violence in conflict, and funded a project to produce informative and educational pieces to tackle sexual and gender-based violence and mental health in indigenous communities.

Violent protests broke out in September after a video went viral on social media, showing Bogotá police repeatedly shocking a man with a taser during an arrest; he later died in hospital. 13 protesters died in the demonstrations that followed, and over 400 people were injured, including over 100 police officers. There were reports of some police firing indiscriminately into crowds gathered outside police stations, a number of which were burned down during the protests. The Government condemned the excessive use of force by some police, suspended the officers involved, and launched an investigation. The UK welcomed this investigation and affirmed its support for Colombians’ right to protest peacefully.

In addition to its programme activities, the UK continued to raise concerns about human rights both directly with the Government and in multilateral fora such as the UN Security Council. In October, Lord Tariq Ahmad of Wimbledon, the Minister responsible for human rights, held a virtual visit to Colombia. He met HRDs, survivors of sexual violence, journalists, and a range of government officials including the Deputy Attorney General, Martha Mancera, to discuss how the UK could provide further support. In 2021, we plan to build on these suggestions and seek to provide targeted UK expertise and assistance where it can make the most impact.