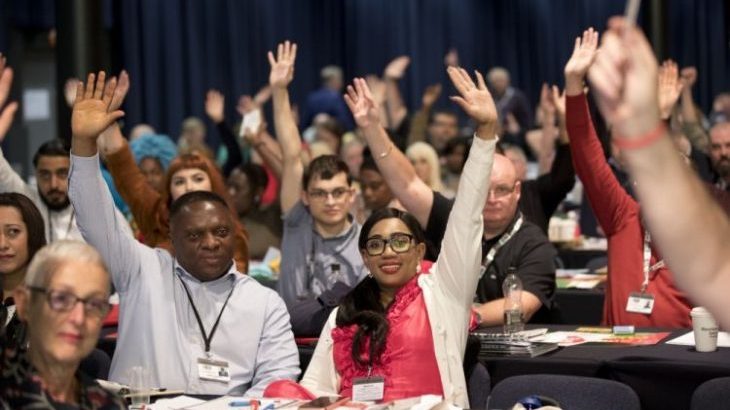 Britain’s Trades Union Congress, which is currently holding its annual congress (10-13 September), has unanimously passed a motion in support of Colombian trade unionists, protesters and activists which called on the British government ‘to review security and trade partnerships with Colombia in response to human rights abuses’.

The motion also expressed support for the 2016 peace agreement, which continues to face many challenges, as well as for all member unions to support Justice for Colombia’s campaigning.

The motion was moved by the POA prison officers union and seconded by the BFAWU bakers union.

Read the full motion below.

Congress pays tribute to the Colombian people for their commitment to human rights, peace and social justice through trade union-led, national strike protests that have mobilised millions of people.

Congress condemns the horrific abuses against protesters committed by security forces under President Ivan Duque. Between 28 April and 30 June, human rights groups documented the police having committed over 4,000 acts of violence, 44 killings of protesters, 82 permanent eye injuries, 28 cases of sexual violence and over 2,000 arbitrary arrests.

Colombian government ministers made dangerous and unfounded insinuations linking protesters to criminal organisations and legitimising police violence against them.

Congress is concerned that Britain’s free trade agreement with Colombia and its training of Colombian security forces is giving the green light to state violence, while impunity still surrounds most killings of trade unionists and social activists.

i. call on the British government to review security and trade partnerships with Colombia in response to human rights abuses

ii. pressure the British government to demand accountability for perpetrators of state violence and full investigations into killings of trade unionists and social activists

iii. lobby the British government to increase its efforts to support full implementation of the 2016 peace agreement

iv. support the vital work of Justice for Colombia by affiliating at national, regional and branch levels.