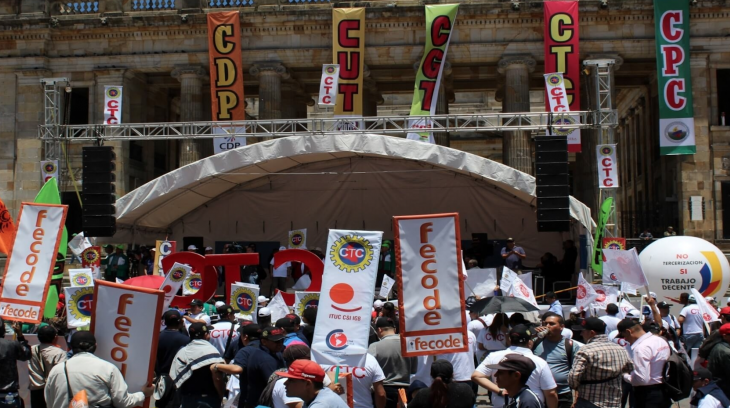 Colombia’s largest trade union federations, the CUT and the CGT, have called largescale mobilisations across Colombia in a show of support for the government of Gustavo Petro, who was elected in June as Colombia’s first ever progressive president. The rallies are being held to mark the government’s first 100 days in office and in response to recent right-wing anti-government protests, with tens of thousands of trade unionists, workers and government supporters expected to take to the streets in towns and cities on Tuesday 15 November.

Among the government policies that trade unions and social organisations have said they are supporting are progressive tax reforms which aim to tackle inequality, government land purchases to accelerate land distribution programmes, implementation of the 2016 peace agreement, the reopening of the border with neighbouring Venezuela and the landmark Paz Total (Total Peace) initiative which promotes dialogue with armed groups to reduce violent conflict.

The mobilisations represent a continuation of the support during election campaigning from trade unions and social organisations for the Historic Pact coalition of Petro and vice-president Francia Márquez. Since its election, the government has made determined efforts to fulfil its election promises. Its commitment to trade unions was reflected in the appointment of trade unionists Gloria Ramírez as Minister of Labour and Edwin Palma as Vice-Minister of Labour.