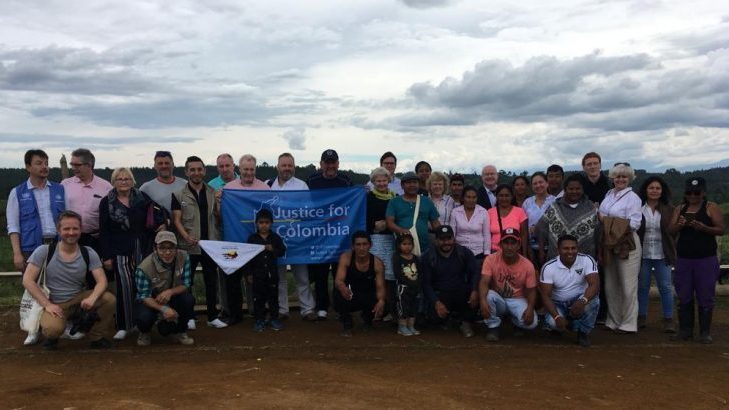 The Sinn Fein senator Paul Gavan was a delegate on the Justice for Colombia Peace Monitor which visited Colombia in late-May. Paul wrote this article for the Irish trade union Mandate’s magazine, Shopfloor. We republish it here, with permission.

In 2016 a Latin American country gave the world great news. The Colombian state and the western hemisphere’s oldest guerrilla movement, the FARC, signed an agreement to end half a century of armed conflict.

Today, the Colombian Peace Process is in crisis. It’s not hard to see why; 116 social, human rights and trade union leaders were assassinated in 2018, and 51 more so far this year.

Three FARC members were also murdered in June taking to 135 the number of former guerrillas killed since the Colombian peace agreement was signed in November 2016.

It’s hard to sustain a peace process when one side sees its leaders being systematically assassinated. It’s harder still after the election last year of a far‐right government under President Ivan Duque that has been a constant critic of the peace process and appears at best indifferent and at worst complicit in the slaughter of civic leaders.

President Duque’s support for the appointment of an army general, Nicacio Martinez, accused of serious human rights abuses, as the new head of the Colombian military is just one example of worrying policy choices under his administration.

I spent the last week in May visiting Colombiaas a member of a Justice for Colombia peace monitor delegation of trade unionists and politicians from Ireland and Britain.

At a meeting with opposition politicians, in one of the saddest statements I have ever heard, Aida Avella, a member of parliament for the Patriotic Union Party, told me: “There aren’t so many trade unionists killed lately, but then there aren’t so many of us left.”

The peace agreement promised an end to conflict, disarmament, justice for victims, comprehensive rural development, and political participation for all. FARC handed over 100% of their weapons to a United Nations mission in September 2017, and agreed to be demobilised into reintegration zones across the state. It has transformed into a political party and retained the name FARC.

However, nearly three years on the key components of the agreement remain unfulfilled. Instead of a bright new future based on inclusion, former combatants and social and trade union leaders face ever greater threats to their lives and their communities from right‐wing paramilitary groups, sometimes in collusion with state police and military, and always with impunity.

The issue of rural development is one key component of the peace agreement. As one former FARC combatant explained to me: “At heart we are farmers; if we don’t plant crops, we don’t have a future.”

As part of the peace agreement a land fund of three million hectares was to be given to peasant farmers, with land titles covering another seven million hectares to be formally regularised for the first time. To date this promise of rural reform remains unfulfilled.

At the same time thousands of ex‐FARC combatants are stranded across 26 specially created demobilisation zones as the lack of rural development has made it impossible to build a viable economic future for their communities.

I visited one of these zones in the North East of Colombia. Tierra Grata is located high up in the hills of the municipality of La Paz in the Department of Cesar. The people I met there, ex‐FARC combatants and their families, were struggling against the odds to build a future for their community.

There was much to admire about this community, especially the leading role played by women, and their adherence to democratic principles at community level. They had built basic homes, developed community facilities,and had managed to acquire a small amount of land for growing crops.

However they still depended on water being delivered each day up a very challenging dirt road and depended on a rudimentary supply of electricity through an on‐site generator.

They were anxious to develop eco‐tourism as a source of revenue but were mired in poverty. It was clear that the state support that was promised in the peace deal had not been delivered. One community leader explained to us: “This situation sometimes takes away our hope. If re‐incorporation is a failure, then peace has failed and this is what is happening.”

Perhaps the most moving meeting was with the community leaders of Cajibio, a town of around 40,000 in north Cauca. It was the pictures that will stay with me. Pictures of men, most of them young, pinned to one wall of the community centre in which we met.

All of them community or trade union leaders. Many of them members of the FENSUAGRO agricultural trade union. All of them dead – murdered by paramilitaries who appear to be able to act with impunity.

These paramilitaries are the dark underbelly of tooth‐and‐claw capitalism that holds sway in Colombia, acting on behalf of big corporations and big landowners that dominate economic wealth in this unfortunate country.

One week after my return home I read of yet another death from that same community – this time of a 16‐year‐old youth member of the same union, beaten to death by police last month. Startling new figures from the International Trade Union Confederation last month showed that almost two‐thirds of global murders of trade unionists in 2018 occurred in Colombia.

In addition to 34 murders in Colombia, the ITUC found 10 cases of attempted murder and 172 cases of threats to life in the country. This is why Colombia is the most dangerous country in the world in which to be a member of a trade union. On the last day of our visit we met with high‐ranking government ministers and officials. The fact that they would meet with representatives from Justice For Colombia was significant, and it was encouraging to hear them express support for the goals of the peace process.

Regrettably though, much of the language used was not at all in keeping with these aims, and there was no credible commitment offered to tackle the ongoing slaughter of opposition activists and former combatants.

So what is to be done? The message from former combatants, trade union and social leaders was clear. The Colombian government must not be allowed to turn their backs on the promise of the peace process.

There must be unprecedented pressure brought to bear on the administration, particularly with regard to the Human Rights Commitments attached to the recent EU‐Colombian trade deal.

The peace agreement still has the potential to deliver. If the Colombian government continues to fail to honour the agreement, it must be held accountable in a meaningful way – both at United Nations level, and in terms of international trade.

Above all the trade union movement must continue to be at the heart of the international campaign for Justice for the Colombian people.