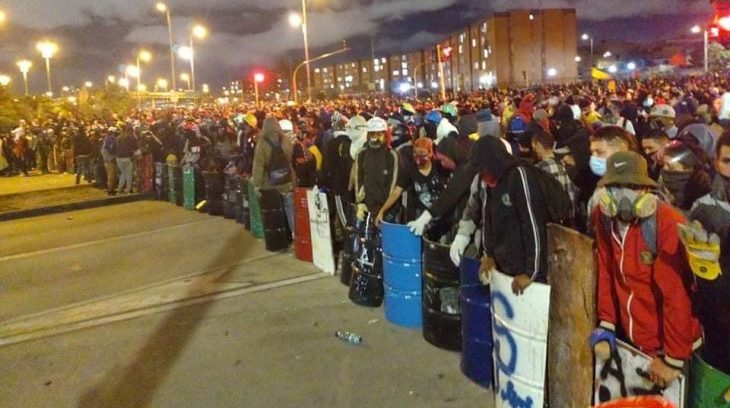 The mobilisations drew unprecedented numbers of people onto the streets of towns and cities, with security forces under the then-government of President Iván Duque launching a brutal crackdown in which scores of people were killed, sexually assaulted or maimed. Thousands of others were subject to physical attacks and illegal arrests. At least 168 young people have faced criminal charges over their alleged participation in the protests.

During a public event in Pasto, a city in southern Colombia, on Saturday 3 December, Petro announced that young members of the Primera Línea (Front Line) – the widely-used term for those who led popular resistance to state violence – should be recognised ‘Agents of Peace’ to to bring about their freedom. The frontline resistance saw large numbers of youths bearing shields made from dustbins face off against the highly militarised hardware of Colombian riot police.

Petro called for the release of young protesters during campaigning for the presidential election. Following his election on 19 June, he initiated his victory speech by imploring the Attorney General to ‘liberate our youth.’

An unconfirmed number of young people remain incarcerated since the protests in April and May 2021, the largest seen in Colombia for decades. Last month, the Attorney General reported 33 cases against alleged members of the Primera Línea, as well as charges against 168 people and another 118 accusations. Interior Minister Alfonso Prada recently indicated that 230 cases had been identified. Human rights groups and families of the detainees have repeatedly campaigned for charges to be dropped.

By comparison, there has been virtual impunity for police officers suspected of committing appalling abuses including murder, rape and torture. The United Nations, the Inter-American Commission on Human Rights and Amnesty International are among the international organisations to have condemned the highly disproportionate use of force enacted by security force against unarmed protesters.

According to Minister Prada, the release of young protesters is not an amnesty or pardon, but rather an act that will ‘utilise in the best way youth leaders who, in the midst of the protest, behaved in ways that were censored by the justice system.’ As Agents of Peace, they could be deployed to work in the development of regional or youth forums on peace and other peacebuilding initiatives.

The proposals to create Agents of Peace faces right-wing opposition in congress but families of the young people still behind bars will hope that Petro’s attempts to fulfil one of his campaign pledges bears fruit.