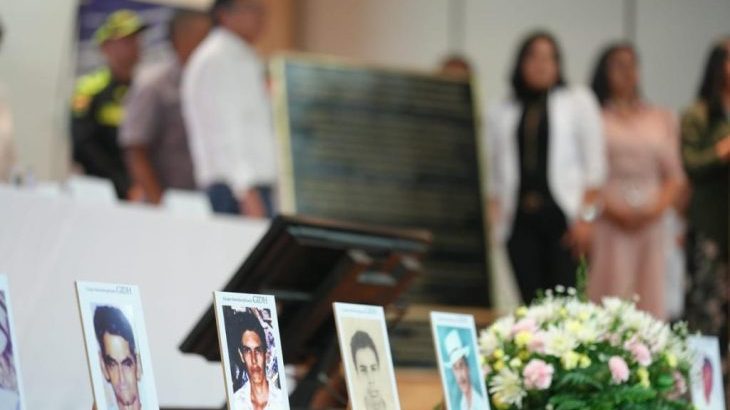 Colombian president Gustavo Petro has recognised the state’s responsibility for two paramilitary massacres committed in 1996 and 1997 and apologised to families of the victims. On Wednesday 30 November in Medellin, Petro took part in a ceremony in which he asked for forgiveness on behalf of the state for the massacres at La Granja and El Aro, villages in the department of Antioquia. The meeting was attended by survivors, relatives of the victims and human rights defenders.

The massacre at El Aro is among the most extreme examples of paramilitary violence committed during Colombia’s armed conflict. On 22 October 1997, members of the Peasant Self-Defence Forces of Córdoba and Urabá (ACCU), a far-right organisation connected to military officials and politicians, entered the community of El Aro in Ituango, Antioquia. They tortured and killed 17 people, mainly peasant farmers, after accusing them of collaborating with the FARC, Colombia’s largest guerrilla movement at the time. A further 1,472 people were forcibly displaced by the massacre, as paramilitaries burnt most of the community’s homes and stole livestock.

The previous year, the same paramilitary group had killed five people, after also accusing them of guerrilla collaboration, in front of their families and neighbours in nearby La Granja.

Petro’s act of recognition follows a 2006 ruling by the Inter-American Court of Human Rights that the state was behind the massacres, carried out by paramilitaries with army-collusion. The IACHR said that in addition to public acknowledgement of its role in the atrocities, the state should provide financial reparations and psychological support for survivors, install a commemorative plaque and facilitate the safe return of families displaced by the events. Relatives said it had taken 16 years for a president to demonstrate the intent to address the IACHR’s findings.

‘For us, this is of great importance to dignify the memory of those murdered 25 years ago. The pain never goes away, it fades over the years, but it’s there. Beyond this act of forgiveness, it needs to be remembered that there has been no progress in the territory and there must be comprehensive reparation,’ said Patricia Areiza, the daughter of one victim.

‘There are three points that are expected to be fulfilled after this act of recognition: the first is free healthcare, the second is justice and the third is the socioeconomic stabilisation of the displaced. We are no longer talking about return conditions because there are people who no longer want to return to El Aro,’ said María Victoria Fallón of the Interdisciplinary Group of Human Rights, which supports families of the victims.

The massacre at El Aro has been linked to the alleged involvement of the then-governor of Antioquia, Álvaro Uribe, who went on to serve as President of Colombia from 2002 to 2010. The Supreme Court and the Superior Tribunal of Medellin have previously referred to Uribe’s possible collusion with paramilitaries but there has never been a full investigation. Paramilitary commander Salvatore Mancuso, who in 2007 was jailed for 40 years over the massacre and extradited to the United States the following year, has previously accused Uribe’s former government secretary Pedro Juan Moreno of knowing of the paramilitaries’ intention to enter El Aro. Mancuso also said that helicopters belonging to the military and to the Antioquia regional government flew overhead during the assault.