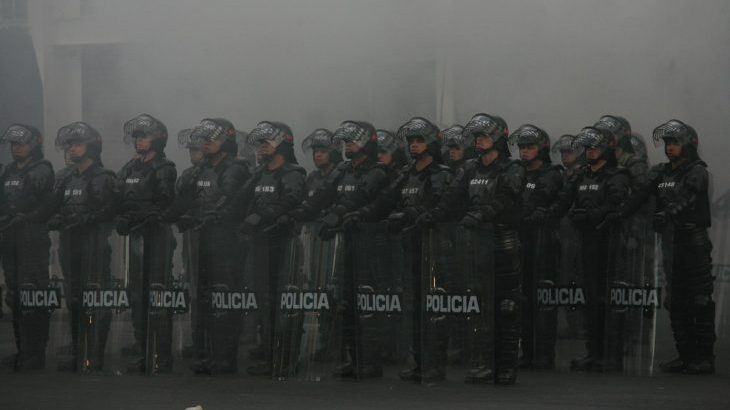 A 31-year-old man died yesterday days after police shot him in the head with a stun grenade during repression of protests in the town of Bolivar in Colombia’s northeast Santander region. Michelsen Varga spent five days in intensive care following the attack on 13 November but finally succumbed to his injuries. The agents responsible belonged to the notorious Mobile Anti-Disturbance Squadron (ESMAD), which has a long record of killings and abuses committed against unarmed protesters.

The protests were held in opposition to oil drilling carried out in the zone by Colombia’s national oil company, Ecopetrol, which local communities say has caused extensive environmental damage. For around 50 days, they have blocked a main road into the area. According to the USO oil workers union, last Saturday ESMAD agents attacked the protesters as they celebrated a national holiday. Reports said that children were dangerously exposed to teargas.

Michelsen’s death is the latest incident of violence conducted by the ESMAD. High-profile cases include the killings of 18-year-old Dilan Cruz in Bogota in November 2019 and Jhonny Silva Arangueren in Cali in 2005. ESMAD agents were heavily implicated in the widespread police violence against protesters in April and May this year which left at least 43 people dead, over a thousand injured and more than 80 with permanent eye injuries caused by police projectiles.

The ESMAD’s inability to act with restraint has led to calls from protest organisers for it to be abolished. In Congress, a number of opposition politicians have submitted proposals to disband the ESMAD, citing its appalling record of violence towards civilians. However, ESMAD violence has not been addressed by the government and it continues to confront protesters through highly repressive tactics.