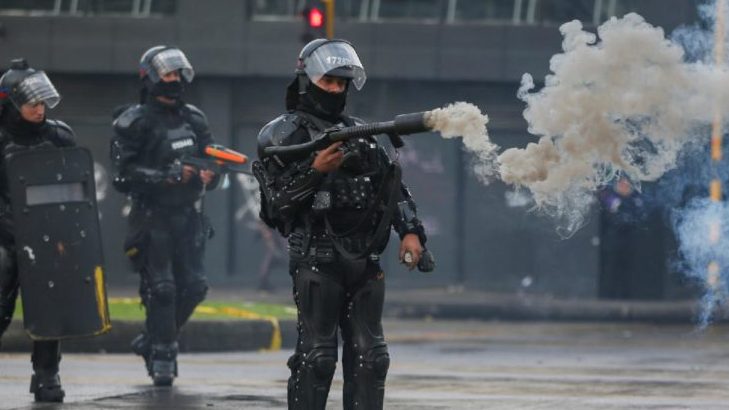 The proposals relate to the notorious Mobile Anti-Disturbance Squadron, or ESMAD, which is frequently deployed in situations of peaceful protest and civil unrest. ESMAD agents are behind some of the worst excesses of police violence in recent years, including the killing of 18-year-old Dilan Cruz as he fled their attacks on protesters in November 2019, shortly after National Strike protests were launched, and the 2005 killing of student Jhonny Silva Arangueren, who was shot in the head during protests at the Universidad del Valle in Cali.

Figures released by the Colombian human rights NGO Temblores in late 2019 showed at least 34 killings attributed to the ESMAD. Further killings have since been attributed to its brutal treatment of civilians, with the current figure standing at 61, along with multiple cases of torture, excessive force and abuse of power. In response to this appalling human rights record, National Strike organisers have located the ESMAD’s disbandment as a core demand of resolving the National Strike.

Now, in congress, the senators Iván Cepeda, Antonio Sanguino and Feliciano Valencia have advanced legislation to achieve this. They have also proposed to reform obligatory national service so that young people can perform public roles other than within the armed forces, while reducing the term of service from 18 months to one year. These roles could include working in social organisations that support conflict victims, promote peace-building in conflict-affected regions or strengthen the rights of rural communities.

Critics of the ESMAD have long accused its agents of taking a militaristic approach to situations of civilian mobilisation. They argue that security forces require urgent reform to prioritise dialogue over confrontation. Urgent reform of the ESMAD was also recommended in a report by the Office of the United Nations High Commissioner for Human Rights in February 2020.