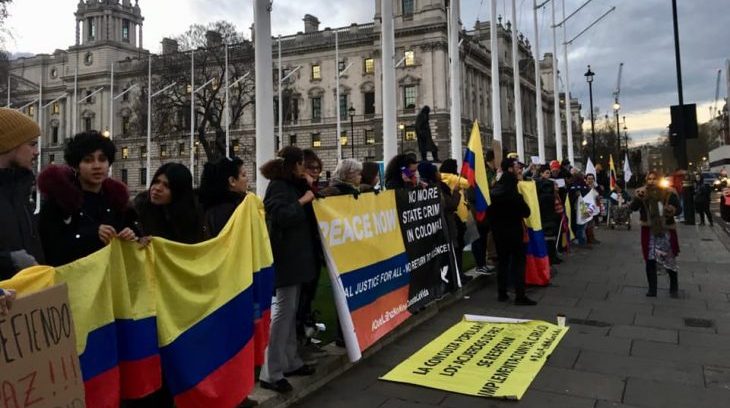 London’s Colombian community and supporters will hold a march and rally on Friday 26 July to protest the ongoing murders of social activists and FARC former guerrillas in Colombia. The event is organised by grassroots activists and organisations as part of an international day of solidarity to show support for peace and human rights. Marches will also be taking place across Colombia and in various other countries.

The international day of action comes as Colombia faces an escalating human rights crisis, with more than 700 social activists and FARC former guerrillas murdered since the peace agreement was signed in November 2016. The situtation has been exacerbated by slow or non-implementation of many core areas of the agreement.

In a statement, organisers said: ‘We call our compatriots to come out on the streets and squares on 26 July, in Colombia and abroad, to pay tribute to social leaders and to demand that these crimes be ended. We invite the mass media, political parties, churches, business associations, universities, social organisations and the general public to support and promote this initiative’.

The London action will meet at 4pm outside the BBC Centre in Portland Place (Oxford Circus tube). People will then march to Trafalgar Square and to Parliament Square, where from 6pm speakers will address the crisis outside the Houses of Parliament.

The event is open to all who support Colombia’s peace process and oppose violence against civil society.