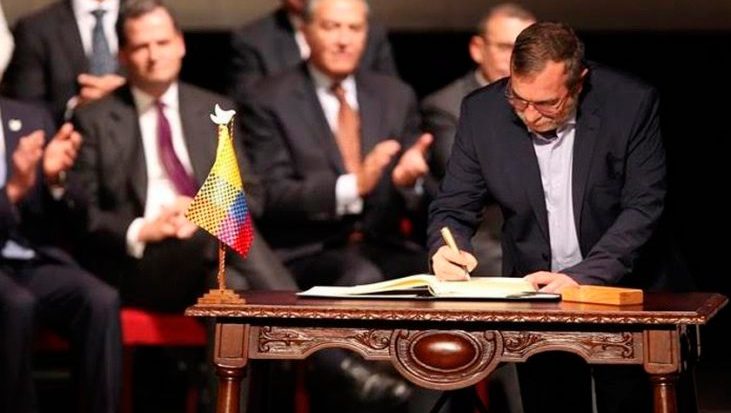 Following President Iván Duque’s objections to the a number of articles included in the Special Jurisdiction for Peace [JEP], the peace agreement’s transitional justice chapter, members of the negotiating teams as well as many other Colombian political and civil society figures, including former JFC director Mariela Kohon, signed the following letter addressed to the United Nations Secretary General, Antonio Guterres.

On 10 March, President Duque announced six objections to the JEP Statutory Law and the presentation of a reform to modify the legislative act which created it.

On 17 September 2016, the then-president of Colombia took to the United Nations two copies of the peace agreement signed by the Colombian State and the FARC-EP guerrilla ‘for the end of conflict and the construction of a stable and lasting peace’; one was given to UN Secretary-General Ban Ki-moon and the other to the United Nations Security Council, as agreed by the negotiating teams.

The fifth point of this agreement is devoted to the rights of victims and, in particular, to the Comprehensive System of Truth, Justice, Reparation and Non-Repetition, part of which is the Special Jurisdiction for Peace (JEP). The Colombian Congress incorporated the structural elements of the aforementioned System and the Special Jurisdiction for Peace into the Political Constitution, ratifying that this would be the institution in charge of investigating, judging and punishing the most serious and representative crimes that occurred during and in connection with the armed conflict.

On 24 January of this year, after examining the UN Verification Mission’ report on the peace process in Colombia, the members of the Security Council ‘reiterated the need to fully respect the Special Jurisdiction for Peace’s independence and autonomy and underscored the importance of providing political and practical support to enable it to achieve its objective of guaranteeing the rights of victims. They also expressed their support for the Commission for the Clarification of Truth, Coexistence and Non-Repetition, whose role is essential for the establishment of truth and reconciliation’ [1].

Similarly, the Prosecutor of the International Criminal Court (CPI) has supported the construction of peace between the State and the FARC-EP and has affirmed that the Final Agreement ‘recognises the central position of victims in the process and their legitimate aspirations for justice’. He also recalled that ‘these aspirations must be fully addressed through measures that ensure that those responsible for their suffering are genuinely placed at the disposal of justice’, and that ‘it is hoped that the Special Jurisdiction for Peace […] will carry out this function and focus on the main actors responsible for the most serious crimes committed during the armed conflict. This promise of accountability must become a reality to ensure that the people of Colombia receive full advantage of the benefits of peace’ [2].

In development of the preliminary examination carried out by the ICC Prosecutor’s office in relation to the Colombian situation, in various pronouncements it has fallen to the authorities of our country to advance the JEP’s functioning without delay or obstacles. In this way, Mr. James Stewart, deputy prosecutor of the ICC, while visiting Colombia on 1 November 2018, insisted on the need to allow ‘the JEP magistrates to do their work’ [3].

Despite the clarity of all these messages from influential institutions within the international community, the government of President Iván Duque Márquez persists in formulating new obstacles, or in attempting to revive debates already addressed in the legislative process of the laws that should regulate functioning of the newly-inaugurated transitional justice system. The most recent of these obstacles is the set of objections to the JEP Statutory Law that the President of the Republic has presented to Congress, despite the fact said law was already subject to control by the Constitutional Court. This is particularly worrisome as several of the objections raised are aimed at ignoring decisions taken on that law by the Constitutional Court last year. In other words, invoking the issue of objection due to inconvenience aims to ignore the decision by which the Court declared some of the legal norms as constitutional, with the condition they be interpreted as indicated in the sentence itself.

On 20 February, faced with the then-possibility that President Duque would object to the law, Deputy Attorney General Stewart emphasised ‘the importance of the JEP having a definitive legal framework’, and was emphatic in warning that ‘were this not the case, it could constitute a setback and we would have to consider its implications’ [4].

Unfortunately, the issue is not limited to the presidential objections to the JEP Statutory Law, which is already very serious. The Government and its caucus in Congress have announced the development of constitutional and legal reform projects to modify the new jurisdiction, which would not only mean a unilateral variation of the peace agreement, but ignore the constitutional norms that enshrine the fundamental principles that should govern the JEP’s functioning.

One of the areas in which adjustments are sought is the investigation and prosecution of members of the Security Forces. The Democratic Centre, a government party, previously said that members of the armed forces have no guarantees of impartiality in the JEP. Both the Peace Agreement and the Political Constitution of Colombia establish the unbreakable nature of the JEP, so that it represents the only jurisdiction to investigate, prosecute and punish both former guerrilla combatants and members of the Security Forces who committed crimes during the armed conflict. While it is true that the Constitution also says that treatment of members of the armed forces within the JEP must be symmetrical, balanced, equitable, simultaneous and differentiated in some aspects, the Constitutional Court has already specified that this does not mean an ad-hoc jurisdiction can be created which is exclusively responsible for investigating and judging them.

For the JEP to achieve its objective of holding legally accountable those responsible for crimes against humanity, war crimes and, in general, serious human rights violations, it must receive all the necessary institutional, financial and legal tools according to the size of your task. Otherwise, there are risks over the full functioning of its jurisdiction, while scenarios could arise in which the lack of legal tools favours impunity and limits the guarantee of victims’ rights. As an example of the risks involved in President Duque’s attitude, it is worth remembering that he is now objecting to that law, in which the JEP’s financial autonomy is guaranteed and whose budget has already been questioned by the government claiming it to be exaggeratedly high.

Those of us who subscribe to this communication are members of the delegations that, on behalf of the Colombian government and the FARC-EP, developed the Peace Agreement; congress members who form part of the peace commissions in the Senate of the Republic and the House of Representatives; former ministers and government officials; victims of the armed conflict, leaders of representative organisations and institutions in Colombian civil society, academics, opinion columnists and intellectuals, citizens who work for peace and national reconciliation. We express our deep concern at the attempts to seriously damage the Agreement’s implementation, the JEP’s structure and functioning, as well as the system designed to respect the rights of victims. We are aware of the significance that the success of the peace process and its model of transitional justice have for our country and the world. For all these reasons, we ask that the next report of the UN Verification Mission to the Security Council take into account the issues raised in this letter.

We present a copy of this letter to the members of the UN Security Council and to the Prosecutor of the International Criminal Court.

Former Peace Negotiator and former Chancellor of the Republic

Former Peace Negotiator and Senator of U Party