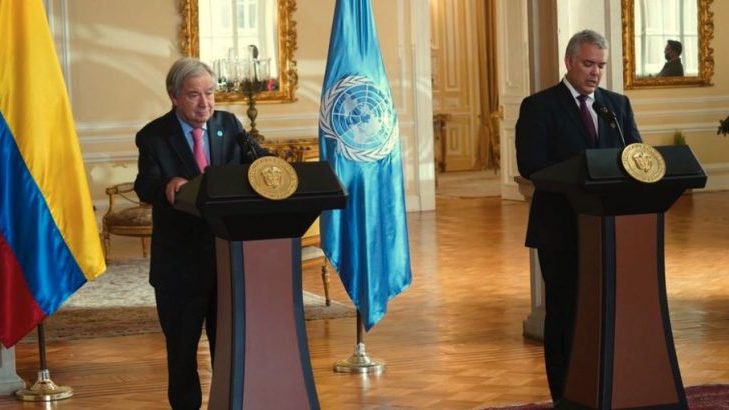 Justice for Colombia has written another article for British newspaper, The Morning Star, published to coincide with the ‘Adelante! Latin America Conference’ which took place in London on Saturday 4 December. You can read the article below.

Having marked the fifth anniversary of its historic peace agreement on November 24, Colombia now looks towards another landmark date: next May’s presidential election.

Whoever succeeds the current government of Ivan Duque will have an enormous bearing on the agreement between the then government of Juan Manuel Santos and the Revolutionary Armed Forces of Colombia (Farc). The signing raised optimism for the future of a country blighted by decades of political violence.

Duque’s 2018 election victory, however, provoked genuine fears for the peace process. His party, the hard-right Democratic Centre (CD), founded in 2013 by former president Alvaro Uribe, opposed negotiations with the Farc and subsequently orchestrated the successful No campaign in which Colombians narrowly rejected the agreement before it was ratified through congress. It was Uribe who selected Duque, a low-profile senator, as the CD’s candidate for the 2018 election.

Uribe’s 2002-2010 presidency was characterised by state abuses, including the army murders of over 6,400 mainly young civilians who were presented as guerillas killed in combat.

The “False Positives” scandal is one of the main investigations underway by the transitional justice court created in the peace agreement. Colombian victims’ groups have suggested that the uribista political movement’s opposition to the peace process seeks to prevent the truth about state atrocities, and the involvement of political and business elites, from coming to light.

With Duque’s presidency now drawing to a close (he is constitutionally prohibited from re-election), the peace process has endured. However, close to four years of government negligence have left it in a fragile state, as several of the agreement’s fundamental elements have barely advanced. At the current rate, implementation will take 26 years — far beyond the 15 specified in the agreement.

In recognition of dire social conditions in the countryside which propelled armed conflict, the agreement stipulates investment, land redistribution and infrastructural development in regions historically impacted by inequality and state abandonment. Yet most of these programmes have barely left the ground and many communities have yet to see any benefits.

Elsewhere, the peace agreement envisaged a new approach to tackling drugs production. Longstanding policies of militarisation and repression of rural regions targeted peasant farmers at the bottom of the production chain and exacerbated violent conflict.

Colombia’s embeddedness in global trade networks left peasant farmers unable to compete with multinational food imports. Coca-farming became a means of survival. But while rural communities should receive state support to voluntarily transition from illegal to legal crops, the government has persisted with army-led forced eradication.

In ensuing protests demanding the agreement be respected, soldiers have killed several people.

Meanwhile, former Farc combatants have remained committed to the peace process, as the United Nations repeatedly verifies. In 2017, the Farc reformed as a political party, known today as Comunes, and over 13,000 guerillas voluntarily laid down their weapons and started retraining in civilian vocations and establishing sustainable projects.

But, again, the government has not met its side of the bargain and many former combatants lack the necessary economic assistance. Earlier this week, the US government belatedly declassified the Farc as a terrorist organisation — over four years after it became a political party — which in theory should make it less difficult for former combatants to access support.

Most alarming is the human rights crisis which, since the agreement’s signing, has killed almost 300 former Farc combatants and over 1,000 social activists.

The country remains the world’s deadliest for trade unionists, with 22 killed between March 2020 and April 2021, and environmental defenders, with 65 murdered in 2020.

This latter statistic did not warrant much media attention at October’s Cop26 in Glasgow, where Duque cosied up to Boris Johnson, Prince Charles and Joe Biden amid gushing press articles over his government’s supposed “green” agenda.

Violence is not confined to the rural margins. Earlier this year, trade union-led protests demanded urgent action over inequality, the human rights crisis and protecting the peace process.

When Colombians head to the polls in May, they will vote to replace an administration which has presided over 130,000 deaths from Covid-19 and a five-million rise in unemployment figures. The current frontrunner appears to be the senator Gustavo Petro, who in 2018 became the first left-wing candidate to reach a presidential election’s second round.

Petro’s platform of social investment, environmental protection and implementation of the peace agreement has gained favour with millions of people sick of the brutal violence and inequality entrenched in the existing model.

However, Petro will face an onslaught from political opponents and the conservative-dominated media, which previously conspired to have him removed from office in 2012 when he was mayor of Bogota.

Under Duque, fears have grown over the strength of Colombia’s democratic processes.

The president appointed political allies to head state institutions which theoretically operate as a bulwark against excessive executive powers.

Alongside potential violence during campaigning — seven candidates were murdered during 2019’s regional elections — it is imperative that the international spotlight remains on Colombia.

Trade unions and political activists, through supporting Justice for Colombia, can lobby their political representatives to hold Colombia’s government to account.

International support helped Colombia reach the 2016 agreement. It is still needed today to ensure the will of the people is respected.