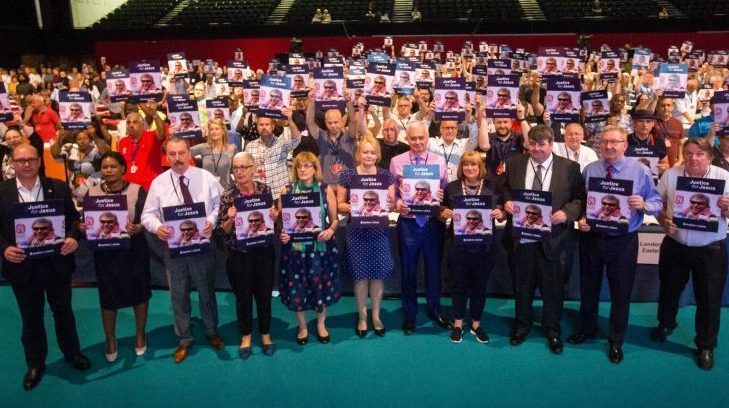 Justice for Colombia participated in Unite the Union’s 2018 Policy Conference in Brighton during 2-6 July, where there were a series of actions related to Colombia.

Unite passed an emergency motion regarding concern for the peace process following the recent election of Iván Duque to the Colombian presidency. Duque has expressed interest in changing or halting central elements of the peace agreement such as the transitional justice chapter, which could allow human rights abusers to evade justice. His government may also seek to impede the land reform and political participation elements of the deal.

The motion also expressed Unite’s alarm over the high levels of violence against social leaders in Colombia, with close to 100 killed so far in 2018, and over the ongoing detention of FARC congress member-elect and peace negotiator Jesús Santrich. The conference held a coordinated action of solidarity for Jesús Santrich in which Unite’s executive committee and delegates held up placards with his image and the hashtag #JusticeforJesus (click here to see pictures).

JFC also organised a fringe event to discuss the implications of Duque’s election for the peace process, trade unionism and human rights in Colombia. The FARC’s senator-elect Victoria Sandino, who headed the gender sub-commission during the 2012-2016 peace talks, spoke via video link on the importance of defending peace and human rights in the country. Other speakers were JFC director Mariela Kohon, Steve Cavalier of Thompson’s Solicitors and Unite international director Simon Dubbins.

JFC would like to thank Unite for its ongoing support for our work and the Jesús Santrich campaign, as well as everybody who spoke to us and participated in the actions around Colombia.