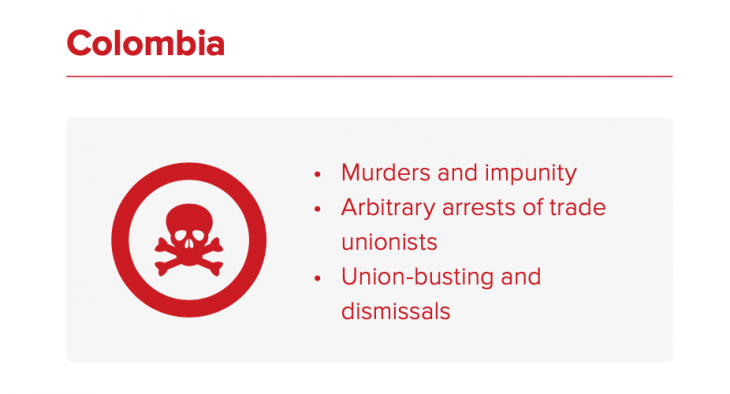 Colombia remains the world’s deadliest country for trade unionists in 2022, with at least 13 murdered between April 2021 and March 2022, according to the International Trade Union Confederation’s latest annual report into anti-worker violence and abuses around the world.

The ITUC Global Rights Index 2022 found that, amid a rise in the number of countries where workers faced barriers to joining trade unions, Colombia maintained its abysmal record on labour rights and conditions, again being named one of the ten worst countries in which to be a worker, alongside Bangladesh, Belarus, Brazil, Egypt, Eswatini, Guatemala, Myanmar, the Philippines and Turkey.

The report also found that workers were murdered in 13 countries and faced violence in 50. Overall, the number of countries where worker rights were violated was 148, compared with 139 in 2014.

In addition to the 13 trade unionists killed in Colombia, the ITUC documented six attempted murders, 99 death threats and eight arbitrary arrests in the country. Companies also fired trade unionists or did not renew their contracts in deliberate targeting. Aggression was exacerbated by government disregard for workers’ security, said the ITUC:

‘Most of these crimes remained unresolved, as the government failed to investigate the cases. Without any adequate protection provided to them, trade unionists and their families remained under constant threat to their lives.’

The ITUC report highlights the murder of teacher Clemito Rengifo Salazar of the Nariño Teachers’ Association (SIMANA) on 26 November 2021. Clemito was forcibly taken from the school where he worked, with students witnessing the abduction, and subsequently killed. It also detailed the case of Felipe Andrés Pérez, a member of the food industry union SINALTRAINAL, who was killed in Medellin after attending National Strike protests on 14 May 2021.

The report also criticised the German healthcare company Fresenius over death threats made against two union representatives involved in a dispute with its Colombian subsidiary, Quironsalud. Despite international calls for the company to condemn the threats, Fresenius remained silent.

Year after year, Colombia is the world’s most violent country for trade unionists. A study by the country’s ENS trade union organisation found that more than 3,200 were murdered from 1971 to 2018. As the latest ITUC findings clearly show, that violence continues today.