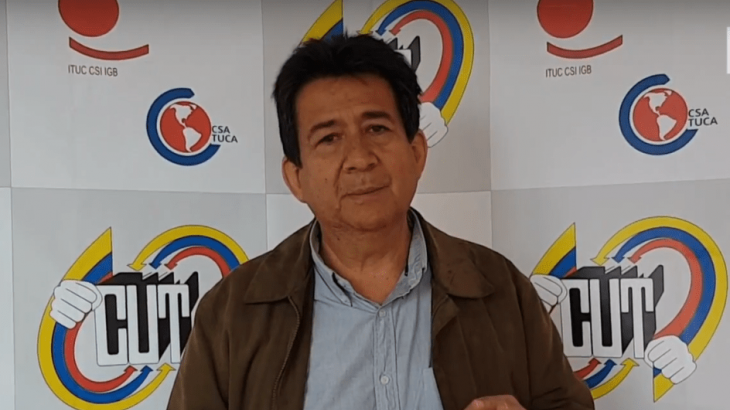 International trade union organisations have condemned threats made against Diogenes Orjuela, the president of Colombia’s main trade union confederation, CUT Colombia. On Wednesday 5 February, a letter was delivered to the CUT’s Bogota headquarters signed by a group identifying as the Black Eagles and threatening Mr Orjuela and other union officials.

In a statement, the CUT said it ‘categorically rejects this type of act, demands the National Government headed by president Iván Duque guarantees the life and security of comrade Diogenes Orjuela and the other comrades who appear in the threat, and that the relevant authorities realise a respective investigation to determine who is responsible.’

The International Trade Union Confederation (ITUC) said ‘we urge the government to take all conducive measures to restore trade union liberty in the country and we demand that it guarantees Mr Orjuela and other trade unionists’ physical integrity and security.’

Britain’s Trades Union Congress said ‘we condemn the death threats and call on the Colombian Government to guarantee the safety of social leaders and implement the peace agreement. ‘

The American Federation of Labor and Congress of Industrial Organizations, the largest trade union confederation in the United States, also denounced the threats, tweeting ‘as workers take to the streets to protest anti-worker reforms, unions worldwide stand in solidarity with our Colombian brothers and sisters.’

Colombia’s FECODE teachers’ association said ‘all our solidarity with Diogenes Orjuela over the threats against his life, which come from paramilitary structures.’ FECODE has also suffered violence and intimidation against its officials, including death threats sent to its entire executive committee last September.

Diogenes Orjuela has met previously with Justice for Colombia delegations and was an official international guest at the TUC’s national congress in September 2019. At a JFC event there, he spoke about the challenges and risks facing trade unionists, human rights activists and the peace process in Colombia. British trade unions represented at the event included Unite, the GMB, the POA and ASLEF.

According to the ITUC, violence against Colombian trade unionists has escalated, with murders more than doubling from 15 in 2017 to 34 the following year, which accounted for almost two-thirds of the global total of 53 in 2018. The United Nations has repeatedly said that full implementation of the peace process is needed to tackle the human rights crisis impacting Colombia, with more than 600 social activists murdered since the agreement was signed in late-2016.