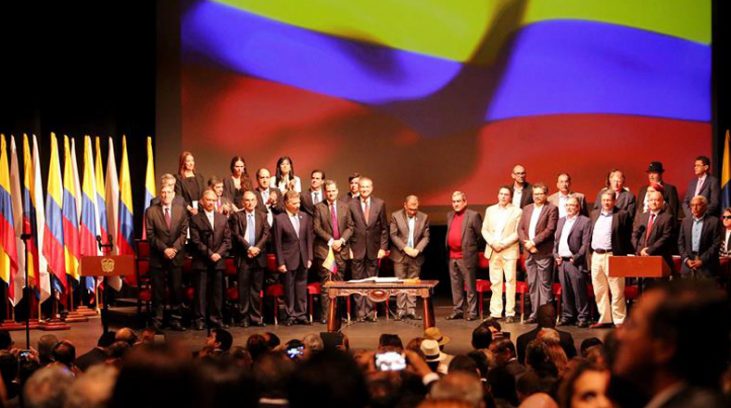 Signed by 147 parliamentarians from the Parliament of the United Kingdom, the Houses of the Oireachtas of the Republic of Ireland and the Legislative Assembly of Northern Ireland

We take this moment of the fifth anniversary of the signing of the 2016 peace agreement between the Colombian state and the Revolutionary Armed Forces of Colombia (FARC-EP) to reiterate its historic importance and our ongoing commitment to supporting its full implementation. We recognise the international community has a responsibility to support the Colombian people in their efforts to ensure the success of the peace process as declared through United Nations Security Council Resolutions 2261 of 2016 and 2366 of 2017.

We welcome the full compliance of the FARC-EP with its obligations regarding the laying down of weapons, as was verified by the United Nations on 27 June 2017, and its ongoing fulfilment of its obligations relating to the transitional justice process being carried out under the Comprehensive System of Truth, Justice, Reparation and Non-Repetition.

We highlight the important progress being made by the transitional justice system in general through its three components, the Truth Commission, the Unit for the Search of Disappeared Persons and the Special Jurisdiction for Peace (JEP). We consider all three to be integral structures for the hope of a sustainable peace in Colombia, and we give our full support to their ongoing work.

However, five years since its signing, we must express our profound concern at the lack of progress overall. The lack of implementation by the Colombian government of some its crucial obligations in the agreement has left the peace process weakened and is denying the Colombian people the opportunity to experience the agreement’s transformative potential to build a sustainable and lasting peace.

The first chapter of the agreement focused on rural reform has advanced far too slowly. A similar picture is faced regarding the chapter on illicit crops with far too few of the families who entered into the manual substitution programme being given access to an alternative economic project, a fundamental part of the agreement to ensure sustainability. We welcome the transformation of the FARC-EP into a political party engaged in parliamentary politics and, while delays have been worrying, we hope to see imminently the full activation of the 16 specially created congressional seats for areas with high levels of historic violence. Advancement in these areas is particularly important given they relate to the structural causes behind the armed conflict.

We congratulate the significant efforts being made by former FARC combatants to set up cooperatives and economic projects as part of their reincorporation process, often with essential support from the international community. However, roughly half have still not been given access to funds, thereby undermining a fundamental commitment in the agreement.

Meanwhile the lack of security in many rural areas and the urgent human rights crisis is extremely alarming. Over 290 former FARC combatants and approximately 1000 community activists have been killed since the peace agreement was signed.

The Colombian peace agreement remains Colombia’s best hope to respond to this crisis. The peace agreement offers a major opportunity to take significant steps in addressing the historic, structural factors that have been at the root of so much violence over so many years.

It is essential that the current and future Colombian governments remember that it is their obligation to implement the peace agreement as it was signed, a commitment made in front of the international community and enshrined in the Colombian constitution. A recent report from the Comptroller General in Colombia stated that at the current rate of funding implementation would take 26 years rather than the stipulated 15 – this is a damning reflection of the attention given to the peace process in recent years.

Just as the international community’s involvement assisted Colombia in reaching the historic moment five years ago which saw the signing of the agreement which brought an end to a half-century armed conflict, it continues to have an important role to play. We will keep working in our respective parliaments and with all those internationally committed to supporting peace in Colombia to ensure the weight of the international community remains focused on implementation of the 2016 agreement and building a complete, stable, and lasting peace.

Members of the Houses of Parliament of the United Kingdom:

Members of the Houses of the Oireachtas of the Republic of Ireland:

Members of the Legislative Assembly of Northern Ireland: