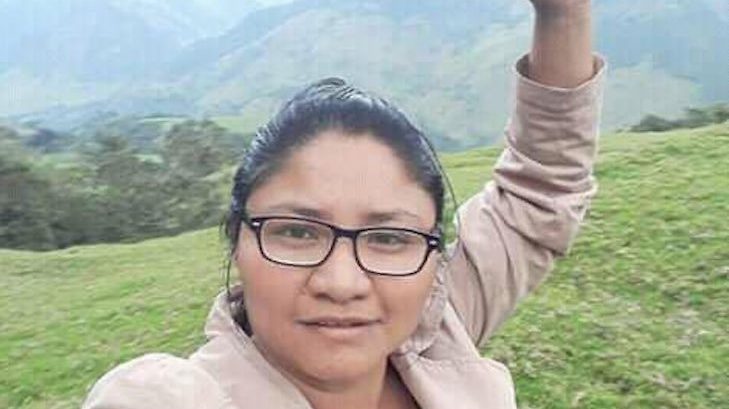 At least twelve people have been killed in a series of attacks in Cauca, southwest Colombia, the country’s most violent region since the signing of the peace deal three years ago.

On Tuesday 29 October, five members of the Nasa Tacueyó indigenous community were killed, including its governor, Cristina Bautista. Four indigenous guard volunteers, who are tasked with protecting communities and who do not carry arms other than traditional wooden staffs, were also killed.

The attack occurred after indigenous authorities encountered a group of armed men and community members they had abducted. The armed men opened fire, killing Cristina Bautista and four other indigenous activists, as well as injuring six more.

On Monday night, just hours before the massacre, Cristina Bautista sent an audio WhatsApp message to a number of contacts. In the message, she said ‘we are in the checkpoint at the headquarters and a black van just drove by. Then men started shooting. Thank God no one was wounded but we are on high alert because there is activity here at the shelter’.

Even before the massacre, the United Nations had said that 52 indigenous community members had been murdered in north Cauca already this year. According to Colombia’s largest national indigenous organisation, the ONIC, 121 indigenous guards and activists have been murdered since President Iván Duque took office in August 2018.

In response, the runner-up in last year’s preisdential election, progressive senator Gustavo Petro, tweeted ‘[w]hat is under way in Colombia is an indigenous genocide, and it will not stop if international justice does not appear’.

The day after the attack, President Duque travelled to Cauca to announce a major deployment of up to 2,500 soldiers to the region. Human rights organisations have opposed the decision to further militarise the region, saying that this could lead to violations by state security forces.

On Thursday 31 October, five more people were killed in two separate attacks in Cauca. In Corinto, three engineers, who were conducting topography research, were killed along with their driver. Reports said they had been using drones to document landscapes in a zone where there is high production of illegal crops.

The victims were named as Carlos Mario López, who was an agricultural engineer based at the National University, Diego Hernán Rodríguez Torres, Diego Alejandro Cerquera Picón and their driver Roosebelt Saavedra. They were not identified as indigenous.

On the same day, in the nearby Caloto zone, another man was found dead with signs of torture. Yet another killing was committed on Saturday 2 November, this time of a Nasa indigenous teenager, 18-year-old Alex Vitonás.

On Sunday 3 November, indigenous activist Jesús Mestizo became the twelfth person killed in under a week in Cauca. Armed men shot him in front of his family in the Toribío zone. Less than an hour earlier, another indigenous activist, Arbey Noscué, survived an assassination attempt nearby. A number of indigenous families were forced to flee the zone due to the killings.

Cauca continues to suffer chronic levels of violence despite the signing of the 2016 peace deal. The FARC’s reformation as a political party under the terms of the agreement, and the state’s failure to secure the region, created a power vacuum which has seen paramilitary and other armed groups compete for territorial control, bringing them into direct conflict with indigenous and rural communities.

More social activists have been murdered in Cauca during the last three years than anywhere else in the country, with over 150 people killed in the region. It is also the most dangerous region for FARC former guerrillas, more than 150 of whom have been murdered nationwide in the same time.

Indigenous communities, human rights organisations, trade unions and opposition political parties have all called on the Colombian government to fully implement the peace agreement as the most effective means of tackling the endemic violence.