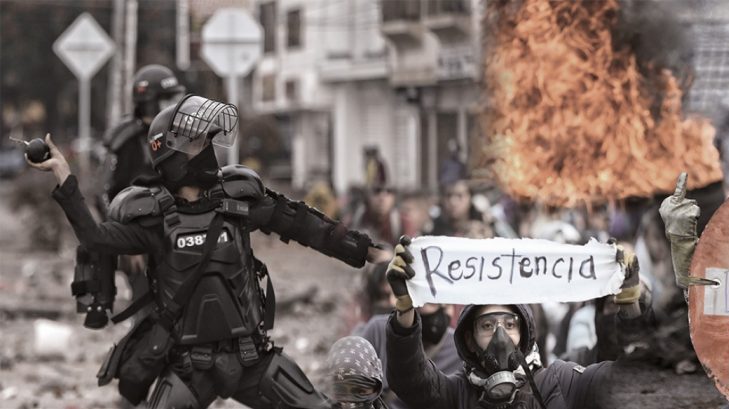 This article by Justice for Colombia was published in The Morning Star on 12 July 2021.

A much-anticipated report by the Inter-American Commission on Human Rights (IACHR) has documented the extent of human rights violations committed by Colombian security forces since massive national strike protests were initiated in late April.

The IACHR released its findings on Wednesday July 7, a little under a month after a delegation visited the country to assess the situation over June 8-10.

The latest round of protests, which have been held periodically across Colombia since November 2019 but which have massively intensified since April this year, called for the repeal of a tax reform which strike organisers said would have disproportionate impact on poorer social sectors.

Other demands included a comprehensive state response to the pandemic, an end to the killings of social activists and concerted government efforts to advance implementation of the 2016 peace agreement.

Rather than engage with these legitimate concerns, the Colombian state responded with intense repression, with security forces reported to have killed at least 44 people while also committing sexual and gender-based violence, attacks on journalists and medics and over 2,000 arbitrary arrests.

More than 80 people have been blinded or partially blinded by police projectiles, while an unconfirmed number have been reported missing after last being seen in police detention.

Given the appalling abuses taking place, in May opposition politicians, trade unions, social organisations and activists requested a visit by the IACHR to compile a report on the human rights situation.

While the government initially rejected a visit, it finally permitted one to go ahead, but not without attempting to influence the delegation’s focus onto what it claimed were abuses committed by protesters.

In its report, the IACHR highlighted unwarranted levels of violence that state forces have inflicted on protesters, in addition to the activities of armed groups.

“The Inter-American Commission expresses its firm condemnation and rejection of the high levels of violence registered in the context of social protest, caused both by the excessive use of force by the public security forces and that provoked by groups outside the protest itself,” said the report.

The report rejected the government’s claim that road blockades formed by protesters to shut down several major highways were an act of terrorism, asserting that such acts are legitimate forms of protest protected under the constitution.

It also criticised the deliberate blocking of internet signals, which it said obstructed complaints against security forces and reduced levels of public scrutiny.

The IACHR also expressed concern over “the disproportionate use of force, gender-based violence, ethnic-racial violence, violence against journalists and against medical missions, irregularities in transfers for protection and reports of disappearance; as well as the use of military assistance, disciplinary powers and military criminal jurisdiction.”

The report made 40 recommendations to protect human rights, several of which replicate demands presented by the National Strike Committee, which is formed of organisations and citizen representatives participating in the protests, to seek a negotiated resolution to the instability. It also called for guarantees over citizens’ right to public protest.

Other recommendations included the relocation of the police from under the jurisdiction of the Ministry of Defence to civilian oversight, with human rights groups having criticised security forces, and especially the Esmad riot police unit, of adopting a war-like mentality towards public protest.

It also called for a ban on the use of lethal force in situations of public order. In response, President Ivan Duque said the police would continue under the Ministry of Defence.

Senators in the congressional peace commission, which comprises pro-peace politicians from various political parties, urged the government to adopt the IACHR’s recommendations so that Colombia can “recover trust and legitimacy on the international stage.”

However, although several of the IACHR’s recommendations address issues which have been under debate since prior to the current protests, there is no obligation for the state to comply with them.

The IACHR report joins a growing list of international condemnations of state violence in Colombia under the Duque government.

The United Nations, European Union, Human Rights Watch and various foreign governments are among those to call for an end to state abuses in Colombia.

So far, however, there has been little to suggest a de-escalation in the repression is imminent.

With protests still taking place on a daily basis in several towns and cities, the many Colombians organising for a fairer society face a security apparatus which appears determined to prevent them from achieving that goal.