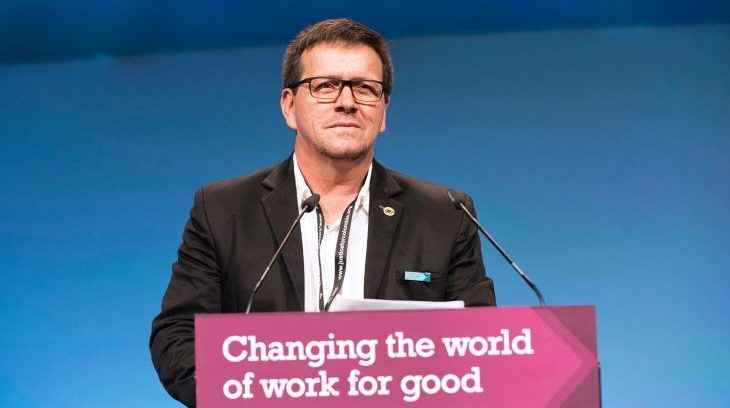 Colombian human rights organisations based in Belgium have denounced what they say are the government’s decision to prevent the trade unionist and former political prisoner Huber Ballesteros from leaving Colombia.

In a statement the organisations, including the Patriotic March, Colombian Exiles and Latin American Solidarity Coordinator, said that Huber was due to travel to Belgium on 4 November but was stopped at migration and told he could not board his flight. He was visiting Belgium for a series of meetings with politicians, trade unions and other organisations on the peace process and the human rights situation in Colombia.

Reports said that he was told that he could not leave because he required permission  from the Special Jurisdiction for Peace, the truth and justice chapter of the 2016 peace agreement. This was despite the fact he has never been convicted of any crime relating to Colombia’s armed conflict.

In 2013, Huber was arrested one week before he was due to travel to England as a guest of the Trades Union Congress (TUC). He was subsequently imprisoned for almost four years on false charges. Justice for Colombia and the TUC organised a major campaign to demand his release. In January 2017, he was finally freed and was able to attend that year’s TUC Congress and give a speech on his experiences. JFC organised the visit.

Huber sits on the Executive Committee of Colombia’s CUT trade union confederation and is vice-president of the FENSUAGRO agricultural trade union. He is also a national coordinator of the Patriotic March political organisation which campaigns for human rights and peace with social justice.

In the statement, the organisations said that preventing Huber from leaving the country was ‘part of a strategy of sabotage and discredit of social leaders that seeks by all means to prevent the implementation of the peace agreement’.

It remains unknown if Huber will be able to leave the country in the foreseeable future.