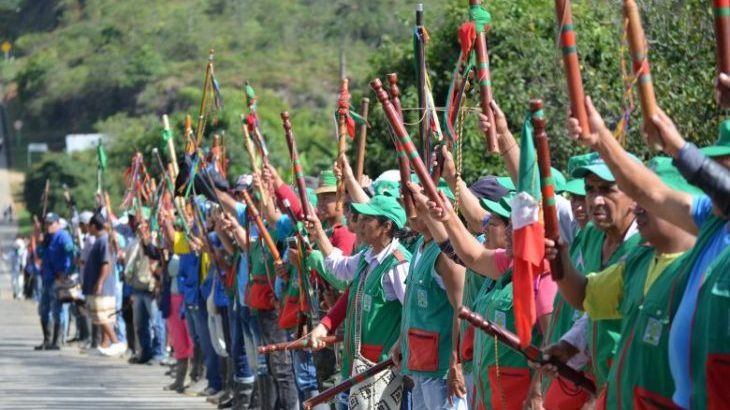 The Colombian government has acknowledged only around a fifth of the number of murdered social activists registered by national human rights organisations in 2020, as shown by official findings released on 22 February.

While the Institute for Studies in Development and Peace (INDEPAZ) registered a shocking 310 social activists murdered in 2020 – including indigenous leaders, trade unionists, environmental defenders, peasant leaders, women’s righta advocates, LGBT activists and so on – the government has put the year’s figure at 66, just over 21 per cent of INDEPAZ figure, with 63 others awaiting verification. Even in the unlikely case that all of these were verified, the total would amount to 129 killings – less than 42 per cent of the INDEPAZ figure. The National Ombudsman’s Office registered 182 cases in 2020.

The government figures were presented by the Presidential Commission for Human Rights and International Issues, headed by the former government minister Nancy Gutiérrez. The relatively low tally in comparison with other sources reflects the trend of recent years: for example, while official government figures register 434 social activists murdered from 2016 to 2020, the National Ombudsman’s figure for the same period is 753 and the INDEPAZ figure is over 1,100.

Although the figures differ significantly, the different sources agree on the most violent region for social activists, with the government registering more killings in the southwest region of Cauca than anywhere else, followed by Norte de Santander, Chocó and Putumayo. INDEPAZ has found Antioquia and Nariño to be the most violent regions along with Cauca. The government said killings were mainly concentrated in zones where armed groups carry out criminal activity such as drugs trafficking and illegal resource extraction.

Iván Duque’s government has faced criticism for its failure to implement security mechanisms contained in the 2016 peace agreement, such as the National Commission on Security Guarantees which was created to dismantle armed groups and their networks. In its most recent report on the peace process, the United Nations Verification Mission in Colombia said that finalising the Commission’s approach was ‘long overdue’.