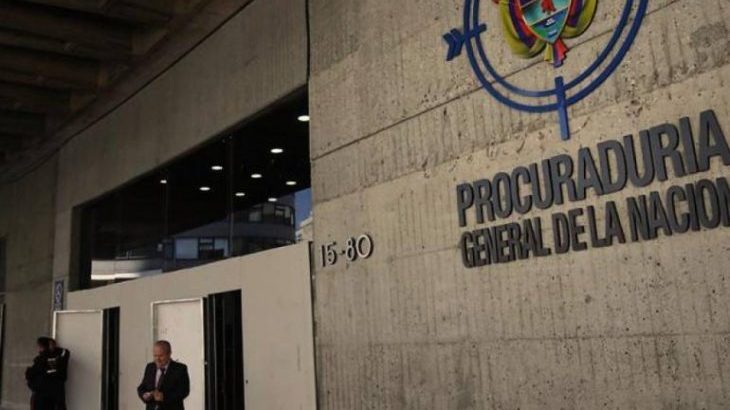 Through social media, the world has witnessed firsthand in recent weeks the abuses carried out by Colombian security forces towards protesters. According to national human rights organisation Temblores, between 28 April and 31 May, police committed 3,789 acts of violence, including 45 killings, 25 sexual assaults, 65 permanent eye injuries and 1,649 arbitrary arrests. But the protests have not subsided, as across the country many Colombians continue to mobilise in support of economic justice, human rights and peace.

Despite the disproportionate levels of state violence, Colombia’s Inspector General’s Office has focused its attention not on those behind the abuses, but on opposition politicians who have sought to protect protesters. The decision by the Inspector General to open investigations into five congress members – each of them a vocal opponent of President Iván Duque’s government – for alleged ‘interference in police procedures’ has been criticised as an attempt to suppress condemnation of state abuses.

The Inspector General’s Office is headed by the former Justice Minister and President of the Supreme Court, Margarita Cabello. In January, Duque appointed Cabello to the position, the latest in a trend of key institutional appointments going to close allies of the right-wing president. Last year, the NGO Transparency International said it was ‘deeply concerned’ about the government’s increased concentration of powers and the potential impact this was having on civil liberties and the autonomy of state institutions.

The first congress member under investigation is Wilson Arias of the Democratic Pole party. It relates to an incident in Cali, the city which has seen the largest protests, in which Arias intervened as police were arresting a group of young people, who were subsequently let go. Arias is among various opposition politicians who has spoken out against police abuses of power, including the mass arrest of peaceful protesters.

Another Democratic Pole congress member, Alexander López Maya, faces investigation for a similar incident in Cali in which he intervened to secure the liberty of a group of young people apprehended by police. López, who has also received threats since protests began, tweeted ‘the Inspector General and former minister of Iván Duque removes me from debates with an absurd and senseless investigation which aims to permit approval for their barbarities without opposition.’

Opposition politicians María José Pizarro, Inti Asprilla and Ángela María Robledo also face investigations over alleged disrespectful conduct towards police officers during a congressional debate on the position of Defence Minister Diego Molano, who has remained in the role despite a motion to remove him over ongoing abuses involving security forces. Pizarro tweeted ‘while political persecution is initiated against those who criticise the government, the deaths and police violence increase dramatically.’

The focus of the investigations raise fresh questions over whether state institutions are functioning along politically-motivated lines. While a number of politicians in Duque’s Democratic Centre have falsely stigmatised protesters as ‘vandals’ and ‘terrorists’, there has been little repercussion. Nor was there any consequence for former president Álvaro Uribe’s social media posts encouraging police to use firearms against protesters, something which has happened on 187 occasions according to Temblores.

In a statement, the congress members under investigation said that ‘some people misuse the Colombian disciplinary system and, through libellous, slanderous and ill-intentioned actions, seek to delegitimise [the congress members] actions as public servants who defend the rights and protection of life, [and] the integrity and safety of young people, women and citizens in general who have been threatened by the improper conduct and abuse of force by members of the security forces.’