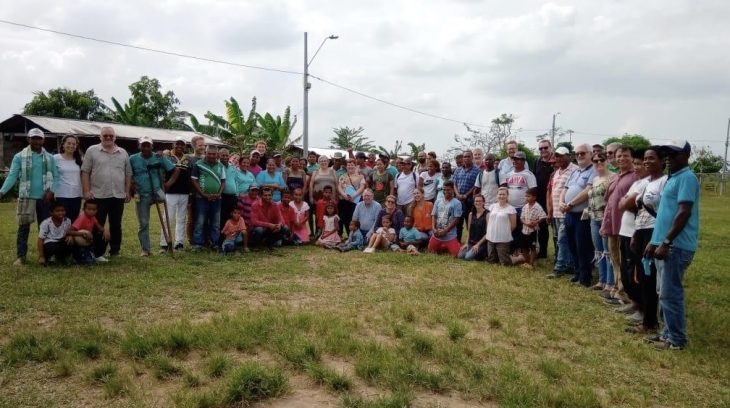 The fourth delegation of the Justice for Colombia Peace Monitor visited Colombia between 16 and 21 February. Formed of European parliamentarians and trade union officials, the delegation met with diverse actors in the Colombian peace process, as well as communities, trade unions and organisations impacted by human rights violations.

The JFC Peace Monitor was launched in early 2018 to provide international support and monitoring for the 2016 peace agreement signed between the Colombian government and the FARC-EP. Although the agreement formally ended decades of armed conflict between the two sides, much of Colombia has remained impacted by political instability and violence. Over 500 community leaders, trade unionists and human rights defenders have been murdered since the agreement was signed in November 2016, as well as almost 190 FARC former guerrillas in the reincorporation process.

During its visit, the delegation met with:

The delegation went to the Urabá region of northwest Colombia which historically suffered some of the worst abuses in the conflict. There, delegates visited the Madre Union community and heard about the ongoing presence of paramilitary-successor group, the Gaitainist Self-Defence Forces (AGC) which continues to commit human rights violations, including threats and restriction of movement, against the local population.

Also, in the Urabá region, delegates visited a community of FARC former guerrillas based in San José in León, where they are developing sustainable fish-farming to support livelihoods following the transition to civil society under the terms of the agreement. The delegation was also told about the specific challenges faced by women in the peace process, as well as the general insecurity impacting former guerrillas.

At the end of the visit, the delegation released a statement presenting its conclusions around the current situation in Colombia. Among its main concerns were the ongoing murders of social activists and former guerrillas, the slow implementation of the peace process and the lack of peace negotiations with the National Liberation Army (ELN) guerrilla organisation. You can read the full statement here.

The delegates on the fourth JFC Peace Monitor mission to Colombia were: