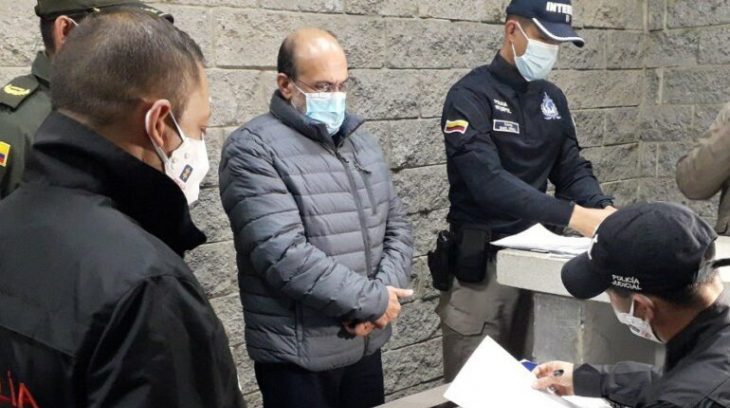 A former paramilitary commander has been arrested in Colombia after returning to the country from a 12-year prison sentence in the United States. Rodrigo Tovar Pupo, known under the alias Jorge 40, was extradited to the US on drugs trafficking charges in 2008. Following his arrival in Bogota, he was arrested on multiple charges relating to massacres, kidnappings and torture.

As commander of the Northern Bloc of the United Self-Defence Forces of Colombia (AUC), the country’s largest paramilitary organisation, Tovar Pupo was behind some of the worst atrocities committed during the armed conflict. Backed by political and economic elites, and collaborating with security forces, paramilitaries committed the majority of human rights violations during the 1980s-2000s. Under the cover of conflict, they routinely targeted trade unionists, activists and political opponents, murdering thousands of civilians and displacing millions more.

In 2019, Tovar Pupo submitted a petition to have his case heard by the Special Jurisdiction for Peace (JEP), the truth and justice court established in the 2016 peace agreement to investigate and prosecute major human rights violations committed in the armed conflict. Although the JEP rejected his petition, Tovar Pupo and other former paramilitary commanders have indicated their willingness to testify over the crimes they committed. More than 80,000 people were forcibly disappeared during the armed conflict, a higher number than those killed by the Southern Cone dictatorships of the 1970s and 1980s combined.

Victims’ organisations have called on authorities to guarantee the security of former paramilitaries in the hope that their testimony can contribute to establishing truth and justice around atrocities committed in the armed conflict. While several paramilitaries were imprisoned in Colombia and the US, the majority of the politicians, business leaders and military officials who allegedly collaborated with these groups have not been investigated or prosecuted. Human rights groups are also calling for reparations for victims of paramilitary crimes.

Earlier this year, human rights organisations criticised the decision by Colombia’s Interior Ministry to appoint Tovar Pupo’s son, Rodrigo Tovar Vélez, to head its victims unit. In 2017, Tovar Vélez said their was a lack of evidence against his father, who he called a ‘political prisoner’. He has since left the role.

Under Tovar Pupo’s command, the Northern Bloc of the AUC committed 333 massacres in northern Colombia, leaving a total of 1,573 victims, between 1996 and 2005. Although the AUC officially demobilised in 2006, paramilitary successor organisations today continue to control drugs trafficking and other illegal activities, while carrying out selective killings of community leaders and social activists. Paramilitaries are believed to be behind many of the hundreds of murders committed since the peace agreement was signed almost four years ago.