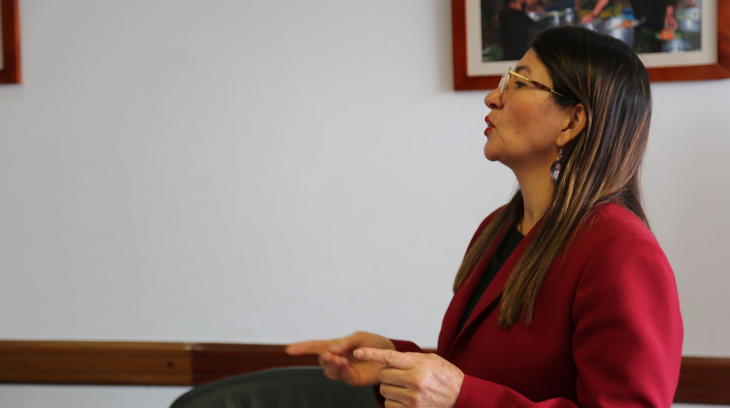 Less than a decade ago, Sandra Ramírez was a FARC guerrilla engaged in conflict with the State, knowing that each day could be her last. Today, she sits in the Colombian Senate as its newly-elected Second Vice-President, a development that has raised hopes for the future of the peace process and reaffirmed the FARC political party’s commitment to its post-2016 struggle within electoral politics.

Under the peace agreement’s terms on political participation, one of its core components, the FARC reformed as a political party and entered the Colombian congress, where it is guaranteed ten seats for two electoral terms, a total of eight years. As one of the FARC’s nominated senators, Sandra Ramírez, who is also known as Griselda Lobo, has represented the party and its supporters at the highest levels of national politics, a situation unthinkable not so long ago. The peace process shifted the parameters of possibility in a country where conflict has been the rule, rather than the exception, for most of its history. While it is unusual enough for a woman to hold the position – let alone one from a rural background – the fact she is a former guerrilla makes this a landmark in the country’s political history.

Sandra Ramírez was elected as the representative of a broad coalition formed of opposition parties which support the peace process and progressive policies such as economic redistribution, social investment and national sovereignty, whether that be with regards to US involvement in Colombia or a policy of non-intervention towards neighbouring Venezuela. While the coalition’s initial nominated candidate was Senator Gustavo Bolívar of the Decency List party, he stepped aside in agreement with the coalition and to ensure gender parity. The backing for Sandra Ramírez to assume the role reflects the wide recognition within the Colombian opposition of the FARC’s important role within the formal political system. It is also a clear gesture of support for the peace process. Since its embryonic stages, the Colombian peace process has faced intense opposition from powerful right-wing sectors, particularly within the governing Democratic Centre party.

Following her election, Sandra Ramírez gave an interview in which she said:

‘This appointment is a recognition of the peace that we have been seeking since 1984 through a political solution to the social and armed conflict. The best thing that happened to Colombia was to sign the Agreement, which meant we would assume these positions to make visible and advocate for the implementation of the Havana peace agreement, and we will address the situation we are going through with the COVID-19 pandemic.’

Among the policies advanced by Sandra Ramírez and her party, as well as the broader progressive opposition, are full implementation of the peace process. One example is in the regional development programmes, known as PDETs, stipulated for several of the poorest and most conflict-affected parts of the country. Ramírez said that while advancing PDETs was the responsibility of central government, administration of the programmes had been outsourced to municipal authorities. She also reaffirmed her support for transitional justice programmes created in the peace agreement which aim to establish truth and justice over atrocities committed in the conflict.

However, despite the optimism generated by Sandra Ramírez’s election, the situation for FARC former guerrillas on the ground is starkly different. Targeted killings have escalated to horrifying levels, with 219 FARC members murdered since the peace agreement was signed in November 2016. Additionally, at least 40 close family members have been murdered, including a 15-year-old boy taken off a bus and killed by paramilitaries last month. In mid-July, FARC members were displaced from the transitional zone where they were based in Ituango, northern Colombia, due to high levels of paramilitary violence in the area. Additionally, hundreds of community leaders, social activists and trade unionists have been murdered during the same period, with the United Nations emphasising the need to guarantee security for at-risk communities and former guerrillas as an urgent priority for the peace process.

Sandra Ramírez intends to continue her party’s mission to build peace and reconciliation in Colombia: ‘We are clear that this is a long-term revolutionary project, we have a solid base, we are building unity inside and outside of the party to consolidate a broad coalition so we can be ready for future elections.’