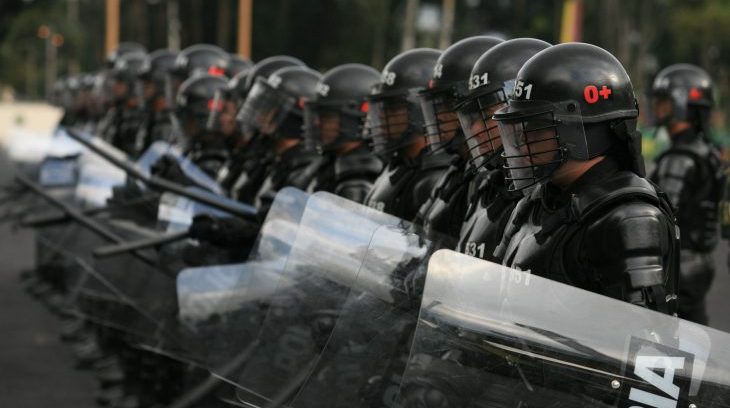 Relatives of a student killed by security forces in 2005 have challenged a decision by the Attorney General to close criminal proceedings against a former senior official in the Mobile Anti-Disturbance Squadron (ESMAD), the riot police unit responsible for the death.

Gabriel Bonilla oversaw the operation to repress protests at the Universidad del Valle which resulted in the death of Jhonny Silva Arangueren, a chemistry student at the university in Cali, Colombia’s third-largest city. Jhonny died in hospital after being shot in the head by an ESMAD agent during attacks on protesters.

As the identity of the agent who killed Jhonny could not be established, Bonilla was charged in 2010 with having been responsible for homicide. However, an appeal reversed the decision and archived the case, dropping the investigation into Bonilla. The victim’s family will now petition the Supreme Court of Justice to repoen the case. Gabriel Bonilla is currently police commander in the department of Córdoba.

Lawyers representing the family argue that Bonilla should not be immune from prosecution and that he should not have been promoted following the charges made against him. They also say that the case was archived even though the investigation was incomplete.

‘The government and defense ministers justify the actions of police, they treat them as heroes and, obviously, the reward is impunity on the one hand and promotion on the other. It guarantees that the perpetrators and violators of human rights can maintain silence over the way in which the police act against young people, students and protesters,’ said lawyer German Romero.

The ESMAD has a long history of violence against civilians, particularly during protests. In February 2020, a report by the United Nations’ Office of the High Commissioner for Human Rights recommended that it be reformed due to its failure to comply with international standards of policing. The report highlighted cases of ‘torture of protesters, including forced nudity, death threats with racist undertones and repeated beatings’ committed by ESMAD agents.

State abuses remain a major concern in Colombia, with police and state agents accused of multiple killings in the last two years. A number of police officers face trial over the brutal repression of protests in Bogota last September which saw 13 people killed.