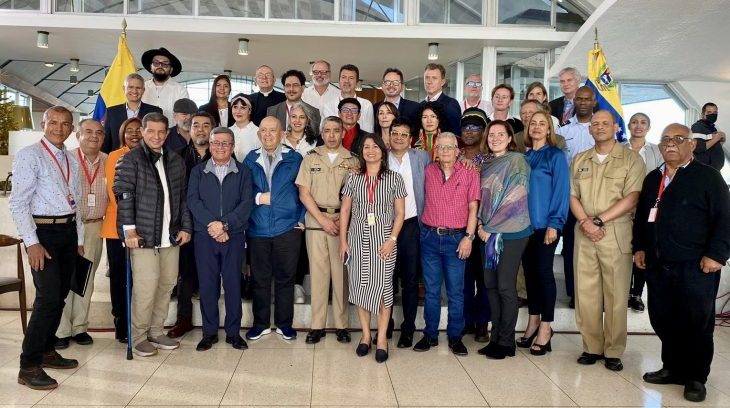 The government of President Gustavo Petro and the country’s largest guerrilla insurgency, the National Liberation Army (ELN), formally began peace negotiations on Monday 21 November 2022. We will be posting regular updates here. You can return to this page for latest news and developments as the talks progress.

One week into negotiations and the two sides have agreed to invite Chile, Brazil and Mexico to participate as guarantor countries alongside already-confirmed guarantors, Cuba, Venezuela and Norway. Germany, Switzerland, Sweden and Spain have been invited to accompany the dialogues. The United Nations and Colombia’s Catholic Church are also formally involved. There has also been an approach to the United States over sending a special envoy.

The government has increased women’s participation in the dialogues by adding four women to its negotiating team, which is now evenly split along gender lines. The new additions are Nigeria Rentería, an indigenous and minority rights lawyer who previously participated in peace talks and is a former ASI party candidate for the governorship of Chocó; political analyst and journalist Mabel Lara, whose work has been awarded by the United Nations and the Swedish government, among others; presbyterian pastor Adelaida Jiménez, who is a member of the World Council of Churches; and journalist and author María Jimena Duzan, who has written multiple books on Colombia’s conflict and is an established presence in Colombian and international media.

Recently elected president Gustavo Petro pledged to pursue fresh talks with the ELN after the previous government of Iván Duque ended the talks which had taken place in 2017-18 under the Juan Manuel Santos government. Duque refused to reopen dialogue despite requests from the United Nations, opposition parties, civil society groups and ELN leaders themselves.

As meetings got underway, the head of the UN Mission in Colombia, Carlos Ruiz Massieu, said ‘I celebrate the negotiations between the government and the ELN in Caracas,’ encouraging ‘Colombian society to take advantage of this historic opportunity and deepen peace in Colombia.’

The ELN was formed in 1964 and launched revolutionary armed struggle against the state. While other guerrilla groups reached settlements with the Colombian state, including the M19, of which Gustavo Petro was a member, in 1990 and the FARC in 2016, the ELN has continued operating militarily since its foundation. It is estimated today to have between 2,000-3,000 members and is active in various regions, particularly in the eastern departments such as Arauca and Norte de Santander, as well as the Pacific region of Chocó.

As talks began in Caracas, the two negotiating teams issued a joint declaration which announced the decision to ‘resume with full political and ethical will the process of political dialogue between the national government and the ELN, as demanded by people in rural and urban territories who suffer from violence and exclusion, and other sectors of society.’ The declaration pledged to ‘build peace from a democracy with justice and with tangible, urgent and necessary changes, [while] involving the greatest possible and effective participation of society, prioritising historically marginalised sectors.’ In a show of unity, the two sides came together for a photograph that implied a shared objective of reaching a negotiated agreement.

As well as hosting talks, Venezuela is a guarantor country to the talks, alongside Cuba and Norway. The latter two are also guarantors to the peace process with the FARC, while Venezuela accompanied the 2012-16 negotiations which resulted in that historic agreement. Their role is to provide international involvement in the talks, to mediate in disputes and to advise where necessary. Representatives of the UN, the Catholic Church and the armed forces will be present in an observational capacity.

The government negotiating team is headed by Otty Patiño, once a member of the M19. It also includes the High Commissioner for Peace, Danilo Rueda, a long-time human rights defender who has worked closely with Justice for Colombia for several years. Senators Iván Cepeda and María José Pizarro of the governing Historic Pact coalition are also on the negotiating team. Cepeda and Pizarro have both visited Britain and Ireland with JFC: in Pizarro’s case, this was just two months ago when she attended the Labour Party annual conference and met with politicians and trade unionists in Britain and Ireland.

The government negotiating team has been assembled from diverse fields. Among its other members are environmental expert Rodrigo Botero, whose portfolio includes managing some of Colombia’s most biodiverse natural parks; Embera-Katío indigenous anthropologist Dayana Domico, who was previously a youth leader at the National Indigenous Organisation of Colombia (ONIC); retired military officials Álvaro Matallana and Orlando Romero; Romsemary Quintero, the head of the Colombian Association of Small and Medium Businesses (ACOPI); and the president of the FEDEGAN ranchers’ association, José Féliz Lafaurie, whose inclusion has surprised some observers over FEDEGAN’s links to the political right. The broad makeup of the negotiating team reflects the intention to ensure a wide spectrum of Colombia’s social-political sphere is included in the dialogues. As the head of the ELN delegation, Pablo Beltrán, noted, ‘it is the most diverse government delegation.’

‘The first meeting that we have held today with the ELN delegation gives us the certainty and deep conviction that we are going to achieve the purpose that unites us: to be sons and daughters of the same homeland with changes and transformations,’ said Rueda. ‘Colombians cannot see each other as enemies. Our task is reconciliation, to build a nation in peace and equity. That’s why we have come to the table,’ said Beltrán.

The Venezuelan government issued a statement in which it ‘greeted with renewed hopes’ the talks that it is hosting, with Cuba and Norway both potential venues for further rounds of meetings. According to the statement, Venezuela ‘will not spare any effort in the accompaniment in this transcendental moment of the process of reconciliation in our beloved Colombia, with the clear conscience that this is the path for Latin America and the Caribbean to consolidate itself as a zone of peace and prosperity.’