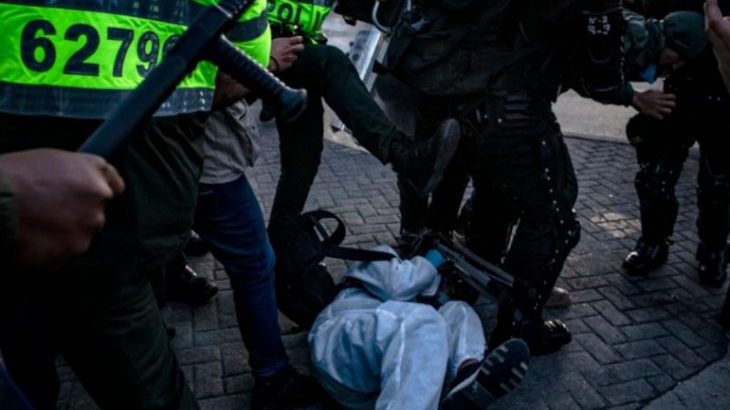 The Colombian government is facing serious criticism over its deadly response to public protests in which security forces opened fire on unarmed protestors with up to 13 people killed on 9 and 10 September.

On 9 September, police repeatedly tasered and beat 44-year-old Javier Ordóñez as he pleaded for them to stop. He later died in hospital. Footage of the initial incident went viral, sparking massive protests over police brutality. The public reaction has been compared to the protests in the United States over the police murder of George Floyd.

A post-mortem revealed Ordóñez had died from a brain haemorrhage caused by a blow to the head. He had suffered devastating injuries, including nine skull fractures, a ruptured liver and more than 40 separate blows, and been tasered 13 times. Congress member Katherine Miranda said ‘there is sufficient evidence to denounce death from torture.’

The police officers filmed attacking Javier Ordóñez were identified as Harby Damián Rodríguez and Juan Camilo Lloreda. They are currently under investigation and could face charges. Lawyers representing Ordóñez’s family have called for the officers to remain in prison while they await possible trial.

As protesters took to the streets in Bogota and various other towns and cities, they encountered a shockingly disproportionate response from police. Mobile phone footage showed police and plain-clothes agents shooting into crowds and attacking non-violent protesters. In two nights of protests, police killed 13 people in Bogota and the surrounding area.

Most of the dead were young, such as 19 year old students Angie Baquero and Julieth Ramírez and 17-year-old delivery driver Jaider Fonseca. Other victims included Germán Fuentes, who was 25, Camilo Hernández, 24, and 27-year-old Cristian Hurtado Meneses, an electrician and enthusiastic athlete. Witness reports suggested many of the deaths involved people killed while peacefully protesting or simply passing by.

Bogota’s mayor, Claudia López, subsequently accused police of disobeying her ‘express and public instructions’ and ‘shooting indiscriminately’ at civilians. López also called for those guilty of killing civilians and violating human rights to be held to account.

While Colombia’s defence minister, Carlos Holmes Trujillo, apologised for the murder of Javier Ordóñez, the response of security forces gave a truer indication of the government’s attitude towards the protests. Under President Iván Duque, the United Nations and other organisms have warned the government to respect the constitutional right to peaceful protest following state repression of protests in regions such as Catatumbo in northeast Colombia and Nariño in the far south, where security forces have killed several people. While those cases generated limited coverage, the use of similar tactics in the capital has cast the spotlight on Colombia’s authoritarian model of social control.

The widespread violations have elicited demands for the government to be held to account. Opposition senator Iván Cepeda, who has long been involved in campaigns to prosecute state involvement in atrocities, said he would petition the International Criminal Court (ICC) to open proceedings against Duque and Trujillo for crimes against humanity including massacre and torture committed by the police. According to Cepeda, the ICC’s involvement is necessary to overcome the impunity in which more than 95 per cent of police abuses remain unpunished.

On 14 September, the United Nations High Commissioner for Human Rights, Chile’s former president Michelle Bachelet, said that ‘excessive use of force could have caused the deaths of up to 13 people and injuries to 300 more, including 77 from gunfire.’ Bachelet also called for full implementation of the 2016 peace agreement, which faces multiple challenges, to protect human rights in Colombia. The use of the military in situations of domestic policing was a major concern in several countries, including Colombia, she said.

The events of 9 and 10 September have increased calls for security forces to be demilitarised in civil operations and to receive human rights training. In February this year, a UN human rights report called for the ESMAD riot police unit to be disbanded and for investigations into suspected abuses to be conducted under the civil justice system rather than by the military. The ESMAD is behind some of the worst violations committed against civilians, such as the death of 16-year-old Dilan Cruz last November.

The state violence committed during the Bogota protests comes amid an escalating human rights crisis in Colombia. 2020 has seen more than 200 social activists murdered and 60 massacres committed, principally by paramilitary successor organisations which control drugs trafficking and other illegal activity in various parts of the country. Despite the collapse of security in many regions, the government has not properly implemented security measures contained in the peace agreement to tackle the crisis.