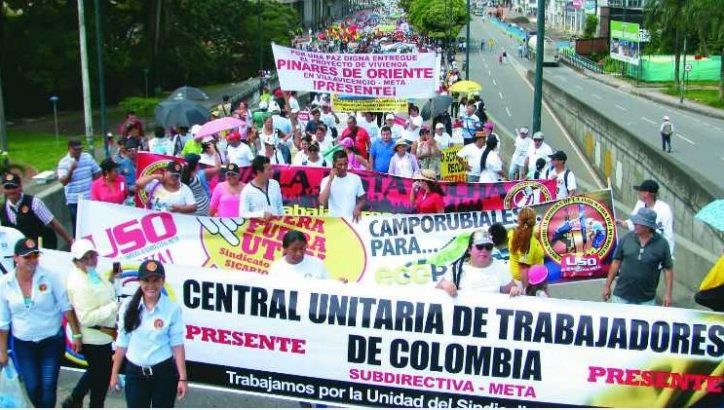 Colombians will march today in protest at the government’s proposed pension and labour reforms, which trade unions and social organisations say will further squeeze workers in what is already one of the world’s weakest country for labour rights.

Hundreds of thousands of people are expected to take to the streets in a mass show of opposition towards President Iván Duque’s economic plans, as well as to show support for the peace process and demand an end to the shocking levels of violence against social activists, trade unionists and FARC former guerrillas.

Other strike demands include greater investment in the national education system, which has seen ongoing strikes for over two years due to chronic underinvestment, poor conditions and increased privatisation in public schools and universities. The FECODE teacher union, the largest trade union in Colombia, has staged multiple strikes, including a 37-day stoppage that shut schools across the country in 2017.

The Paro National (National Strike) has been convoked by groups and organisations from across Colombian society, including trade unions, students, opposition political parties and human rights organisations. The International Trade Union Confederation (ITUC) is also supporting the strike.

In a joint-statement, the ITUC and the Trade Union Confederation of the Americas (TUCA-CSA) said:

‘The Colombian trade union movement, together with social and student movements, is mobilised for 21 November, a massive day across the country, against labour reform, pension reform, against economic policies which submit to financial capital and in support of peace. This harmful agenda imposed by Iván Duque’s government, together with the Colombian oligarchy, is part of the conditions that the International Monetary Fund (IMF) and the Organization for Economic Cooperation and Development (OECD) have imposed to continue supporting neoliberal policies which have deepened poverty, exclusion and the right to sovereign development to the country.’

President Duque has been criticised over apparent attempts to stigmatise protesters as intending to commit violence. In a national television address, he said ‘some see the right to protest as an opportunity for agitation based on lies that only seek to generate division between Colombians. We will not allow that some return us to old, senseless confrontations.’ Despite the government’s repeated claims, it has not provided any evidence that certain groups intend to commit acts of violence, while all political parties and organisations have called for the protests to be peaceful. There are also reports of large military buildups in city centres, leading to fears that security forces will seek to repress protests.

British and Irish trade unions have expressed support for the national strike in Colombia. The Trades Union Congress tweeted ‘We are proud to support the National Strike in Colombia later today. Two thirds of all the trade unionists murdered in the world are from Colombia. We stand in solidarity with our Colombian sisters and brothers in their struggle for peace and social justice.’

The Irish Congress of Trade Unions also offered support to the strike. ‘Solidarity from Ireland with today’s trade union protests in Colombia against labour & pension reform, against economic policies which surrender to finance capital, and for peace,’ it tweeted.