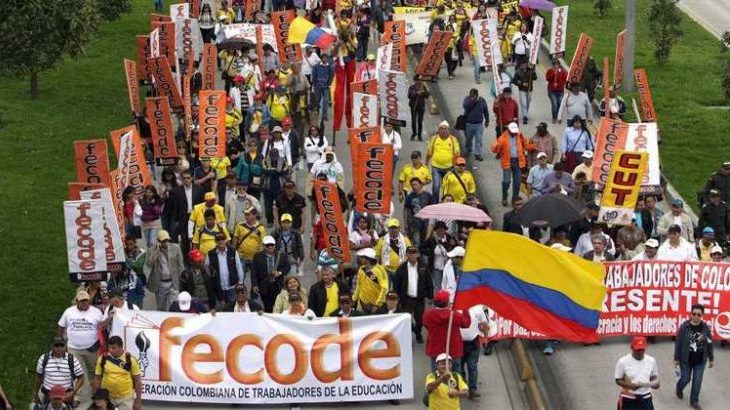 The president of Colombia’s FECODE teachers union, the largest trade union in the country, has written this article for the National Education Union’s Educate magazine. In the article, William Velandia discusses FECODE’s long-running dispute with the Colombian government over low pay, poor conditions and chronic underinvestment in the public education system. He also addresses the trade union-led protests earlier this year over social and human rights, which were met with extreme repression by the Colombian government. You can read William’s article below, followed by a contribution from JFC.

‘Our struggle for a fairer society goes on’

Colombian teachers face many challenges in their efforts to provide decent education for children and young people. Public education is in a precarious situation due to Government policies, as well as violence against trade unionists, which has impacted our country for too long. In 2019, FECODE presented findings to Colombia’s transitional justice court: more than 1,000 Colombian teachers were murdered between 1986 and 2010, simply for defending their rights and those of their students.

Today, Colombian teachers are still being threatened and killed. Violence against trade unionists and social activists is just one reason – alongside inequality and our Government’s disregard for the peace process – why thousands of Colombians joined protests in April this year. The latest round of protests – widely known as the National Strike and a continuation of demonstrations which took place in 2019 – were sparked by the Colombian Government’s proposed unjust tax reform that would have seen many slip further into poverty. The demonstrations inspired millions of Colombians to confront President Iván Duque’s Government over its dreadful record on human rights and peace.

Protestors’ demands were reasonable: economic support for families impacted by the pandemic, stronger worker protections, universal access to health and education, as well as respect for human, social and democratic rights. Security forces responded to the events with extreme repression and violence, killing at least 44 people and abusing many others.

Relatively few Colombians are union members, due to the risks involved. Low union membership is a key reason for the appalling labour conditions workers face, which have deteriorated even further under Duque’s right-wing Government. The education sector is an exception, with many teachers being active trade unionists. FECODE’s opposition to chronic underfunding of public education, and our campaign for decent labour conditions, have resulted in baseless smears against our union and its members from right-wing politicians.

But as the National Strike shows, we will not back down from our struggle to create a fairer society. The solidarity we receive from around the world strengthens our resolve, especially from our friends at the NEU and other teacher trade unions. We’re facing an ongoing human rights and social crisis in Colombia, but with your support and that of Justice for Colombia, we will keep striving towards a brighter future.

The NEU has been a tireless and committed supporter of JFC’s campaigning around trade unionism, human rights and peace in Colombia.

The 2016 peace agreement, strongly backed by Colombian trade unions and other organisations, brought optimism to millions of people and has made important progress. The investigations into state atrocities committed during the conflict, and the Revolutionary Armed Forces of Colombia guerrilla movement’s reformation as a political party, are two examples.

But the peace process is under threat from the horrific human rights crisis and intense political opposition among extreme sectors of the political and economic elite. International support helped achieve

Colombia’s historic agreement and is still needed to advance its implementation. By affiliating with JFC as an individual or as an NEU district, you can join the campaign to ensure peace becomes a reality for the Colombian people.

Read or download the latest issue of Educate (which features this article on page 37).