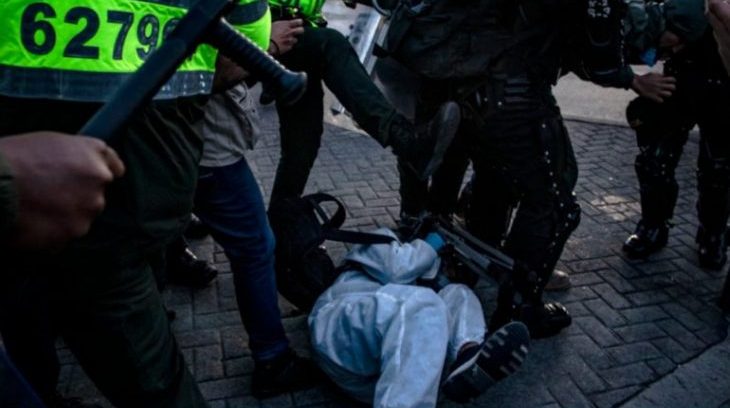 Human rights organisations and politicians have criticised what they say were disproportionate levels of police repression of peaceful protesters in major Colombian cities. On Monday 15 June, marches were held to protest multiple issues, including the government’s prioritisation of banks and businesses over people in the coronavirus pandemic, corruption and widespread human rights violations.

In Bogota, protesters took to the streets carrying Black Lives Matter banners and calling for justice following last month’s police killing of a young African-Colombian man, 24-year-old Anderson Arbeloa, who was beaten to death by police officers allegedly after breaking lockdown rules. ESMAD riot police officers attacked and detained several people who had been playing music as they marched along the city’s main thoroughfare, the Seventh Avenue.

Social media videos showed images of injured journalists from independent media organisations, as well as police attacking non-violent protesters. Riot police also fired teargas in residential areas. More than 100 people were arrested and 20 injured, according to reports. The Foundation for Press Liberty (FLIP) said 13 journalists were among those attacked.

In a tweet, opposition congress member Gustavo Petro said that the Mayor of Bogota, Claudia López, ‘imitates Trump in the treatment of protesters against racial discrimination.’

The ESMAD routinely uses disproportionate force against Colombian citizens, with a report by the United Nations Commissioner for Human Rights earlier this year calling for the unit to be urgently reformed. Since it was founded in 1999, the ESMAD has killed at least 34 people, including the 18-year-old student Dilan Cruz last November. The current government of President Iván Duque has faced criticism over its treatment of peaceful protest, which is protected under the Colombian Constitution.