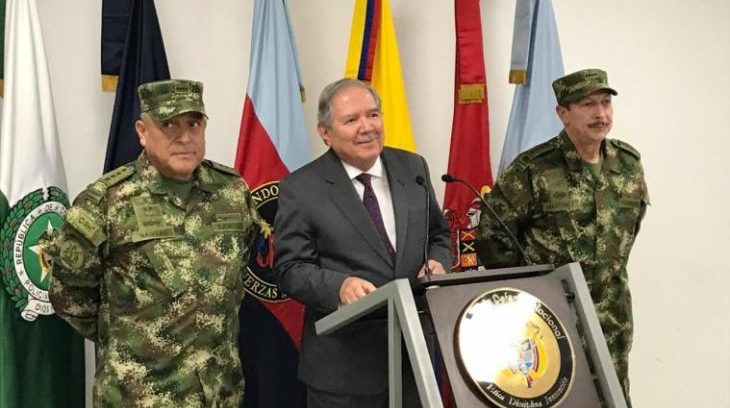 Colombia’s Defence Minister, Guillermo Botero, was forced to stand down on 6 November following a string of human rights scandals involving the military. It followed attempts in the Colombian senate to sanction Botero over a military raid in August that killed at least eight children.

Botero was appointed to the role of Defence Minister in Iván Duque’s inaugural cabinet in August 2018. Since then, however, several high-profile cases have made his position untenable. With pressure increasing on President Duque, and with Botero facing a motion of censure that he was likely to lose, the Defence Minister was forced to resign.

Duque has faced intense criticism from opposition parties, trade unions and human rights organisations over his government’s failure to tackle chronic insecurity across the country which, according to Colombian human rights organisations, has seen more than 200 social activists killed since he took office fifteen months ago. Controversies around the military have further eroded public trust in the government’s commitment to protecting human rights.

Among the cases which made Botero’s position untenable is the army extrajudicial killing of FARC former combatant Dimar Torres, who was deliberately targeted and killed on 22 April. Dimar Torres was working on reincorporation programmes for FARC members when he was murdered. Initially, Botero falsely claimed he had tried to grab a soldier’s gun, as footage recorded by local community members on their phones showed soldiers attempting to cover up the crime by disposing of Dimar’s body.

The military’s conduct was called into further question in May, when the New York Times revealed that senior army officials had ordered soldiers to double the number of militants killed or captured, with standards of engagement lowered to help improve performance figures. This raised major fears of potential new extrajudicial killings and sparked a backlash from human rights and victims organisations.

This exacerbated the existing controversy over Duque’s appointment of General Nicasio Martínez Espinel, strongly accused of overseeing previous human rights abuses, to head of the armed forces. Between 2004 and 2006, under the hardline government of Duque’s mentor Álvaro Uribe, Martínez Espinel was second-in-command of the Tenth Battalion, which is suspected of committing scores of extrajudicial executions. Many victims were dressed in guerrilla uniforms and presented as ‘combat kills’. More than 2,000 of these so-called ‘False Positive’ army killings of civilians committed between 1988 and 2014, the majority during Uribe’s two terms as president, are currently under investigation by truth and justice tribunals established in the 2016 peace agreement. It was General Martínez Espinel who was behind the directives exposed by the New York Times.

In September, Duque suffered a major embarrassment over a report he presented to the United Nations which pertained to contain photographic evidence that Venezuela’s government was harbouring Colombian guerrillas. While the report claimed to show guerrilla camps in Tachira in Venezuela, a Colombian newspaper quickly revealed that they were in fact taken in eastern and southern Colombia around four years earlier.

The final straw was the revelation that the 29 August bombing targeting an alleged dissident camp in the Caquetá region had killed at least eight children despite local communities and human rights organisations having repeatedly warned authorities that armed groups were forcibly recruiting minors in the region. At the time, Duque said the attack was ‘strategic, meticulous and impeccable’ and carried out against ‘narco-terrorists’.

While the government maintains it did not know children were in the camp when it authorised the attack, it had subsequently failed to divulge the information once the identities of several victims, one of whom was only 12 years old, became clear. Reports this week said that as many as 18 minors may have died in the attack, with some initial survivors hunted down with dogs and drones before being killed.

Senator Roy Barreras of the U Party presented a motion of censure against Botero, who he said had deliberately withheld the identities of the victims from the public. ‘You hid from Colombia that on this day you bombed seven children and maybe four more, because the [government department of] Legal Medicine evidence shows that another four bodies were so destroyed, they could only identify they were under 20 years old.’ This was prior to the new reports of up to 18 minors killed.

With the credibility of Colombia’s armed forces severely dented by the ongoing controversies, Botero finally resigned his post. His replacement is Carlos Holmes Trujillo, previously Duque’s Foreign Minister who has served various roles in the last five Colombian governments. Holmes Trujillo is a founding member of the governing Democratic Centre which strongly opposed peace negotiations with the FARC. With the country wracked by insecurity, and concerns over security forces’ repressive treatment of public protest, the spotlight will be closely on him.