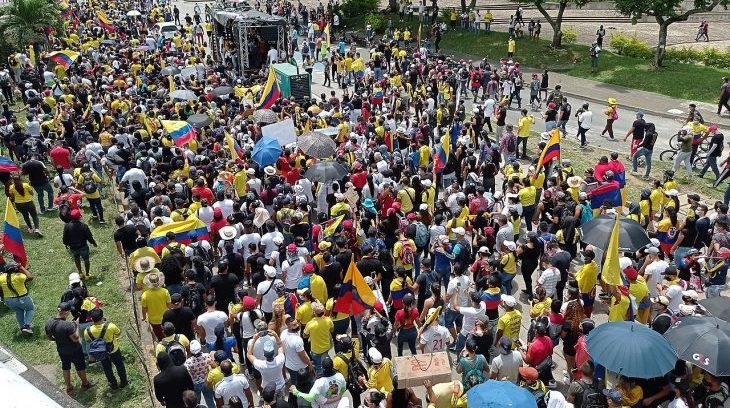 On 28 April 2021, huge ‘National Strike’ mobilisations were launched across Colombia to reject a proposed tax reform that would disproportionately increase living costs for lower and middle classes. Protests also focused on long-running demands in response to growing poverty, corruption, murder of social activists and a failed implementation of the peace agreement. Finally, protests called for a comprehensive response to the global pandemic, which has had a devastating impact in Colombia as millions of people have lost their incomes.

Since the protests began, Colombian police and apparent para-state agents have committed extreme human rights abuses. With several people reported killed and many more injured and missing, there has been a deluge of international condemnation. The violence has been particularly intense in Cali, Colombia’s third-largest city. After five days the Colombian government suspended the tax reform but protests have continued amid widespread acts of police violence.

Social media videos have shown the brutal police response: shooting live ammunition at crowds, firing gas canisters at people’s faces, beating isolated protesters, arbitrary arrests, indiscriminate use of high-grade weaponry and launching tear gas into enclosed spaces are just some of the abuses committed. State agents have committed sexual assaults, with one particularly harrowing case that of a 17-year-old who took her own life after reporting that a group of police had sexually assaulted her. She was filmed shouting that police were removing her trousers as they dragged her into a police station.

Several videos have also shown people in civilian clothing shooting at protesters. In one incident, several men exited a truck and opened fire – protesters reportedly found police IDs and jackets in the vehicle. On another occasion, a man fired at unarmed indigenous protesters while standing alongside a police officer who did nothing. Ten people were injured. Such acts are particularly alarming in the context of Colombia’s long history of state collusion in paramilitary terror.

As of 18 May, the Colombian human rights organisations Temblores and INDEPAZ had documented 2,387 cases of police violence, as well as 43 homicides, including four minors, 18 cases of sexual violence and 33 victims of eye injuries. Despite international calls for an end to abuses, the Duque government continues meeting protests with force.

Furthermore, the government has stigmatised and encouraged police violence against protestors. Ministers and senators in Duque’s party, the Democratic Centre, have falsely accused protesters of belonging to or being backed by guerrilla groups, singling out particular organisations and leaders. These baseless smears include:

There has been widespread international condemnation of the human rights abuses. The United Nations High Commissioner for Human Rights criticised the police’s use of ‘excessive force’ while the US Embassy in Bogota called on police to exercise ‘restraint’ to avoid ‘additional loss of life’. The European Union called for the ‘disproportionate use of force by the security forces’ to ‘stop’. 55 Members of the US Congress signed a letter calling the human rights situation ‘out of control’. A coalition of Colombian organisations handed a report to the International Criminal Court to investigate the abuses while the Inter-American Commission for Human Rights has requested permission from the Colombian government to investigate recent events.

The UK government has not directly criticised the human rights abuses committed by the Colombian police. However, the UK Embassy in Colombia said it was ‘saddened and concerned’ by the ‘widespread violence’ while Minister Wendy Morton said she was ‘deeply saddened by violence in Colombia’. MPs, members of the House of Lords and trade unions have condemned the state response to the protests.

While initial protests were organised by the National Strike Committee formed of trade unions and social organisations, they have been intensified by citizens not formally represented in these groups. Young people from poor urban neighbourhoods have been particularly involved. On 10 May, the National Strike Committee and the government met to discuss demands including a withdrawal of regressive social reforms, an end to police violence and the initiation of meaningful negotiations. On 16 May, there was a second session with a single demand for the end of police violence before negotiations could begin. So far, no meaningful agreement has been reached.

Strike organisers have made several priority demands to resolve the crisis. These include:

There is little sign that the Duque government intends to end, or ease, the repression of public protests. The Duque government has previously faced criticism over an apparent lack of will to implement the peace process and its efforts to downplay the human rights crisis that has seen more than 1,000 social activists and 270 former guerrilla combatants murdered since the peace agreement was signed less than five years ago.