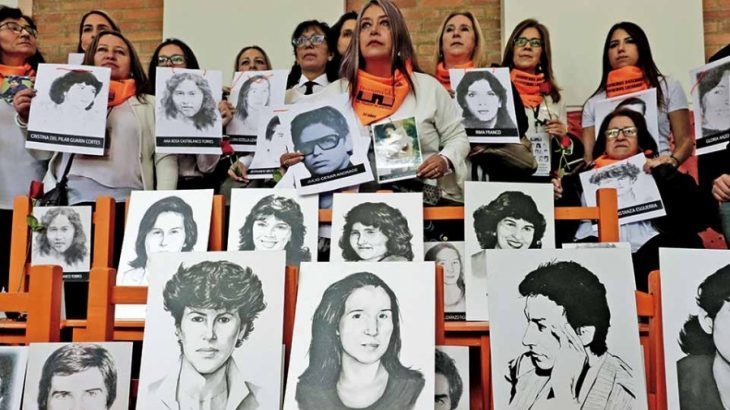 There is little respite to the human rights crisis impacting communities across Colombia. November was another very violent month. According to national human rights groups, by the end of November at least 43 former FARC guerrillas and 159 social activists had been killed since the start of 2021.

Here is JFC’s monthly update on cases of human rights abuses in the country.

2 November – The indigenous Kankuamo community in César, northern Colombia, issued an alert over ongoing systematic violations by authorities which are impacting on its members’ human and social rights. The statement said that authorities were failing to deal with threats to the community and encouraging stigmatisation against it, while violating the autonomous jurisdiction granted to indigenous groups.

3 November – A father and his two sons were taken from their home and subsequently murdered in Orito in the southern region of Putumayo. The attack was Colombia’s 82nd massacre of 2021, according to figures compiled by the INDEPAZ human rights NGO.

5 November – The 84th massacre of 2021 was committed in Puerto Leguizamo in the southern region of Putumayo. Two of the victims were peasant farmers who were taken from their homes and subsequently killed. The third person targeted was an 18-year-old who was piloting a small boat when he was intercepted and killed.

5 November – Two armed men on motorbikes threatened to kill two girls as they returned from school to their homes in the Puente Nayero community, a self-determined ‘humanitarian zone’ established to protect human rights and social rights. The men pulled guns on the girls and attempted to abduct them. Police apprehended one of the assailants, identified as William Harry, an alleged member of a paramilitary group which is active in the zone.

5 November – Violence against teachers continued with the murder of Eberto Silva Sánchez, who worked at the El Dorado educational institute in the town of Albania, department of Caquetá. He was a member of the AICA teachers union based in Caquetá. Armed assailants arrived at the school as Eberto was teaching a class. They took him from the classroom and killed him just a few metres away. A number of teachers have been targeted at their workplaces in recent years.

6 November – Another massacre, the 85th of the year, was carried out in Agua de Díos in the central region of Cundinamarca. Two people were found dead in a vehicle, alongside a third person who subsequently died in hospital. The two men and one woman had suffered gunshot wounds.

7 November – On 7 November, Colombian trade unionist Robinson Jiménez died of his injuries one month after he was attacked in Puerto Wilches, a town in the northeast department of Santander. He had been in a critical state since receiving at least six gunshot wounds as he boarded a bus to return home from work on 6 October. Robinson was a member of the USO oil workers union, which has partnered with Unite and UNISON on a project coordinated by JFC (watch a video here) to establish the union’s presence in a region where paramilitaries had previously impeded labour organising. In a statement, USO ‘call[ed] on the State to investigate and identify the intellectual and material authors of this attack which today became a murder so that they can be tried and convicted. This violence against trade union and social leaders must come to an end.’

8 November – Rural activist Luis Alberto Ramos Bertel was murdered in Montelíbano, department of Córdoba. He was a member of the ASCSUCOR peasants association and president of the community council in the village of San Antonio. He was attacked at around midday and suffered several injuries from being beaten and stabbed.

8 November – Paramilitaries intercepted human rights defender José Renteria as he travelled by motorbike, before holding a gun to his head, in the Piedras Cantan zone of Colombia’s port city of Buenaventura. José belongs to the Puente Nayero community, which has created a humanitarian zone to defend the human rights and social conditions of its residents. A paramilitary leader known as ‘Harri’ also reportedly threatened to kill the mothers of two young girls who his group recently attempted to abduct, which forced them to leave the zone.

8 November – Former FARC member Hugo Gilberto Córdoba was murdered in Samaniego in Putumayo. He is the 43rd former combatant killed in 2021 and the 291st since the peace agreement was signed five years ago.

9 November – Former FARC combatant Mario Alejandro Eslava Fuentes was murdered in Montserrate in the eastern region of Arauca. He was based at the Mariana Pérez transitional zone in Mesetas, department of Meta. INDEPAZ said he was the 292nd former combatant killed since entering the peace process almost five years ago, and the 44th in 2021.

9 November – Community leader Willinton Hernández was killed in La Montañita, department of Caquetá. He was president of the community council in Unión Peneya, where he had supported investigations by institutions created in Colombia’s peace agreement to locate victims of forced disappearance in a local cemetery. The Special Jurisdiction for Peace (JEP), the transitional justice court, said that ‘his support was decisive for victims to approach the JEP and the Search Unit [for victims of forced disappearance].’

9 November – The 86th massacre of 2021 was committed in the town of San José de Guaviare, department of Guaviare. The victims were three men and a woman.

10 November – Awa indigenous activist, 25-year-old Diego Pai Nastacuas, was confirmed killed in Tumaco, Nariño. He had been missing since being abducted by armed men on 25 October.

12 November – Nasa indigenous activists in Villagarzón, a town in Putumayo, received threats via social media posts which named Óscar Calderón, Andrés Felipe García and Baudalino Vitonás, among others. The zone has seen a high degree of paramilitary activity, including killings and threats.

12 November – The wave of massacres continued with the murders of three people in Puerto Leguizamo, Putumayo, the 87th such attack in 2021. Two of the victims were named as Sleider Gordillo España and Jaider Enrique Rivera Maestra, who sat on a local community council, whose members are regularly targeted by paramilitaries. The assailants subsequently killed a third person.

13 November – The Foundation for Solidarity with Political Prisoners (CSPP) reported that human rights defender Adriana Lizarazo had received death threats, which also targeted her family, purporting to be from the AGC paramilitary group. The messages told Adriana ‘it’s better that you leave [the region] if you want to live.’

14 November – An assault by ESMAD riot police injured three people during a rural protest in the Bolívar zone of Santander, northeast Colombia. The raid was against peasant farmers who, for the past 50 days, had blockaded a road to protest environmental damage and poor quality infrastructure and services in the region. Reports said the ESMAD agents had fired teargas and rubber bullets at unarmed protesters. They subsequently tried to prevent the injured people from being taken to hospital. One of the victims, Michelsen Vargas, later died of his injuries.

15 November – The 88th massacre of the year was committed in Antioquia, with the deaths of three members of the same family in the village of San Bernardo de los Farallones de Citará. The victims were 22-year-old Juliana Molina Galeano and her parents, Antonio Molina Vélez, who was 60, and Patricia Galeano. Several armed groups are active in the area.

17 November – An 18-year-old indigenous woman, Gloria Patricia Caviche Alos, was killed in Caldono, Cauca. She was found by a road with severe injuries and subsequently died in hospital. She was a member of the Sath Tama Kiwe community. A spokesperson for the Cauca Regional Indigenous Council (CRIC) said that 86 indigenous people had been murdered so far in 2021.

18 November – Social organisations warned about threats made against human rights defender Ayineth Pérez Gálan, who supports conflict victims in land restitution claims in the northern region of Urabá. An unidentified man arrived at her home and warned her to give up her work or face consequences. Urabá was one of the most violent parts of the country during Colombia’s conflict and continues to see human rights violations today.

21 November – At least six people were hurt when an explosive landed in the patio of a home in Argelia, Cauca, where fighting between rival armed groups has severely impacted on local communities.

21 November – Two armed assailants on a motorbike killed indigenous former governor Marcos Camayo Guetio at his home in the zone of Buenos Aires, Cauca. He had been governor of the Çxhab Wala Kiwe indigenous community between 2004 and 2010.

22 November – Human rights groups warned of illegal police raids on the homes and subsequent arrests of seven youth activists in the towns of Paipa and Sogamoso, department of Boyacá. Among those detained were Juliana Higuera, Sergio Forero, Julián Baron and Iván Ayala. They were reportedly targeted after taking part in an assembly which aimed to strengthen human rights and social rights for local communities.

25 November – Community leader Albert Mejía Portillo was murdered in Tamalameque, department of César, northern Colombia. He was involved in land claims for conflict victims and was shot while on his way to a meeting about land restitution.

25 November – A well-known youth leader, 26-year-old John Alexander Sierra, was murdered in the zone of Alejandría, department of Valle del Cauca. John was a peasant activist who coordinated rural community projects for young people. He was found with several gunshot wounds.

27 November – The Movement for Victims of State Crimes (MOVICE) warned of new paramilitary threats made against human rights defender Juan David Diaz. His father, Eduardo Diaz, was mayor of the town of Roble when he was assassinated in April 2003 shortly after reporting threats. Juan David has received a number of threats related to his activism.

28 November – Two young Nasa indigenous activists were killed in the Caldono zone of Cauca. They were named as Gersaín Campo Campo and Griceldino Poscué Cayapú, who were both aged between 20 and 26 (reports said there was uncertainty over their exact ages). They were shot as they left a public establishment.

30 November – The ACONC social organisation in Cauca warned that two men, Yamir Coavas Gómez and Wbeiner Murillo, had been abducted in the Lomitas zone of Cauca two days earlier. A child who was also taken was released the following day.

30 November – Police officers were filmed brutally assaulting a man who had tried to record their activities in a shop in Bogota. They knelt on his head and hit him several times, with the ordeal lasting for around 15 hours, according to witnesses.