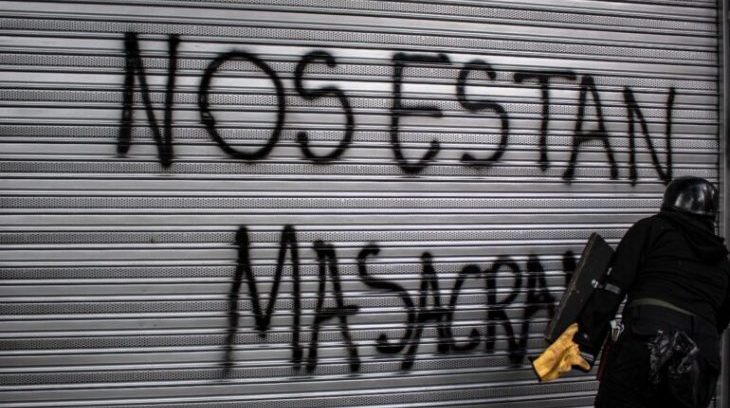 The opening weeks of 2021 were the most violent start to a year since Colombia’s peace agreement was signed in 2016.

Having registered over 90 massacres and over 300 social activists killed in the previous twelve months, according to national human rights organisations, the first month of the new year saw at least sevent massacres, 17 killings of social activists and five FARC former combatants killed.

Below is a summary of cases of violence in January 2021.

1 January 2021 – The 250th murder of a FARC former guerrilla since the signing of the peace agreement was committed in Briceño, Antioquia. Yolanda Zabala Mazo was based at the ETCR reincorporation zone La Plancha in Anorí. At around 4am, armed assailants abducted Yolanda, who was 22, and her 17-year-old sister Reina from their home, before killing them.

1 January 2021 – The first day of the year saw its second murder of a FECODE teacher trade unionist. Diego Betancourt Higuera was killed in Yopal, department of Casanare. Diego was a primary teacher at the college El Triunfo Tacarimena, where the attack was carried out.

2 January – FARC former guerrilla Duván Arled Galíndez Navia was killed in Cartagena de Chairá, department of Caquetá. He was visiting the region from his home in Cali and was shot dead while leaving a public establishment at around 10pm. He is the 251st FARC member in the peace process killed.

8 January – FARC former guerrilla Diego Yule Rivera was murdered in Cali. He is the 252nd FARC member killed, and the third already in 2021.

8 January – Two people were abducted by paramilitaries and then killed, with their bodies thrown in a river. The attack took place in Cáceres, Antioquia. One of the victims was named as community activist Edwin Antonio Indaburo.

10 January – Three people were killed and seven injured in a massacre in Tres Esquinas, department of Caquetá. Two of the dead victims were named as Yulian Sánchez and Kevin Malesoy. It is the first registered massacre of 2021.

10 January – The day’s second massacre was carried out in Betania, Antioquia, when armed assailants killed three members of the same family, two men and a woman, at their home.

10 January – Peasant activist Alfredo García was killed in the Ituango zone of Antioquia. Paramilitaries reportedly targeted him over suggestions he was formerly in the FARC.

11 January – Environmental defender Gonzalo Cardona Molina was killed in Tuluá, department of Valle del Cauca. He was a coordinator of the nature foundation ProAves Loros Andinos. The foundation said he was one of Colombia’s foremost experts on the endangered yellow-eared parrot, as well as the Andean wax palm, which is also threatened by habitat disturbance and disease. Colombia is statistically the most dangerous country in the world for environmental defenders, with Carlos the first killed in 2021. According to Global Witness, 64 environmental defenders were murdered in Colombia in 2019 (the most recent figures) of a global number of 212.

12 January – The third massacre of the year was committed in a commercial centre in Cali, leaving three people dead and one injured. Two of the victims were identified as 55-year-old Luz Edilma Castañeda and 39-year-old Fabio Alonso Lenis, while the third victim was an unnamed man.

15 January – The day’s second murder of a social activist was carried out in Yondó, Antioquia. Robinson Quino Bonilla was president of the community council in Caño Bonito and participated in illicit crop substitution programmes created in the peace agreement. He was killed while riding a motorbike.

16 January – Community leader and councillor William Rodríguez Martínez was murdered in Cucutá, department of Norte de Santander. He is the 11th social activist killed so far in 2021. The 42-year-old was shot several times close to his home.

17 January – Three young people were killed in an at a football pitch in Popayán, Cauca, the fourth massacre of 2021.

18 January – Death threats purporting to be from a group identifying as the Black Eagles named several community members in El Salado, Bolívar, and warned they would be killed that same night unless they left the area. The threats also referred to a paramilitary massacre committed against the same community in 2000 which left more than 100 people dead. ‘We started 21 years ago and you already know what we’re capable of,’ said the threats.

19 January – Three people, at least two of whom were teenagers, were killed in Taraza, Antioquia, the fifth massacre of 2021. The victims were 18-year-old Jhon Deivi Cuello Jaramillo, an unnamed 17-year-old and Duván Tapias, whose age was not confirmed.

19 January – In the preceding days, threatening pamphlets were distributed around the towns of Segovia and Remedios in Antioquia. The apparent paramilitary threats carried the pictures of 19 young people, including social leader Juan Camilo Vásquez, based in the towns and declared them ‘military objectives.’ The region is home to mining operations and has seen several armed groups vying for control.

19 January – Social leader Linda Díaz Romero was murdered in Cáceres, Antioquia. She belonged to the Association of Peasant Farmers and Agricultural Workers of Villa San Roque.

20 January – Social activist José Abadía Parra was killed in Perreira, department of Risaralda. José was a victim of forced displacement and his brother had previously survived a grenade attack in the same zone. José had previously been provided with a security detail due to the threats he faced but this had been removed. He is the 13th social activist killed in 2021.

21 January – Community activist Janeth Zapata was killed in Dos Quebradas, Risaralda. She was a member of the local community council and had received threats.

22 January – The president of the association of community councils in Cartagena de Chaira, Caquetá, received death threats. Amparo Bravo Ángel is renowned for her campaigning against corruption and deforestation. The anonymous message also threatened her children and other family members.

23 January – Youth worker and activist Julián Esneider Muñoz was killed in a public establishment in Cali. He was a member in the ‘Prisioneros de Esperanza’ (Prisoners of Hope) project which aimed to protect young people from crime and drugs.

24 January – FARC former combatant Juan Carlos Correa was killed in San Andrés de Cuerquia, Antioquia. He is the fourth former guerrilla killed in 2021 and the 253rd since the signing of the peace agreement.

24 January – Another FARC former combatant, 27-year-old José Alexander Quiñones Estacio, was killed in Tumaco, Nariño, the 254th such killing since the agreement was signed.

24 January – Five teenagers were killed in a massacre in Buga, Valle del Cauca. At least three others, a 60-year-old man and two more teenagers, were injured. The dead victims were identified as Juan Pablo Marín, Nicolás Suárez, Sara Rodríguez, Jacobo Pérez (who were all 18 years old) and 17-year-old Valentina Arias. At around 2am, armed men arrived at a property in the village of Cerro Rico and asked for the owner. They then opened fire on the group of young people gathered there. It is the sixth massacre of 2021.

25 January – Twelve councillors from the town of Argelia, Cauca, arrived in the regional capital of Popayán after receiving threats to their safety. It came nine days after their colleague, Fernando Meneses, was abducted in Argelia.

26 January – Two indigenous activists were killed in separate attacks in Toribío, Cauca. Alfredo Yatacue was shot dead while selling vegetables in the main plaza of the village of Tacueyó. The second victim’s body was found with torture marks in another village nearby, López.

26 January – Journalist Cristian Camilo Illera was shot dead in Ocaña, Norte de Santander. Armed assailants attacked him as he rode by motorbike. He is the second journalist killed in just over a month, after the murder of Felipe Guevara Henao in Cali on 27 December.

26 January – In an apparent eviction attempt, paramilitaries deliberately started a fire in an indigenous settlement in the San Rafael Warrojo zone of Puerto Gaitán, Meta. Reports said paramilitary leader ‘Cajuche’ arrived at the community with armed men, as well as a police officer and legal official. The community arrived in the zone some days previously as part of a collective land claim, under the legal protection of the National Land Agency.

27 January – The body of Argelia councillor Fermiliano Meneses was found in Cauca, twelve days after he was abducted in the town of Plateado. Two days earlier, twelve of Fermiliano’s council colleagues travelled to Popayán to seek safety after they received threats.

27 January – Former councellor Giovanis Carranza Castillo was killed as he travelled by motorbike in the city of Valledupar. He had represented the Radical Change party in Chiriguaná, department of César, from 2021 to 2015.

29 January – Rural organiser Arcenio Quinayas Ruiz was killed as he returned home in San Agustín, Huila. He was the treasurer of the community council in the village of Los Andes.

29 January – A massacre was committed in Tibú, Norte de Santander. Paramilitaries entered a farm where at least ten people were gathered and killed three of them. Shortly afterwards, paramilitaries displaced around 80 families from the nearby villages of El Socorro and El Seis. A JFC delegation visited Tibú in August 2018 to hear from local communities about human rights violations in the zone.

30 January – Miguel Uribe, a community council member in the Yarumal zone of Antioquia, was murdered. He is the 17th social activist murdered in 2021.

31 January – Another massacre reportedly took place in Satingo, Nariño. Three young people were killed and two others missing, according to Colombian media reports. One person survived.