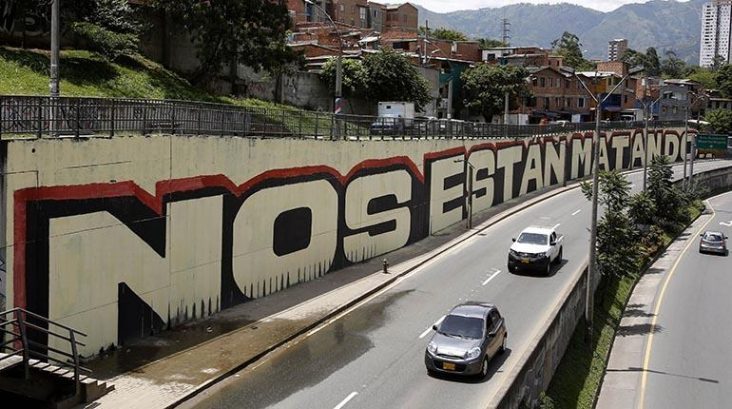 The year 2021 ended as it began: with extreme levels of violence towards social activists and the communities in which they organise. Targeted killings of individuals took place alongside the highest number of massacres (defined as a single incident with a minimum of three people killed) registered in Colombia since the signing of the 2016 peace agreement. In total, 171 social activists were killed and 96 massacres were committed in 2021, according to figures compiled by the INDEPAZ human rights NGO.

There is little action being taken by the current government to suggest that 2022 will see a reduction in the violence. However, elections this summer could bring about a new administration which will hopefully adopt a more constructive approach to tackling the ever-deteriorating security situation facing much of the country, as paramilitaries and other armed groups compete for territorial and economic control.

1 December – Awá indigenous activist Jhon Mario García Guanga was murdered in Tumaco in the southern region of Nariño. He was killed at around 3pm and discovered later that day by a search party. The Tumaco zone is heavily impacted by illegal mining, drugs trafficking and armed groups, which has had a devastating impact on the local population. Jhon is the 160th social activist murdered in Colombia in 2021.

1 December – At around 6.45pm, indigenous human rights defender Didier Narvaéz Avendaño survived an assassination attempt when two men opened fire at him in the Cajete zone of Cauca, one of Colombia’s most violent regions. He was struck once, in the shoulder. Didier is a coordinator in the human rights department of the Cauca Regional Indigenous Council (CRIC). In a statement, the CRIC said ‘we denounce and strongly reject any act that threatens life and physical integrity against human rights defenders, authorities and the Indigenous Guard.’ North Cauca, where the attack was committed, has seen extremely high levels of violence towards indigenous communities, including systematic killings of leaders and activists, as well as massacres. Several armed groups are present in the zone.

5 December – Community leader Armado de Jesús Castro was murdered in Florencia de Samaná in the regional department of Caldas, central Colombia. He was president of the community council in the village of Nariño. The 58-year-old was attacked by two masked assailants who fled before they could be apprehended. He had reportedly denounced the presence of armed groups in the region and the planting of illegal crops.

7 December – Human rights and LGBT rights defender Cristina Cantillo was murdered in Santa Marta, northern Colombia, having survived two attacks last year and having received numerous threats. Cristina, a well-known transgender activist, was attacked in the city’s Luis Carlos Galán neighbourhood. Although she had been allocated state protection, her bodyguards were elsewhere during the attack as Cristina visited her family. Reports said that the vehicle she had been allocated was out of service, which had increased her exposure to danger. Colombia has seen a steep rise in killings of LGBT people, particularly in the northern Caribbean region, where Santa Marta is located. Between 2017 and 2020, killings of LGBT people in the Caribbean region rose by a shocking 170 per cent.

9 December – Two members of the human rights NGO Temblores were forced to leave the country after fears they were being targeted by authorities. Temblores documented the extreme scale of human rights abuses committed by state agents during repression of National Strike protests in April and May, in which police killed at least 44 people, left over 100 with serious eye injuries and committed widespread illegal arrests, sexual assaults and incidents of violence against unarmed civilians. Temblores said that, on 6 December, it received information that two of its members had been targeted by surveillance and potentially harmful interaction, to which it responded with a request for information about any legal investigations of its staff, adding that if no formal investigations are underway, its staff should be left alone. The case has raised fears over further state harassment of human rights defenders.

12 December – Four people, all members of the same family, were killed in Mallama, Nariño, the 90th massacre of 2021. The killings were committed in the victims’ home.

14 December – Indigenous activist Olga Lucía Peña, her father and her niece survived an attack in Caldono, Cauca, when armed assailants opened fire at their vehicle. She had previously received threats. Olga is the sister of the former indigenous governor Sandra Liliana Peña Chocué, who was murdered on 20 April 2021. The CRIC indigenous organisation said it was possible that the attack was related to Olga’s campaigning for justice for her sister.

17 December – Armed assailants murdered peasant leader Huber Velásquez at his home in San José de Apartadó in Antioquia. Reports said the killers were members of the AGC paramilitary group which is highly active in the region, as well as in other parts of the country. Huber was a community organiser who recently led campaigns to demand improvements in local infrastructure, with regional underdevelopment impacting severely on the economic and social activities of the population. He had also denounced corruption around infrastructure projects. Some years previously, Huber had been forcibly displaced from his home by paramilitary violence.

19 December – Indigenous community leader Árnubia Yunda Cuetia, 36 years old, was killed in her home in the Cilia la Calera indigenous reserve in Miranda, Cauca. Her partner reportedly attacked her and was found with self-inflicted injuries. Arnubá had four children and was a member of the Sat’wexs y Khabwesx indigenous committee. The CRIC said ‘this femicide does not only affect her family, it also causes a major unbalancing to the territory, the community and the exercise of self-governance.’ Cauca has seen more killings of indigenous activists in recent years than any other part of the country.

23 December – Community leader Wilmer Ascanio was murdered in San Pablo in the department of Bolívar. Wilmer was president of the community council in the local village of Alto Cañobraval. The 45-year-old was shot dead while eating at a restaurant. According to his son, Wilmer had received threats since 2019 which had forced him to leave his home but authorities had not provided security measures.

23 December – The second killing of a community leader on the same day was carried out in San Perucho de Andes, a village in Antioquia. The victim was Gustavo Orozco Ramírez, 58 years old, who was attacked during a Christmas gathering. According to INDEPAZ, he is the 168th social activist murdered in 2021.

25 December – On Christmas Day, seven people were killed in one of the year’s worst massacres, carried out in the indigenous community of Bellavista, located in Puerto Leguizamo, Putumayo. A number of people were also reported missing, while at least 120 others, comprising 35 families, were forced to abandon the area following the killings. Local indigenous organisations called for urgent humanitarian assistance for victims of violence in the region.

26 December – Yet another massacre left three members of the same family dead, this time in Sácama in the department of Casanare. The victims were Ferley Velandia Fonseca and married couple Dámasco Velandia and María Fonseca. One other person was injured.

27 December – One of the Colombian Pacific region’s best-known musicians, Javier Esnaider Castillo Ortiz, was murdered in Barbacoas, department of Nariño. Javier was the singer of folklore collective Agrupación Changó, as well as a researcher into regional cultures.

29 December – Social organisations warned that paramilitaries, allegedly belonging to the AGC, had taken over the communities of Mina Mocha, Mina Fácil, Mina Piojo and Mina Mochila located in Montecristo, department of Bolívar. They also reported that security forces were operating in the zone but had done nothing to tackle the paramilitary incursion, with local residents at grave risk of forced displacement.

30 December – Combat between rival armed groups forced around 400 people from their homes in Mosquera, Nariño. Colombia has seen a sharp rise in forced displacement in 2021.

30 December – Three people were killed in Colombia’s 95th massacre of 2021. In La Gloria, department of César, armed assailants killed Yurledis Vilardy Sánchez, José Israel Reyes Prieto and Luis Armando Batute, who had reported receiving threats in the days prior to the attack. The killings took place in the home shared by the victims.

30 December – 20-year-old social activist Kendy Juliana Morales was reported missing in Medellin. She is a presenter on a local network and a renowned dancer. She was last seen in Medellin’s Santo Domingo neighbourhood.

31 December – The 96th massacre of 2021 was reported in Guamal, department of Magdalena, northern Colombia. The three victims were town councillor Willy Tinoco Angarita and two of his immediate family members.

31 December – In another brutal attack, carried out in San Pedro, department of Valle del Cauca, 31-year-old community leader María del Carmen Molina Imbachi was taken out of her home and killed in front of her family on New Year’s Eve. She is the 171st social activist murdered in 2021.