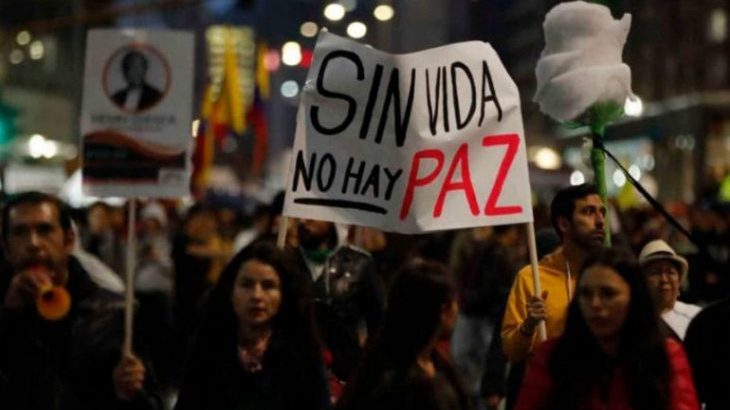 Here is JFC’s monthly update on cases of human rights violations carried out in August 2021.

1 August –Three people were murdered in Ríoblanco, department of Tolima, as they socialised in a bar. Two were named as brothers Gilberto Alonso Cruz Díaz, 37 years old, and Neison Cruz Díaz, 24.

4 August – Human rights defender Yuli Berrio reported that she had been displaced from her home in Candelaria, Valle del Cauca, after armed groups threatened to target her family. Despite warning authorities about the threats, she had received minimal security measures.

4 August – Trade unionist Roberto Moises Suaza received death threats and demands for money. He is a member of the ASIMTRACAMPIC union based in Cauca, which is an affiliate of the FENSUAGRO agricultural union. Since Colombia’s 2016 peace agreement, around 35 FENSUAGRO members have been murdered.

5 August – Indigenous leader Migual Muchavisoy was murdered in his home in Sibundoy in the southern Putumayo region. He was a traditional authority in the community of Kamentsá del Cabildo Biya. Community leaders called for support for close relatives of the victim, who, according to INDEPAZ, is the 104th social activist murdered in 2021.

5 August – Three Venezuelan nationals were killed a short time apart in the municipalities of San Miguel and Valle del Guamuez in Putumayo. They were named as 21-year-old Wilmer Johan González Escalona, Leonardo Junior Linares Mujica, 31, and José Gregorio Escalona Linares, 30. INDEPAZ said it was the 64th massacre of the year so far.

6 August – Three peasant farmers were injured after a soldier allegedly opened fire on them as they were protesting the army’s forced eradication of coca crops in El Retorno, department of Guaviare.

6 August – Armed assailants attacked a home in Soacha, close to Bogota, killing three men and a woman in the 65th massacre of 2021.

7 August – Former electoral candidate Felix Tomás Batta Jiménez, 30 years old, was murdered in the city of Arauca in the eastern region of the same name. He had represented the Arauca Citizens Movement in 2019 municipal elections and was a human rights defender who worked closely with conflict victims.

8 August – FARC former combatant Gilberto Samboní Quinayas, 48 years old, was murdered and his wife, Carmen Peña Rojas, injured in an attack in Isnos, department of Huila. They were travelling on a motorbike when they were attacked by armed assailants. Gilberto is the 32nd former combatant in the peace process to be killed in 2021, and the 281st overall since the peace agreement was signed in late 2016.

8 August – Community leader Francisco Javier Posada was killed in San Andrés de Cuerquia, department of Antioquia. The 54-year-old was president of the community council in the village of Montobello. He had previously received threats. The mayor of San Andrés de Cuerquia said ‘we will always remember him for his commitment towards issues in his community and his eternal smile.’

8 August – The 282nd murder of a former combatant in the peace process – and the second on the same day – was committed in Cartagena del Chairá, department of Caquetá. Hernán Estiven Vásquez was based at the transitional zone Heiler Mosquera in Putumayo and had studied medicine in Cuba as part of Cuban government-sponsored initiative to support Colombia’s peace process.

10 August – 50-year-old FARC former combatant José Harleyo Popayán was murdered in Leiva in the southwest department of Nariño. He was found with gunshot wounds having gone out earlier that day to play football. He is the 283rd former combatant killed since entering the peace process.

11 August – Teacher trade unionist Carlos Freddy Londoño Bautista was killed in Fuente de Oro, department of Meta. He worked at the education centre El Progeso and was well-known for his interest in and promotion of regional culture. The 60-year-old was shot dead while heading to the school, with the attack reportedly witnessed by a number of students. Teachers continue to face high levels of violence in Colombia, with close to 35 killed since the start of 2018 and many others threatened or forced from their homes and workplaces. Carlos’ murder came days after the main teachers union, FECODE, issued a warning over the high number of threats directed at teachers. According to INDEPAZ, he is the 107th social activist killed in 2021 and the 1,223rd since the signing of the peace agreement.

11 August – In an attack in Chita, department of Boyacá, armed assailants killed 60-year-old Arsenio Avendaño, husband to the mayor of the nearby town of Jericó, Mayerly Baez.

14 August – Community organiser Ofénix de Jesús Concha was intercepted and killed while travelling between the town of Puerto Libertador and the nearby village of La Terminal a la Piedra in Córdoba. Ofénix was a member of the community council in the Riosucio zone of Puerto Libertador.

17 August – There were new reports of mass displacement and mass confinement as the result of fighting between armed groups. In Medio San Juan in the western department of Chocó, around 1,150 people were forced from their homes. In the nearby communities of San Miguel and La Unión, more than 1,000 people could not leave their homes. There has been a major rise in forced displacement in 2021.

17 August – In Cali, the Methodist pastor Luis Miguel Caviedes was threatened as he walked through a central neighbourhood. The pastor has been the target of intimidation which human rights groups have linked to his support for journalist José Alberto Tejada of Cali grassroots media outlet Canal 2. José has faced threats and harassment over the network’s coverage of state violence during months of protests in Cali.

17 August – Students and academics at the Eafit University in Medellin received the latest in an ongoing series of threats signed by groups claiming to be paramilitary organisations the Black Eagles, the Gulf Clan and the Antioquia Anti-Communist Committee. At least one student previously had to leave Medellin after being followed and photographed by unknown people. In June, 11 students were named in a leaflet and told to leave Medellin within 72 hours, which most of them complied with. The threats are being linked to student activism around this year’s National Strike protests but, according to some of those targeted, the campaign of intimidation precedes the launch of protests in late April. The university has warned the National Ombudsman about the situation and also sought protective measures from the state-run National Protection Unit for those targeted but these have not been granted.

18 August – Two brothers were found dead in Cauca after they had gone missing three days earlier. Cristian Felipe and Yeison Fernando Pechené Arteaga were last seen in the town of Piendamó, where they are believed to have been intercepted by armed assailants on motorbikes.

19 August – There were no injuries following an attack on the security detail of former FARC commander Mauricio Jaramillo, who sits on the national committee of the Comunes (previously FARC) political party. Jaramillo also played a central role in drafting the 2016 peace agreement’s terms of reincorporation of former combatants. The attack was carried out in Popayan, Cauca, when armed assailants fired several shots which impacted against Jaramillo’s vehicle. Jaramillo was not present at the time, while his security detail were able to take cover to avoid injury. In response, the Comunes party called on the government to provide security guarantees to its members.

21 August – Armed assailants killed two men, community leader Eliécer Sánchez Cáceres and peasant farmer Hernando Sogamoso, in Cúcuta, Norte de Santander. Eliécer was vice-president of the community council in the village of La Punta and also ran a motorbike repair workshop. He had previously reported threats against him. He is the 109th social activist murdered in 2021.

21 August – Three people were killed in the 66th massacre of 2021, when armed assailants targeted a social gathering in Santander de Quilichao, Cauca. The victims all belonged to the same family. A fourth person was injured.

22 August – Jair Danilo Calderón Aranda became the 284th FARC former combatant murdered since entering the peace process in an attack carried out in San José de la Fragua, department of Caquetá. He had been based at the nearby transitional zone Hector Ramírez de la Montañita. A number of paramilitary and other armed groups are active in the area.

23 August – Student leader Esteban Mosquera was killed in Popayan, the regional capital of Cauca, where he had played an organising role in recent protests over inequality and state violence. The 26-year-old was shot dead yards from the Humanitarian Refuge for Life meeting, which had been organised by social activists and former combatants with the aim of strengthening human rights and peace. In 2018, Esteban lost an eye when he was attacked by the brutal ESMAD police unit, an event which sparked a wave of indignation towards the police and solidarity with the young man.

24 August – A massacre in Saravena, department of Arauca, claimed the lives of three people aged between 17 and 27. The attack occurred on the road linking Saravena with the village of Bajo Pescado. It is the 67th massacre of 2021.

24 August – Town councillor Mairon Chaverra was murdered in Zaragoza, Antioquia, where he represented the Conservative Party. He was a university lecturer and also worked as an advisor to the Antioquia Indigenous Organisation (OIA). The 38-year-old was shot dead at his home in the neighbourhood of Las Flores.

25 August – In Chocó, western Colombia, armed men believed to be paramilitaries murdered a Wounaan indigenous community member in the municipality of Bajo Baudó. Since 11 August, around 200 alleged paramilitaries have occupied the area, where they have threatened residents and restricted their movement. Human rights organisations have accused state forces in the zone of turning a blind eye to paramilitary violations of human rights.

25 August – Community leader Jesús Albeiro Gutiérrez was murdered in Cajibío, Cauca. He was a member of the community council of the El Plateado district of Argelia, a town near where the attack took place. He had previously been forced to leave his home due to violence. In recent months, Jesús had participated in National Strike protests in Popayan. He was reported missing on 21 August and his body found four days later.

28 August – Three men were killed and another injured in a massacre carried out near the city of Cúcuta, Norte de Santander. Days earlier, armed assailants attacked police vehicles in the same area. It is the 68th massacre of 2021.

29 August – Armed assailants attacked married trade unionists Rigoberto Cabanzo Arévalo and María Dorfenis López Cordón as they travelled by motorbike towards their home in the village of Caño Lindo, department of Meta. 38-year-old María was shot dead while Rigoberto was injured, with the attackers escaping before they could be apprehended or identified. As well as being members of the community council in Caño Lindo, both victims belonged to the SINTRAGRIM agricultural workers union of Meta, which is affiliated to the FENSUAGRO trade union. Since the signing of the peace agreement in late 2016, close to 35 FENSUAGRO members have been murdered, making it the most violently targeted trade union in Colombia. SINTRAGRIM said it ’roundly rejects whatever act of violence exercised against peasant farmers in the region.’ María is the 114th social activist murdered in 2021.

29 August – Human rights groups and trade unions denounced the arrest of FARC former combatant Harold Ordoñez Botero, who was detained in Cali after police accused him of being ‘Óscar’, the leader of a dissident group cited as responsible for numerous attacks in the region. As well as coordinating rural projects for former combatants, Harold works at the regional government of Valle del Cauca and is studying a Master’s degree at the University Javeriana of Cali. Human rights groups jointly called his arrest a ‘judicial setup’ designed to undermine the peace process.