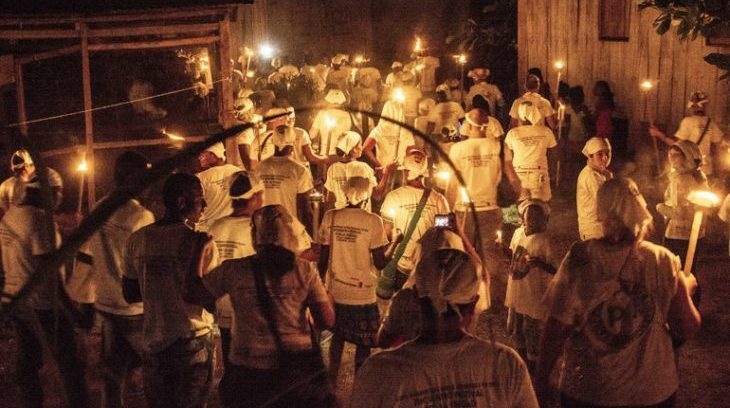 August was an extremely violent month in Colombia, with several massacres, killings and other human rights violations committed in different parts of the country. Here is a summary of cases.

1 August – A grenade was thrown at the Mayor’s Office in the city of Buenaventura, Colombia’s largest port. Nobody was hurt in the attack, which is being linked to Mayor Victor Vidal’s opposition to paramilitary groups which have long been present in the city.

5 August – At around 5.40am, peasant farmer and activist Erminso Trochez was killed while working alongside his 12-year-old son in the Caloto zone of Cauca. Erminso was a member of the ASTRAZONACAL workers association which represents peasant farmers and rural workers. He was also a community council member in the village of El Carmelo.

8 August – At least four peasant farmers were injured after police attacked them in the Guayabero region of Meta, southern Colombia. The attack came as local communities were protesting ongoing forced eradication of illegal crops, which appears to undermine the 2016 peace agreement’s focus on voluntary crop substitution. In addition, around 20 peasant farmers were arrested.

9 August – Two students were murdered in Leiva in the southwestern department of Nariño. Paramilitaries are believed to have killed Cristian Caicedo, who was 12 years old, and Maicol Ibarra, 17, after they had gone to their college to submit coursework.

10 August – The young daughter of two FARC former guerrillas in the reincorporation process, named as Michell Gómez, was found murdered in the Caucasia zone of Antioquia. Her mother had reportedly received numerous death threats in the days prior to her murder.

11 August – Five African-Colombian teenagers were tortured and murdered in the Llano Verde neighbourhood of Cali, Colombia’s third-largest city. Juan Manuel Montaño, Jean Paul Perlaza, Álvaro José Caicedo, Jair Andrés Cortes and Leyder Cárdenas Hurtado, all aged between 14 and 16, were killed after they had gone out to fly kites. Their families had moved to Cali after being forcibly displaced by violence from the Pacific region. Residents of Llano Verde have repeatedly warned authorities about the presence of paramilitary groups.

11 August – Indigenous Awá leader Javier Cortes Guanga survived an assassination attempt in Nariño, when armed assailants opened fire on the vehicle in which he was a passenger. He had reported threats against his family to authorities on numerous occasions.

12 August – The National Ombudsman’s office issued a warning over high risks to communities in El Rosario and Leiva in Nariño due to the presence of armed groups and following several acts of violence. The warning said 20,000 people in the zone are at risk of being killed, forced displacement, confinement, forced recruitment and sexual violence.

12 August – African-Colombian community leader Patrocinio Bonilla was murdered in Alto Baudó, Chocó. Paramilitaries abducted 15 people, including Patrocinio, before releasing them one by one. After letting everybody else go, they killed Patrocinio. He was a member of his local Community Council and of the social organisation National Agrarian Coordinator.

13 August – Soldiers killed an indigenous journalist as they violently attempted to disperse land protests in the Corinto zone of Cauca. Reports said Abelardo Liz was shot in the abdomen and shoulder and died in hospital. Two other journalists were wounded. The victims worked at indigenous radio network Nasa Nation Stereo (Nación Nasa Estéreo).

15 August – Two men were killed by paramilitaries in Magüí Payán. Videos that were distributed on social media showed the bodies being dismembered as two other men, apparently known to the victims, were forced to watch.

15 August – Eight young people were murdered in a house in Samaniego in the southwestern region of Nariño. Reports said that during the evening armed men entered the house, where those inside were socialising. They ordered everyone to lie face-down on the ground, before killing a number. At least two others were killed when they tried to run away. The attackers subsequently murdered an 18-year-old woman, named as Yessica, at a nearby location. The victims in the initial attack – seven men and one woman – were named as Byron Patiño, Andrés Obando, Rubén Ibarra, Laura Melo Riscos, Daniel Vargas, Campo Elias Benevides, Jhon Sebastián Cortes and Brayan Alexis Cuarán. The eldest victim was 27 and the youngest 17. Most of them were students.

18 August – Another massacre was committed in Nariño, after three Awá indigenous members of the Pialapi Pueblo Viejo community were found dead in the Ricaurte zone. The victims were named as Lumar Leonal Guanga, John Guanga and Eider Sebastián Guanga, all aged between 18 and 24.

18 August – Environmental activist Jaime Monge, 62 years old, was murdered at his home in Villacarmelo in Valle del Cauca. He led campaigns to protect natural resources in the Farallones national park from deforestation and illegal mining. His death occurred three months after his friend and colleague Jorge Oramas was also killed in the zone.

20 August – Paramilitaries sent death threats to human rights defender Yulieth Guzmán Cabria who is based in the southern Córdoba region, which has seen high levels of violence towards activists and community leaders.

21 August – Five people were killed in El Caracol in the eastern department of Arauca. Authorities were initially unable to reach the crime scene due to weather conditions.

22 August – Six people were murdered and two others abducted in Tumaco in Nariño, southern Colombia. The attack took place just hours before President Iván Duque arrived in the region for a security meeting. It was the third massacre in Colombia in less than 24 hours.

23 August – Yet another massacre is committed, with the deaths of three teenagers in the town of Venecia, department of Antioquia. Gunmen attacked five people inside a house, killing the three (aged 19, 18 and 15) and injuring a 28-year-old man.

24 August – Community leader Edis Care was murdered at his home in the Riosucio zone of Chocó. Although he had previously received threats, he had not been given any protective measures.

24 August – Three men were found dead in the Ábrego zone of Norte de Santander, northeast Colombia. It is the seventh massacre committed in under two weeks.

25 August – Community and land activist Rita Rubiela Bayona Alfonso was murdered in the Once de Noviembre neighbourhood of Santa Marta, northern Colombia. She was shot dead by two unidentified men on a motorcycle while at the parking lot where she worked. She had previously reported threats over her land campaigning.

28 August – Three people were killed in yet another massacre, the attack taking place in the Andes zone of Antioquia. Two young men, 27-year-old Arlex James Rodríguez Mora and 19-year-old Gilberto Alejandro Potes Valoi, and an unnamed 14-year-old boy were killed. It is the second massacre committed in Antioquia in the past week. Of the six total victims, five were teenagers.

28 August – Community activist Jhon Montero was murdered in Argelia, department of Cauca. He was travelling in the El Mango al Sinaí zone when armed men forced him from his vehicle before killing him.

29 August – FARC former guerrilla Jorge Iván Ramos was murdered in the Santa Rosa zone of the department of Bolívar, northern Colombia. He represented the FARC political party in the region and coordinated crop substitution programmes under the terms of the peace agreement. Formerly a commander of the FARC’s 37th Front in the Magdalena Medio region, Jorge Ramos is the second high-ranking FARC member murdered since the peace agreement was signed. He had two young children.

29 August – Two members of the FARC political party, Omaira Alcaraz and Fernando Gaviria, were murdered in San Pablo, department of Bolívar, not far from where FARC former guerrilla Jorge Iván Ramos was killed on the same day. At around 10pm, armed men arrived at Omaira’s home and bound her and family members. They then attempted to abduct Fernando Gaviria from his home, apparently to take him to the other hostages, but shot him dead when he resisted. They returned to Omaira’s home and killed her in front of her family. Both victims were prominent social activists in their community.

29 August – Two 17-year-old brothers were found dead after going missing two days earlier in Tarazá, department of Antioquia. Edil Alfonso and Wilmer Andrés Ramírez Martínez had reportedly denounced threats from armed groups and previously sought protection in Medellin. On the day of their disappearance, they had visited a police station to seek security measures.