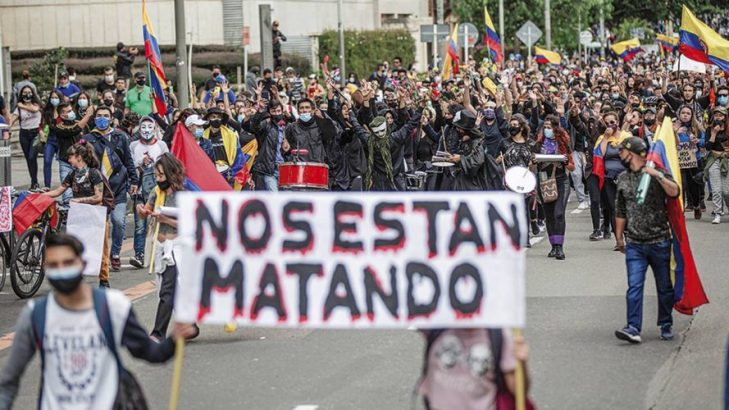 Social activists and former combatants in the peace process are still being widely targeted in many parts of Colombia. The first four months of 2022 saw the murders of more than 60 social activists and 18 former FARC combatants, while armed groups continued to impact heavily on communities in various parts of the country. Here is JFC’s monthly human rights update.

2 April – Former FARC combatant Edwin Andrés Sánchez Varón was murdered in San José del Guaviare, department of Guaviare, where he had been based at the Jaime Leal transition zone after entering the peace process. In 2020, he survived an attack in nearby El Retorno. Authorities have warned that armed groups are highly active in the zone, with several social activists and former combatants murdered in Guaviare in the past two years. According to INDEPAZ, he is the 12th former combatant murdered in 2022 and the 311th since the signing of the peace agreement in late 2016.

2 April – The year’s 31st massacre was carried out in Manaure in the northern department of La Guajira. Those killed were identified as indigenous leader Alexander Fonseca and two of his relatives. Reports said that armed assailants fired into the air outside a public establishment and, when the victims went to see what was happening, ambushed them with gunshots. Alexander is the 49th social activist murdered in 2022.

3 April – Another former FARC combatant, Carlos Humberto Siabato, was murdered, the second such killing in consecutive days. He was attacked at his home in Bogota, where he belonged to social organisations focused on improving conditions for former combatants and local communities.

3 April – Community leader José Pascual Quevedo Velásquez was murdered in Puerto Concordia, department of Meta. He was active in a number of cooperative social organisations. He was with friends in a public establishment when his attackers lured him outside by calling his name, where they proceeded to shoot him dead. He is the 50th social activist murdered in 2022.

4 April – Colombian opposition senator Iván Cepeda shared images of new threats made against the Historic Pact coalition, which is polling strongly ahead of May’s presidential election. It particularly targeted vice-presidential candidate Francia Márquez, who has received multiple threats, as well as other members of the coalition, several of whom have worked or met with JFC, including Cepeda, María José Pizarro, Alirio Uribe, Victoria Sandino, Luis Alfonso Castillo and trade union leaders in the CUT. ‘We will exterminate you like the rats you’ve always been,’ said the threat, which was signed by a group calling itself the Black Eagles.

6 April – The UTRASINUNP trade union representing security personnel in the state-run National Protection Unit, which provides security to at-risk individuals, reported threats made against its president.

7 April – Social activist José Marrugo shared images of text messages threatening to kill him and his family. He said that two armed men had followed and threatened his wife as she was shopping locally.

8 April – Former FARC combatant Yorelys Antonio Beltrán Ramos was murdered in Mutatá, department of Antioquia, along with 18-year-old Cristian Camilo Arboleda. Both lived in San José de León, a community founded by former guerrillas who were developing fish farming and other sustainable projects. Their bodies were found on the road from Mutatá to Medellin. In February 2020, a JFC delegation of European politicians and trade unionists visited San José de León to meet the former combatants resident there and hear about the challenges they face.

11 April – Social organisations warned that fighting between armed groups had forcibly displaced 160 families, totalling over 520 people, from the community of San Isidro in Buenaventura. Colombia has seen a major rise in forced displacement since the start of 2021, with people of indigenous and African-Colombian heritage making up the vast majority of victims.

13 April – Around 250 people were forced to leave their homes in the Santa Clara zone of Argelia, Cauca, because of fighting between armed groups and threats against residents. They sought refuge in nearby El Plateado.

14 April – Community leader Fabinson Ducuara Barreto was found dead three days after he had gone missing in La Montañita, Caquetá. He was president of the community council in the district of Horizonte and was a keen supporter of sports and cultural activities.

17 April – Two people were killed in the Escobal zone of Cucutá, a city located on the border with Venezuela. Armed assailants took the victims to a public park where they executed them. Reports said they had been brought from Venezuela and left in a public space as a message to other armed groups.

17 April – Armed assailants attacked a group of at least nine people, killing four of them, as they were travelling in a vehicle through Tame, Arauca. Among the dead were two children and two adults, identified as Elson Portela, who was 51, Ángel Julián Estrada, 48, nine-year old Delvis Arbey and four-year-old Briangis Yelina Prada. The five survivors, who included two more children, were left with serious injuries. According to INDEPAZ, it is the 33rd massacre of 2022. Reports said they group was attacked for travelling after a curfew imposed by armed groups.

18 April – Former FARC combatant Yolima Pérez Olaya, 34 years old, was murdered in Mesetas, department of Meta, where she had been reincorporating to civilian life under the terms of the 2016 peace agreement. Yolima belonged to different women’s organisations and was developing sustainable projects for former combatants, while she was also enrolled in educational programmes.

18 April – Peasant activist John Jairo Esquivel was killed in Saravena, Arauca, where conflict has intensified since the start of the year. He belonged to the ASONALCA rural organisation.

18 April – The former mayor of Briceño in Antioquia, José Danilo Agudelo Torres, was killed as he travelled through the area at around 9.30pm. He served as mayor from 2016 to 2019 and continued to belong to local organisations.

18 April – They day’s third murder of a social activist was committed in Arauca, where John Jairo Esquivel was also killed. Wilmer Hernández was a human rights defender, a trade unionist in the SINDEAGRO rural workers union and a member of the Communist Party. He had recently returned to his home after the volatile situation forced him to leave in January. He was taken from a school, where he had been participating in a workshop, and Hhs body was found soon afterwards in the zone of Puerto Nidia.

19 April – Community activist Andrés Eduardo Cruz Gómez was killed in Rionegro, Antioquia. He was a scout leader and involved in promoting recreational activities. Armed assailants shot him dead at around 7pm.

20 April – Former FARC combatant Brayan Stiven Ulcue Caso was murdered in Santander de Quilichao, Cauca. He had been based at the nearby transitional zone Carlos Perdomo. Armed men shot him at his home in Caldono.

20 April – Former FARC combatant Luis Mosquera was murdered in Miranda, Cauca. He was a member of the Memoria Viva trade union which was formed to represent bodyguards for former combatants in the peace process. Many members are themselves former FARC combatants. The union has faced high levels of aggression since it was founded last year. He was the second former combatant killed in Cauca on the same day.

21 April – The indigenous community of Siona Buenavista, Putumayo, warned that the army was carrying out forced eradication of coca crops and other operations which were impacting negatively on local residents. The community called on the army to observe Constitutional Court rulings on upholding fundamental rights of indigenous groups.

22 April – Two elderly people and a teenager were murdered in the year’s 35th massacre, which was committed in San Antonio del Tequendama, near Bogota. The victims were identified as 79-year-old Anita Díaz, 84-year-old Roberto Díaz and Jenny Díaz Paéz, who was only 17.

24 April – Five people were killed in Cartago, Valle del Cauca, in the 36th massacre of 2022. Armed men reportedly arrived at a home and attacked everyone inside. Two of the victims were identified as 49-year-old José Germán Chica and his uncle, 56-year-old José Fernando Chica. Two minors were also injured in the attack. Several armed groups are active in the area.

24 April – The year’s 37th massacre was carried out in Puerto Guzmán, Putumayo. Armed assailants killed four people early in the morning in the area of Las Perlas.

25 April – Two community leaders were murdered in Cantagallo, department of Bolívar. Armed assailants forced Erminson Rivera Henao and his borther-in-law José Obdulio Sánchez out of their homes before killing them. Erminson was president of the community council in the district of La Esperanza, while José had supported his election. Their deaths took the number of activists murdered in 2022 to at least 60.

25 April – Juan José Chilito, a former FARC combatant, was murdered in Puerto Guzmán, Putumayo, where there have been several recent killings and other acts of violence. He is the 18th former combatant killed in 2022, seven of which have been in April alone.

27 April – An armed group opened fire at a community event to commemorate Children’s Day in El Tarra, Catatumbo. Residents had gathered for a cultural activity in the municipal sports centre when explosives and gunfire targeted the building. One girl, an adult and two soldiers were confirmed injured. Social media footage showed people running for safety or hiding on the ground to avoid being hit. According to the mayor of El Tarra, there were more than 2,500 children present at the event.

29 April – Armed assailants murdered teacher Aureliano Corral in Mocoa, Putumayo. He was attacked at his home, with a woman also injured.

29 April – Community leader María Elvia Gómez Azate was killed in El Peñol, a town in Antioquia, where she was community council president for the district of La Magdalena.

30 April – Three people were killed in Bolívar, Cauca, in the 37th massacre of the year so far. The victims were named as 55-year-old José Benito, José Arcadio, who was 57, and Cayo Ruano Rivera, 59.

30 April – There was further violence in Cauca, one of the country’s most volatile regions, with the murder of indigenous leader Yesid Caña in the Caldono zone. He was known for creating a giant version of an indigenous bag for the 50th anniversary of the Cauca-based CRIC indigenous organisation. He was attacked in the La Aguada reservation where he lived.

30 April – Indigenous community activist María José Arciniegas Salinas was murdered in Puerto Leguizamo, Putumayo. The attack was allegedly carried out by paramilitary group Comandos de la Frontera, which is believed responsible for several killings in the southern region. They attacked the 27-year-old at night in the indigenous reservation El Hacha. María is the second woman activist killed on consecutive days.