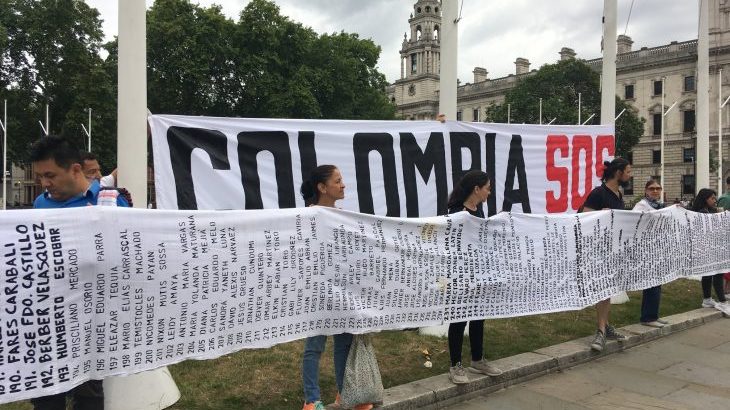 In its annual ‘Human Rights and Democracy’ report, the British government’s Foreign and Commonwealth Office has identified Colombia as a priority concern. The report, which assesses human rights in 30 countries around the world during 2019, says that human rights insecurity in the country is being exacerbated by failures to fully implement the peace process. Hundreds of social activists have been murdered in Colombia since the peace agreement was signed in November 2016,

Among other concerns raised in the report is the violence committed by state security forces towards journalists during nationwide protests in late 2019, which left 22 journalists injured. It also highlights widespread impunity over murders of human rights defenders, in which only 20 per cent of cases have resulted in convictions, with those found guilty the material killers rather than intellectual authors who order the attacks.

Human Rights and Democracy: the 2019 Foreign and Commonwealth Office report

In 2019, the protection of human rights in Colombia was hampered by the country’s continued struggle to ensure peace, 3 years after the government signed an historic agreement with the Revolutionary Armed Forces of Colombia (FARC). The situation of the country’s human rights defenders (HRDs) remained a particular concern, and despite minor improvements in the conviction rate, the level of violence against HRDs continued to be worryingly high.

The UN High Commissioner for Human Rights reported that 107 HRDs were killed in 2019, compared to 110 in 2018. While each attack was a product of its local context, the violence was particularly concentrated in areas with high levels of multidimensional poverty, where organised criminal armed groups were fighting for control of illicit economies following the withdrawal of the FARC, and where the state has little presence. The Cauca region saw the most HRDs killed, approximately 30. A disproportionate number of indigenous leaders were caught up in the violence, as different armed groups disputed local coca cultivation and drug trafficking routes.

The Colombian government reiterated its commitment to protecting HRDs, and there were some advances. Impunity fell, albeit from a high level, helped by the improved capacity of the Attorney General’s special unit that investigates violent attacks against HRDs. It reported convictions in 20% of the cases it investigated in 2018, up from 14% in 2016. However, the overwhelming majority of convictions are of those who carried out the attacks (usually hired hitmen), rather than of those who ordered them, making it difficult to break the cycle of violence.

October’s regional elections were the most violent for at least 10 years, with 22 candidates killed 49. The murder of Karina Garcia – a candidate for mayor of Suárez in Cauca – along with 5 others on 1 September shocked the country. Although election day itself was peaceful, the government confirmed that its National Protection Unit had been supporting over 1,100 candidates deemed under threat.

The UK directly supported around 450 at-risk HRDs in 2019, through training to improve protection and security, as well as legal support to fight impunity in cases of attacks. More widely, as part of our package of support to the peace deal, the UK helped strengthen the capacity of the Attorney General’s Office, including the special unit that deals specifically with attacks on HRDs. We have also provided support to environmental and land-rights defenders, and helped strengthen the Ombudsman’s early warning system and institutional follow-up mechanisms.

The full implementation of the peace deal with the FARC remains the country’s best hope for improving the security of social leaders, including HRDs, especially the formally established pillars 1 (integrated rural reform) and 4 (substitution of illicit crops) of the agreement. Despite the government’s overall commitment to the peace deal, it is in these 2 areas where implementation is the slowest, because of budget constraints, vested interests, and the reality on the ground. The latest UNODC figures indicate that coca cultivation fell slightly in 2018, according to the UNODC. However, productivity increases (some farmers report being able to harvest their coca bushes more than 5 times a year) mean cocaine production, and therefore illicit financing, were at historic highs.

In 2019, the UK continued to provide support to help Colombia address the legacy of sexual violence from its 53-year internal conflict. Over the past 3 years, UK support to La Red de Mujeres Víctimas y Profesionales, a network of survivors of sexual violence, has helped document 1,200 new cases, which are now before the transitional justice system. Gender-based violence remains a serious problem in Colombian society. The UK funded work to train rural medical professionals in how to attend cases of sexual violence, including with a view to preserving evidence to encourage convictions.

In 2019, Colombia ranked 129th out of 180 in the Reporters without Borders Media Freedom Index, with the main threats being violence and self-censorship. During nationwide protests that followed the 21 November national strike, the Colombian Press Freedom Foundation reported 27 attacks on members of the press. They included 22 by security forces, amid widespread criticism from civil society organisations of excessive use of force. In 2019, the UK provided financial support to the Press Freedom Foundation, supporting efforts to train journalists in self-protection mechanisms. In the run-up to October’s regional elections, we helped broker a pact in which 9 political parties undertook publicly not to spread disinformation.