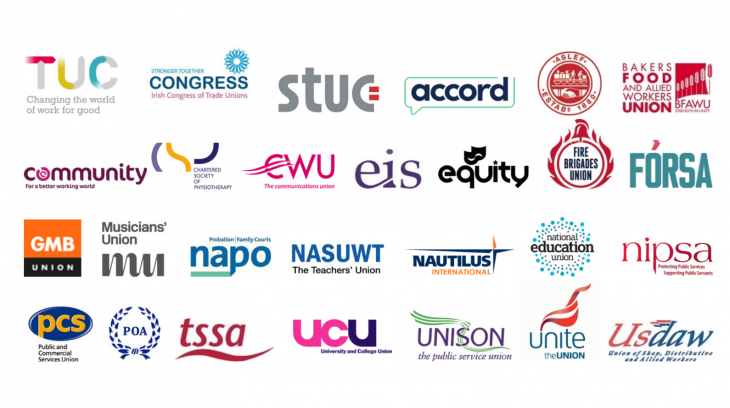 Trade unions in Britain and Ireland have written to Colombia’s Human Rights Commissioner today to express their ‘extreme concern’ following an increase in massacres and murders of social activists and former guerrillas who entered into the peace process. According to Colombian human rights organisation INDEPAZ, 205 social leaders and human rights defenders have been murdered in 2020.

In the letter, union leaders also condemned the recent actions of the Colombian police after they opened fire on unarmed protestors in Bogota reportedly killing up to thirteen people.

You can read or download the full letter below.

RE: Human Rights situation in Colombia

As trade unions in Britain and Ireland representing millions of workers, we are writing to express our extreme concern at the human rights crisis taking place in Colombia. We have strong and long-standing relations with the Colombian trade union movement and have worked for many years to support those working in defence of peace and human rights in the country – particularly through our London-based campaign organisation, Justice for Colombia.

We have been shocked over recent months as each day seems to bring horrifying new accounts of violence committed against activists, young people, trade unionists and the same communities most historically impacted by conflict and state abandonment.

In August alone, at least nine massacres were committed in Colombia, in which the vast majority of victims were young people, such as the five African-Colombian boys killed in Cali on 11 August; the eight young people murdered while socialising in Samaniego on 15 August; the three Awá indigenous men killed in Nariño on 18 August; and the three massacres that claimed 17 lives in a 24-hour period over 21-22 August.

Other alarming cases include the murder of two high school students as they were taking a school project to their teacher on 9 August; the abduction and murder of African-Colombian community leader Patrocinio Bonilla on 12 August; and the death of indigenous journalist Abelardo Liz who was allegedly killed by soldiers while covering protests on 13 August.

We condemn in the most emphatic manner the actions of Colombian police after they fired indiscriminately at unarmed protesters following the police killing of lawyer Javier Ordóñez on 9 September. According to the UN High Commissioner for Human Rights, Michelle Bachelet, ‘excessive use of force’ by police could have killed up to 13 people and injured 300, including 77 bullet-related injuries.

The cases detailed here represent only a few of the many that have claimed so many lives in Colombia since the peace agreement was signed in November 2016. The United Nations Verification Mission in Colombia has documented the murders of at least 424 human rights defenders and community leaders since the start of 2017, in addition to 215 FARC former guerrillas in the reincorporation process. The Colombian NGO Institute for Development and Peace (INDEPAZ) registered 878 social leaders killed during the same period.

The peace process brought hope to millions of people, but unless urgent action is taken Colombia faces an irreversible return to its violent past. The UN Verification Mission has repeatedly emphasised the peace agreement as the most effective means of reducing the endemic violence sparked by the proliferation of paramilitary successor organisations and other armed groups across much of the country. While the peace agreement specifically addresses the dismantling of armed groups through the National Commission on Security Guarantees, we note that the UN has warned on several occasions that the Commission must be convened with far greater frequency to ensure its effective functioning.

We are also greatly alarmed at the many allegations of serious human rights violations committed by state security forces. These include extrajudicial killings such as that of former combatant Dimar Torres in April 2019, over which one soldier has been convicted and others investigated; the illegal monitoring of opposition politicians, journalists and trade unionists; and the military raid in August 2019 which killed several children despite authorities being warned of the presence of minors in the area. The UN’s Office of Human Rights has called for independent and transparent investigations into alleged abuses by state agents.

The British and Irish trade union movements are committed to supporting Colombia in their international campaign work in defence of worker rights and human rights. We therefore write to you today to respectfully ask that you take all the necessary steps to address the issues raised in this letter: most specifically, we ask that in your role as Human Rights Commissioner you advance with your government the requirement of full investigations into the intellectual authors of crimes committed against social leaders; the urgency of an intensification in implementation of the peace agreement, particularly in relation to human rights measures; the need for re-initiation of peace talks with the ELN; and full accountability for all state actors involved in human rights abuses.

We are grateful for the time taken to consider this letter and look forward to further correspondence.