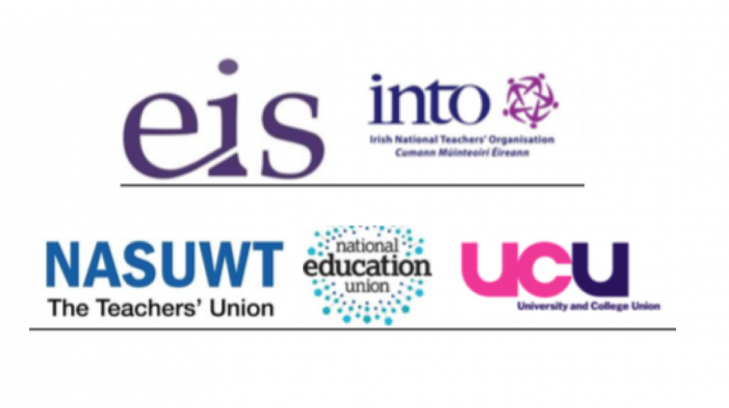 Education unions in Britain and Ireland have written a joint-declaration in support of Colombian teachers, including the FECODE teachers union, following an increase in violence towards teachers. Released on 17 February 2020, the statement denounces the violence and the lack of security guarantees for Colombian trade unionists, while calling on the Colombian government to implement in full the 2016 peace agreement.

Read the full statement below.

As education trade unions in the UK and Ireland, we are greatly concerned over ongoing violence against Colombian teachers. The Educational Institute of Scotland, the Irish National Teachers’ Organisation, the NASUWT UK-wide teachers union, the National Education Union and the University and College Union collectively represent almost one million teachers and education workers. Our unions have supported Colombian trade unionists through our work with Justice for Colombia (JFC), and many of our members have met with the FECODE teachers union and other trade unionists on JFC delegations to Colombia.

Despite the 2016 peace agreement, and the optimism this instilled across Colombian society, teachers continue to face aggression and stigmatisation. The International Trade Union Confederation found that thirteen teachers were murdered in 2018, a year in which murders of Colombian trade unionists more than doubled to 34 from fifteen the previous year, accounting for almost two-thirds of 53 worldwide cases. More teachers were murdered in 2019, such as school principal Orlando Gomez who was abducted from his workplace and killed last August.

This human rights crisis has continued into 2020. On 7 February, teacher Sandra Mayerly Baquero was killed in Arauca, northeast Colombia. The following day, Carlos Rivas, the former director of FECODE, survived an assassination attempt when shots were fired at his car. Also in early February, 25 teachers were forced to close the school where they work and leave their homes due to threats in Atlantico, northern Colombia. FECODE says another fifteen of its members were displaced in Tarazá, Antioquia.

Amid this climate of escalating aggression – with at least 35 social activists, including trade unionists, murdered already this year, alongside the hundreds killed since the peace deal was signed – it is extremely concerning that FECODE has criticised the government for ‘not caring’ about the lives of teachers. The ongoing National Strike, which has united Colombian trade unions, social movements and peace advocates, is demanding an end to the human rights crisis impacting communities across the country. The tragic start to 2020 shows that, if anything, the situation is deteriorating.

The United Nations again said in January that full implementation of the 2016 peace agreement is the most effective means of tackling the human rights crisis. The National Strike also lists full implementation as a core demand. We reiterate our support for the Colombian peace agreement and will continue to lobby our governments to work alongside their Colombian counterpart to ensure that a stable and lasting peace becomes a reality for all Colombians.

Furthermore, we call on the Colombian government to take urgent measures to tackle violence against teachers and social activists, including implementation of the peace agreement’s security provisions around dismantling armed groups and establishing protective mechanisms in unstable regions. Universal education is a basic human right which benefits entire societies: attacks on teachers are therefore an attack on everybody.

In the words of the ancient Chinese philosopher Confucius, ‘Education breeds confidence. Confidence breeds hope. Hope breeds peace.’ We are proud to stand alongside our Colombian colleagues in their pursuit of a brighter future.