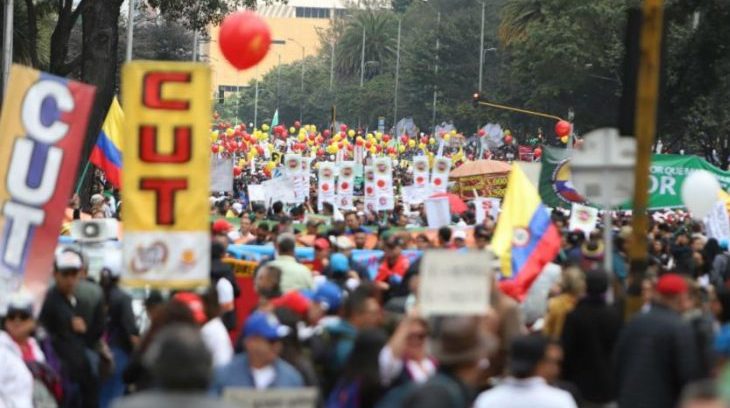 At least 18 trade unionists have been murdered in Colombia this year, while many others have suffered threats, attacks, harassment, arbitrary detention and forced displacement. At least two were also forcibly disappeared. The new figures published by Colombia’s National Trade Union School (ENS), which monitors the situation facing trade unionists in the country, show the high levels of violence have continued to impact organised labour in 2020.

In total, the ENS has registered 130 violations committed against trade unionists, with 120 against men and ten against women. Almost nine out of ten cases (88.46 per cent) were targeted at trade unionists in positions of leadership or senior responsibility.

The ENS says that threats to trade unionists were exacerbated through the military’s illegally monitoring them (which caused the human rights secretary of the CGT trade union confederation, Hugo Correa, to leave the country) and ongoing verbal attacks and stigmatisation of the FECODE teachers union.

Education was the sector most targeted in 2020, with 43 cases. The next worst-affected sectors were mining (31), rural (28) and communal services (15). Six of Colombia’s 32 departmental regions accounted for almost three-quarters of cases, with 25 individual cases registered in Bogota. Other regions affected were Cauca (23 cases), Meta (17), Nariño (12), Huila (11) and Atlántico (seven).

The report also names at-risk FECODE members whose protective measures have been removed, including Isabel Olaya, Martha Alfonso and Domingo Ayala, while Luis Edgardo Salazar was given a panic button and Juan Carlos Martínez lacked any form of security scheme.

In the fifty years between 1 January 1971 and 30 November 2020, 3,277 Colombian trade unionists were murdered, according to the ENS research. Overall, more than 15,000 violations were committed over the years. Despite Colombia’s horrific record of violence towards trade unionists, the figures for 2020 show that little has been done to ensure the security of those who organise in defence of their labour, community and social rights in the country.