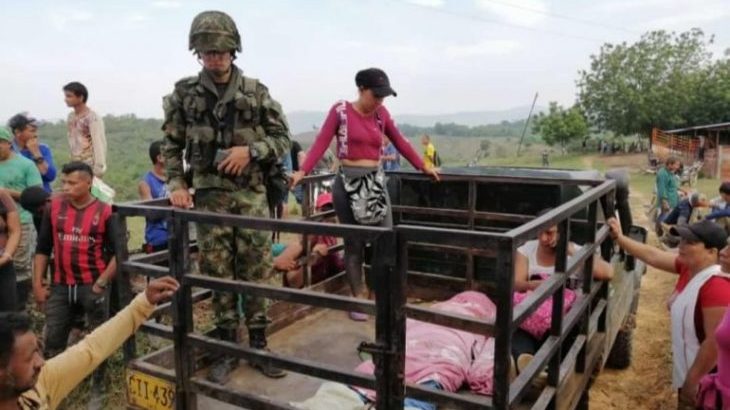 The army has again opened fire on rural communities in the northeastern Colombian region of Catatumbo as they protested against forced erradication of coca crops. Emerito Digno Buendía was killed and two other men were injured, according to the ASCAMCAT human rights organisation based there.

It follows the army’s ongoing forced eradication of coca plantations in contravention of agreed substition programmes contained in the 2016 peace agreement which has generated protests from rural communities. On 26 March, soldiers also killed 20-year-old Alejandro Carvajal inside his home in Catatumbo.

In the latest incident on Monday 18 May, soldiers opened fire on a group of rural workers, killing Emerito Digno Buendía, and injuring Juan José Orozco and Jimmy Alerto González. The two surviving men were taken to hospital, where they remain.

The army has been conducting forced eradication operations in Catatumbo since March and has sought to forcibly repress the resulting protests. According to ASCAMCAT, soldiers threatened to open fire on the unarmed protesters and then proceeded to do so when the protests continued.

44-year-old Emerito Digno Buendía was father to six children. He sat on the Community Council in the zone of Tutumito and was a member of the COCCAM association for coca farmers, whose members have faced high levels of violence over their involvement in substitution programmes. COCCAM has registered more than 50 of its members killed since the peace agreement was signed in November 2016.