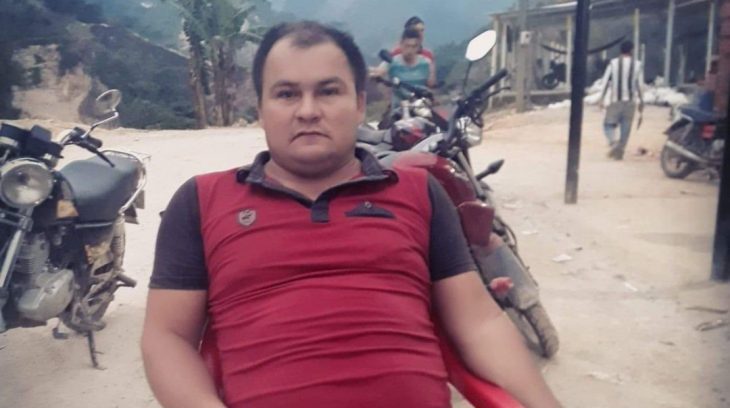 A Colombian army general has admitted that soldiers murdered the FARC former combatant Dimar Torres on 22 April in Catatumbo, northeast Colombia. General Diego Villegas, who commands forces in the region, called for an investigation into the incident and apologised to the community where Dimar Torres lived.

The general’s account contradicts Colombian defence minister Guillermo Botero, who had previously claimed that Dimar Torres was accidentally killed after becoming embroiled in a struggle with an army patrol.

Like thousands of other FARC members, Dimar Torres was participating in the reincorporation process to transition to civil society following the signing of the 2016 peace agreement. He lived with his partner and children in the community of Convención in Catatumbo.

While returning from work, he was intercepted by soldiers on 22 April. Community members subsequently heard gunfire and went to investigate. Soldiers told them they had not seen Dimar or heard any shots. Shortly afterwards, the community members found Dimar’s tools partially buried in a shallow pit. His body, bearing signs of torture, was then discovered nearby.

After the killing stoked public uproar, a group of senators who form the Peace Commission visited Catatumbo to speak with the community. They concluded that Dimar Torress was the victim of an extrajudicial execution committed illegally by the armed forces. The existence of an unmarked grave and witness testimonies suggest there was an attempt to cover up the crime.

‘The murder of Dimar Torres at the hands of the National Army constitutes a State crime against peace, the Prosecutor’s Office must promptly establish
both the intellectual and material criminal responsibilities of these very serious acts against peace in Colombia’, said Senator Antonio Sanguino.

Since the peace agreement was signed, 129 FARC former combatants have been murdered in Colombia.