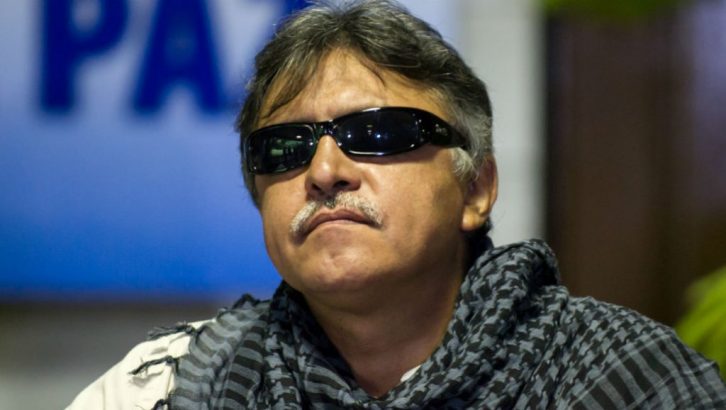 The United States has said it will not provide evidence to Colombian authorities in the case against Colombian peace negotiator and congress member-elect Jesús Santrich, who remains in prison following his arrest on drugs trafficking allegations almost one year ago, despite the complete absence of evidence against him.

The arrest on 9 April 2018 came after a US court issued an arrest warrant and extradition request against Santrich. The FARC and Santrich’s supporters have said that he is the victim of trumped-up charges designed to undermine the peace agreement and the FARC’s political participation.

Santrich was a key member of the FARC negotiating team during the 2012-2016 peace talks in Havana, Cuba. Under the terms of the agreement, Santrich should have entered the Colombian congress last year but instead was arrested just hours after meeting with a JFC Peace Monitor delegation of British and Irish MPs and trade unionists.

The arrest sparked major concerns that the peace process could break down due to legal insecurity around senior FARC officials, with the situation exacerbated by congressional efforts to impede or halt core elements of the agreement and the high levels of political violence which continue to impact many parts of the country.

On 1 March, the United States announced it would not send evidence to the Colombian Attorney General’s office, after the Special Jurisdiction for Peace (JEP), which was created under the terms of the peace agreement to investigate crimes committed during the conflict, requested access in order to rule on Santrich’s possible extradition. The JEP ruling hinges on whether the alleged crimes were committed before or after 1 December 2016, at which point amnesties become void and any crimes committed after that point fall under the jurisdiction of the standard justice system.

However, the JEP also faces uncertainty as the government of President Ivan Duque has not enacted it into law. The FARC and other Colombian politicians and activists have said that the JEP is critical to consolidating peace in Colombia, as it will help victims learn the truth about the conflict and prevent any future  reoccurrence. Since the peace agreement was signed in November 2016, the JEP has faced strong obstacles and criticism from political sectors opposed to its implementation.

On the same day as the US said it would not send evidence, a former JEP prosecutor, Carlos Beremo, and four other people were arrested for allegedly receiving bribes to intervene in the Santrich case, an incident which sparked controversy in the Colombian press. On 6 March, JEP president Patricia Linares categorically refuted the possibility of Bermeo being able to influence any of the court’s proceedings. The Inspector General has since confirmed there is no link between Bermeo and Santrich.

Justice for Colombia continues to call for Jesús Santrich´s release so that he may fill his post in the Colombian congress as a representative of the FARC political party and advance with the important task of implementing the peace process which he helped bring to fruition.